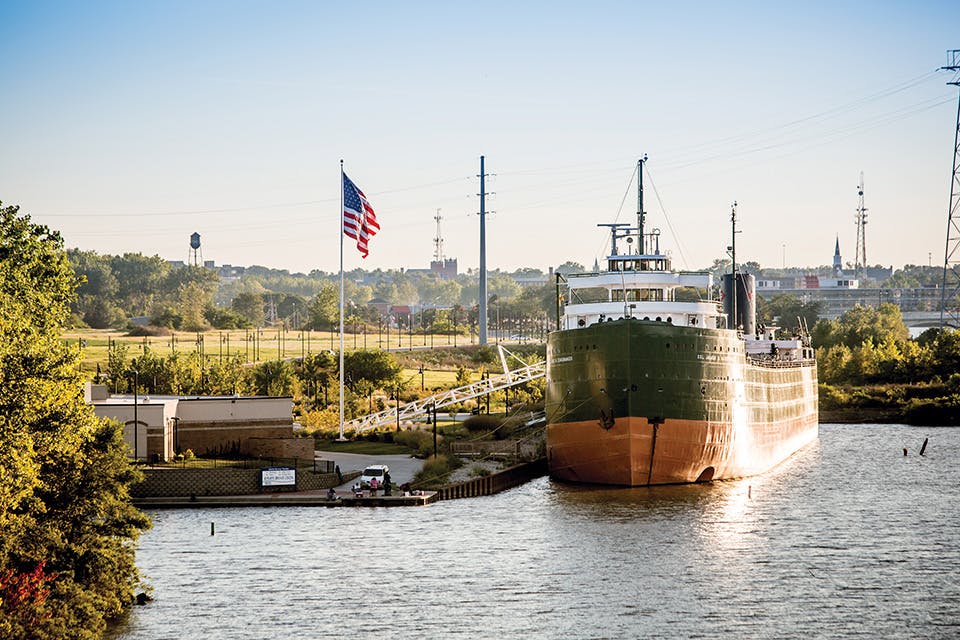 These three driving tours share the story of the National Road, the wonders of the Hocking Hills and the heritage of life along Lake Erie.

Authorized in 1806 as the first interstate highway built entirely with federal funds, the National Road ultimately stretched from Cumberland, Maryland, to Vandalia, Illinois. By 1830, the Ohio portion had reached Zanesville, before extending to Columbus in 1833 and Springfield by the end of the decade.

The National Road & Zane Grey Museum in Norwich shares the story of the route’s evolution. The museum is also dedicated to novelist Zane Grey, a Zanesville native whose great-grandfather Ebenezer Zane helped blaze a frontier path known as Zane’s Trace through this part of Ohio in the late 1790s.

Along with an original Conestoga wagon, stagecoach, Model T and 1930 Peerless luxury car, the National Road portion of the museum houses a detailed, 135-foot-long diorama depicting the entire route, from Maryland to Illinois. Ohio artist Beverly Moseley oversaw the creation of each handcrafted piece for the diorama, which went on display in 1973.

Ohio’s portion of the National Road was also essential in connecting people with the state capital of Columbus. Built between 1839 and 1861, the Greek Revival style Ohio Statehouse is credited to five principal architects who worked on various elements of the building’s design over those years. Daily guided tours of the beautiful building run weekdays from 10 a.m. to 3 p.m. and weekends from noon to 3 p.m.

After the National Road reached the western edge of Springfield in the late 1830s, disagreements over the path it should follow westward meant that this Clark County community sat at the endpoint of the route for over a decade. Today, most of the first floor of the Clark County Heritage Center houses a National Road Gallery that traces the route’s impact on Springfield. A mix of artifacts and information shares how both the city and the nation developed as the National Road did. 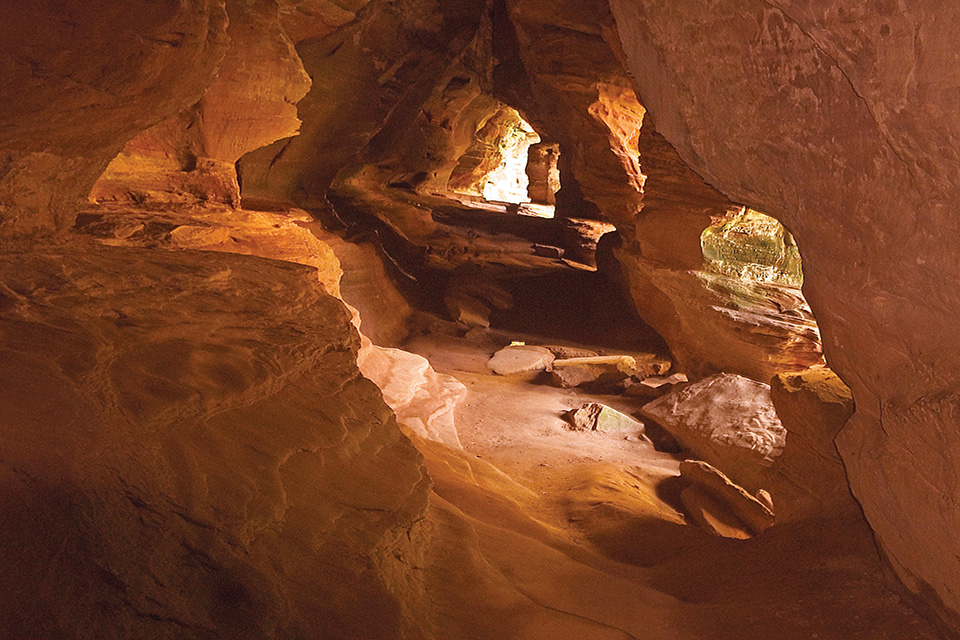 For those who want to experience the Hocking Hills’ variety of natural wonders, this drive over winding roads offers incredible scenery and a sampling of the caves, waterfalls and gorges for which the region is known.

Covering 26.4 miles, the Hocking Hills Scenic Byway follows parts of state Routes 374, 664 and 56. It passes the six sites that make up Hocking Hills State Park as well as historically significant locations, such as the remains of the camp that housed the Black Civilian Conservation Corps, which created trails, built structures and planted trees in the area. There is a lot to explore, but for travelers looking to hit some of the natural highlights over the course of an afternoon drive, these three beautiful spots are a good place to start.

The Rock House offers the chance to step inside the region’s only true cave that is accessible to the public (others in the park are recess caves). A pathway leads to large, window-like openings in a cliff of black hand sandstone that invite visitors to step inside and explore the tunnel-like space. The darkness of the cave contrasted with the natural light spilling in through the large openings makes for dramatic photographs.

The most well-known destination within Hocking Hills State Park, Old Man’s Cave is a big draw for good reason. The area offers not only the dramatic recess cave that gives the place its name, but also trails that descend into and along the top of the gorge. Depending on the route hikers take, they can see natural features such as the swirling Devil’s Bathtub and take in views of the waterfalls that flow at opposite ends of the gorge.

The new Hocking Hills Visitor Center at Old Man’s Cave opened in 2019, and along with trail maps and park ranger guidance offers insight into the natural history and geology of the area. Along with 8,500 square feet of indoor space, the center features upper and lower covered patios that cover an additional 5,000 square feet.

Cap off a day trip through the Hocking Hills with a visit to Ash Cave, a recess cave with a 700-foot, horseshoe-shaped rim that sits at the end of a short and flat trail. Visitors walk beneath an enormous rock overhang and over soft, sandy terrain as they experience a natural environment unlike any other in the state. 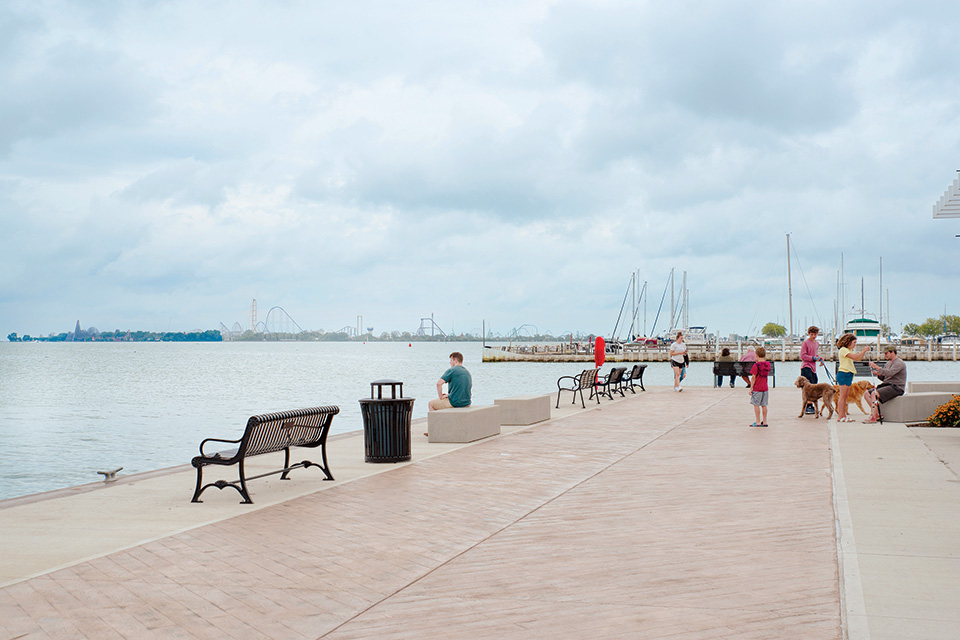 This route, which traces the Lake Erie shoreline across the northern edge of Ohio, covers 293 miles and passes through cities and towns that have been shaped by their proximity to our state’s greatest natural resource. Whether you’re looking for beaches or boat lines, lighthouses or lake views, there is much to explore along this scenic byway. The route extends from Conneaut to Toledo and can easily be broken up into a few smaller trips that let travelers take in all the route has to offer.

Those who think of Cleveland as heavy industry and harsh winter weather may be surprised to learn that the city has a beautiful sand beach just west of downtown. Edgewater Beach has long been a local favorite, but the Cleveland Metroparks taking over the property in 2013 for its Lakefront Reservation gave the place new life.

Along with the sand beach, which includes a dog-friendly portion, there is the Edgewater Beach House, which offers an inviting second-level patio, a main-level concession stand and even a place where you can grab a locally made craft beer.

Farther west along U.S. Route 6 is the city of Sandusky, long known as the home of Cedar Point. But downtown Sandusky has undergone a revival in recent years that has reconnected it to the lakefront and drawn new businesses that give the area a welcoming, family-friendly, shore-town atmosphere.

The construction of Jackson Street Pier may be the most visible example of this renewal, as local leaders turned a former parking lot into a waterfront recreation space for the public. The dock for the Jet Express boat line is located nearby, and the Sandusky Bay Pathway runs along the shore. (It will ultimately extend the length of the city’s 12-mile waterfront.)

Those fascinated by our freshwater natural resource will want to visit the National Museum of the Great Lakes. Located on the western edge of the Lake Erie Coastal Ohio Trail in Toledo, the museum presents an all-encompassing view of the Great Lakes, from its natural history to the rise of industry.

The museum features more than 300 artifacts and 40 hands-on exhibits, including the 617-foot iron ore freighter the Col. James M. Schoonmaker Museum Ship and the historic Museum Tug Ohio. The pilothouse from the St. Mary’s Challenger, which sailed the Great Lakes for 107 years, is the museum’s newest addition.

“The [Schoonmaker] has been completely restored, tip-top to bottom,” says Kate Fineske, senior director of institutional advancement for the museum. “It’s an amazing vessel just to go through, explore and see what sailing on the Great Lakes looked like in the early 19th century.”

For more information on these routes and other Ohio Byways across the state, visit ohiobyways.com.