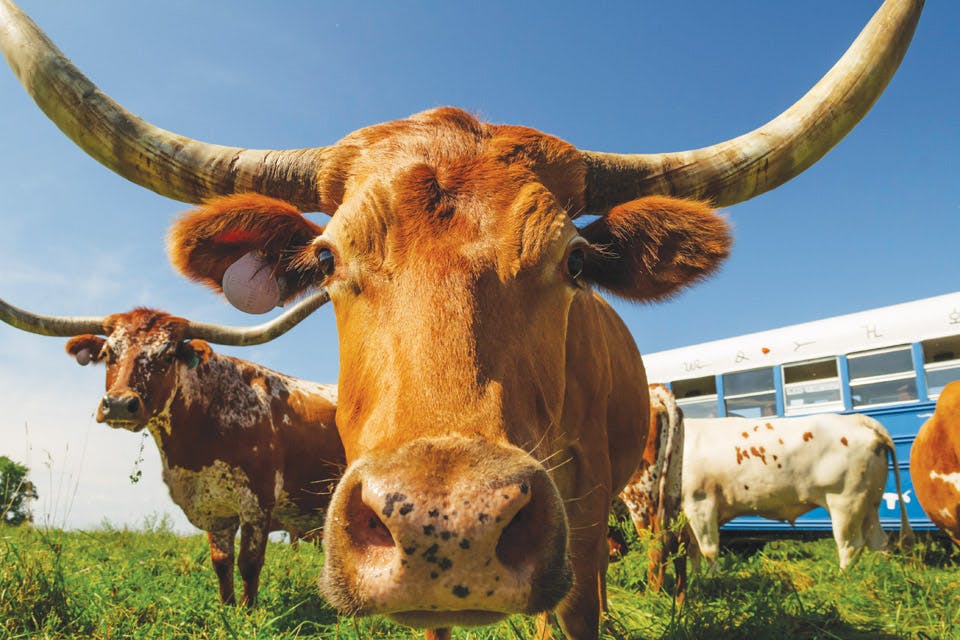 Drivers cruising past the Dickinson Cattle Co. on Interstate 70 get a taste of the Lone Star State in rural Belmont County. More than 400 Texas longhorn cattle, as well as 100 Dutch BueLingo and 15 African Watusi cattle, roam Darol Dickinson’s 5,000-acre ranch.

It’s a sight right out of the American West, which is where Dickinson and his wife, Linda, who own the ranch with their four children, once lived.

“We raised our family in Colorado, and the industry got harder and harder because of the drought,” he says. “In Ohio, it rained and the grass was really good, and we’re getting spring-fed streams going through our pastures. It’s the best ranch country in the United States.”

Dickinson has spent his career breeding for beef high in heart-healthy omega-3 fatty acids, but he’s also working with ranchers across the country to develop cattle herds that take less of a toll on resources. A large percentage of feed consumed by livestock such as cattle, turkeys and chicken are fit for human consumption. Texas longhorns, however, can graze on lower-quality feed with no ill effects.

“Right now, grain is not expensive,” Dickinson explains, “but the day may come when we in this society are like people in some European countries, where we can’t afford to throw grain in a feed bunk.”

All that work comes with a fair amount of play, namely inviting visitors to take a tour of Dickinson Cattle Co.’s pastures to get a closer look at the enormous animals that reside there and learn about the history of the area.

“Johnny Appleseed had his big orchard just a few miles east of the ranch in the late 1700s,” Dickinson says. “On the north side of the ranch is the little house where Hopalong Cassidy was born and raised.”

Guests climb aboard blue school buses to tour the grounds. Although the machines have seen better days, they give the ranch a weathered charm that visitors love, according to Dickinson.

“Our buses are beat up — they’ve got horn holes in them,” he says. “We thought about buying new [ones], but then we found out people like the character of them.”  — Frances Killea