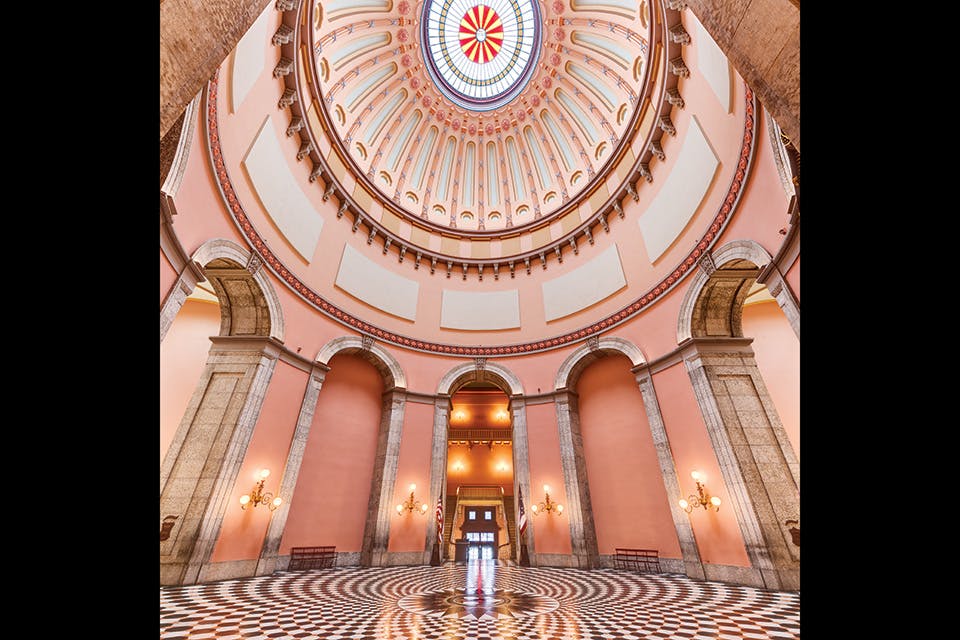 Secrets of the Ohio Statehouse

The seat of our state government is filled with beautiful touches and hidden bits of history that can be discovered by way of daily tours.

An architectural wonder that stands in sharp contrast to Columbus’ urban skyline, the Ohio Statehouse is a bastion of Greek Revival magnificence, representing the ancient origins of democracy in Athens. But the construction project, which officially commenced on July 4, 1839, was fraught with challenges. Five architects haggled over the design. Work ground to a halt when a cholera epidemic spread among prisoners from the Ohio Penitentiary assigned the hard-labor tasks of making bricks and cutting stone, and the legislature’s refusal to supply necessary funding delayed work from 1840 to 1848.

When the Statehouse finally opened in 1861, it was the second-largest public building in the country next to the U.S. Capitol. Housed inside are the House and Senate chambers of the Ohio General Assembly, the office of the governor, the ceremonial offices of the state treasurer and auditor and public hearing rooms. There’s also a treasure trove of objects reflecting Ohio’s place in history, helping attract more than 60,000 tourists a year.

“We go to museums because we get to see objects that are one of a kind, whether that’s a painting or an ancient artifact or a sculpture,” says Dayna Jalkanen, deputy director of museum and education at the Ohio Statehouse. “The great thing about the Statehouse is that it is a unique artifact in and of itself. It’s really a wonderful time capsule into what architecture looked like in the mid-1800s, and our state’s past.”

Presidential Footsteps: Made of 4,957 hand-cut marble tiles that swirl out in a Fibonacci sequence from its circular center, the Statehouse Rotunda floor is a focal point of every tour. “It’s incredible it was created without calculators or computers or any of the modern-day technology we would have,” Jalkanen says. Abraham Lincoln walked across this very floor in 1861 on the way to give one of his early speeches as president-elect. Four years later, more than 50,000 Ohioans filed past the slain leader’s coffin as he lay in state here.

Great State Seals: A stained glass version of the seal from 1924 depicting sunrise over a bale of wheat and a bundle of 17 arrows representing Ohio’s entry into statehood hangs in the Museum Gallery on the ground floor. Painted by Cleveland native Rachel Keebler, the restored skylight in the center of the Rotunda dome depicts the version of the seal that was used until the statehouse was completed. Installed during a renovation project in the mid-1990s, it features a canal boat, a symbol of Ohio’s burgeoning commercial success. “The seal that was used from the 1920s through the 1960s represents the neoclassical design of the times,” Jalkanen says. “It’s only natural that the earlier one would include a canal boat, because it was so important to our business and transportation interests and so innovative at the time.”

Moment of Victory: Commissioned by the Ohio General Assembly in 1857, “Perry’s Victory” commemorates American commander Oliver Hazard Perry’s conquest against the British on Lake Erie during the War of 1812. It took artist William Powell seven years to finish the painting, which measures 18 feet wide by 14 feet high and hangs in the Rotunda. “You can really see the waves, the cannon smoke that shrouded the ships and the wind waving through Perry’s hair,” Jalkanen says. “You really get a sense of what it must have sounded like, felt like and smelled like.”

Love Story: The life-sized bronze statue of William McKinley has kept watch over the Statehouse’s West Plaza since 1906. It commemorates the two years the statesman spent living across the street during his term as our 39th governor. “Each day on his way to work, McKinley would turn and wave to his wife Ida who watched from the window of the Neil House hotel, where they were living,” Jalkanen says. “The wave became so popular that people would line the streets to watch.”