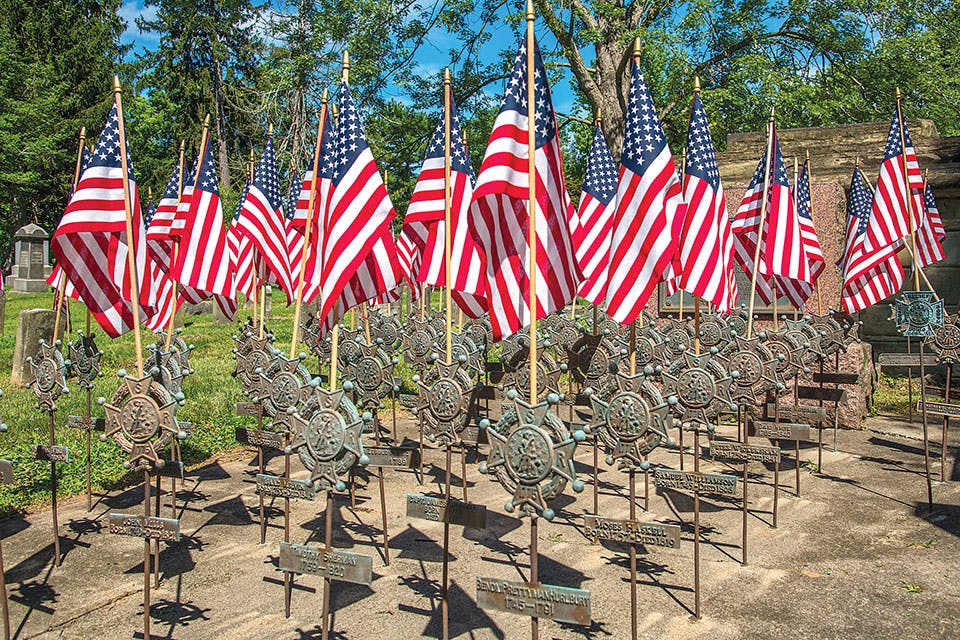 This historic cemetery offers visitors a unique look back through time and insight into the early days of the Northwest Territory’s first permanent settlement.

May 2020
BY Sarah Arnold | Photo by Bruce Wunderlich

May 2020
BY Sarah Arnold | Photo by Bruce Wunderlich

Nestled in the center of a quiet Marietta neighborhood, Mound Cemetery looks much as it did in 1801, when the city’s founders dedicated it. Among the 4,100 graves are 220 documented United States military veterans, including those of 37 Revolutionary War veterans.

“Mound Cemetery provides the final resting place for more officers of the Revolutionary War than any other cemetery in the country,” says Scott Britton, executive director of The Castle, Marietta’s 1855 Gothic Revival mansion museum.

In the final months of the Revolutionary War, compensation for American soldiers was an issue. Ultimately, the government paid the debt with land depending on a soldier’s rank, including tracts in the new Northwest Territory and its first permanent settlement, Marietta.

“With officers receiving more land, and with many of their farms and businesses in New England ruined or bankrupt while they were away, many decided to simply start over [here] on the western frontier,” Britton explains.

Among those interred here are Commodore Abraham Whipple, the first to sink a British ship during the Revolutionary War, as well as Gen. Rufus Putnam, who was instrumental in opening the territory for settlement, which included a stipulation that slavery be forbidden.

The cemetery’s shaded grounds encircle the Great Mound (or Conus), a 30-foot-high rise that has stood for more than 2,000 years. Marietta’s founders had the foresight to preserve the Adena structure by establishing their cemetery around it.

American flags in rows stand inside the cemetery’s Fifth Street gate. The 1927 monument honors veterans of the Revolutionary War who are believed to be buried in Washington County or within the boundaries of the county as it existed at the time of their deaths, but whose final resting place is unmarked or unknown.

“Their deeds are immortalized here among their fellow warriors,” Britton says.