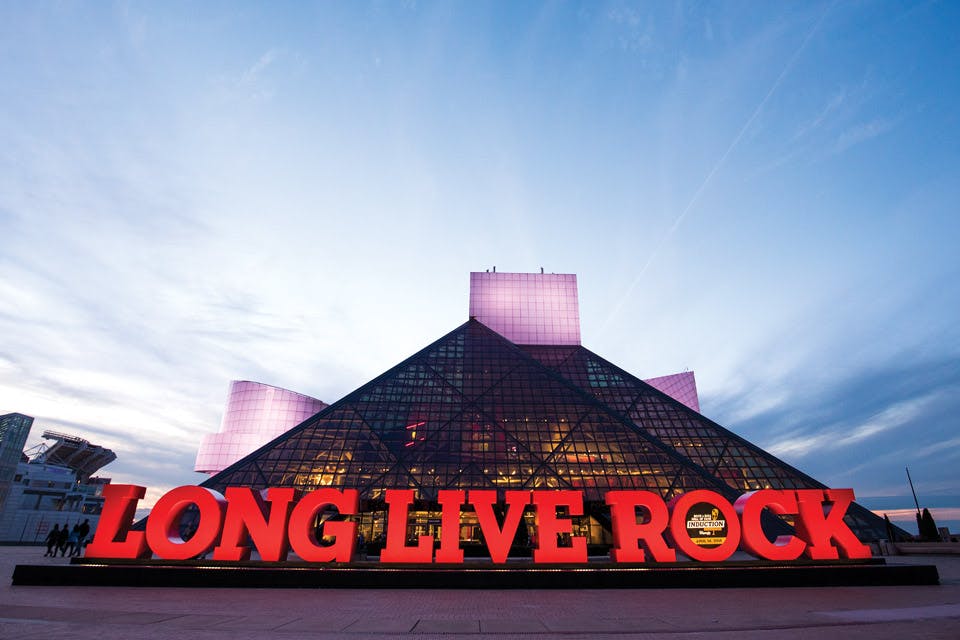 Cleveland’s shrine to the legends of rock ’n’ roll beckons music lovers to commune with the greats who penned the soundtrack of our lives.

Architect I.M. Pei designed the Rock & Roll Hall of Fame to be a place of performance. Those who visit provide movement and color as they ascend the escalators and cross the open balconies of his dream-like design. It’s a building as rowdy and as confident as the art form it celebrates.

Cleveland record store owner Leo Mintz may have been the first to use the words “rock ’n’ roll” to describe music, but Alan Freed was the one who spoke them into a microphone from his WJW radio studio a little over a mile away from where the Rock Hall stands today. There’s an understated bronze plaque by the former station’s front door noting the history contained within. People walk by the sign every day, and one can’t help but wonder how many notice it.

The Rock & Roll Hall of Fame, on the other hand, is impossible to miss, rising up against Lake Erie at the end of East Ninth Street. In front, 12 human-size letters spell out “Long Live Rock.” Inside, visitors take the escalator down to the main exhibition hall. After being led through a “Roots of Rock” and Elvis Presley exhibit, music fans are unleashed to explore the main hall at their own speed and sequence.

“Cities and Sounds” — large cases of artifacts paying tribute to Los Angeles, Detroit, New York, Seattle and more — examines pivotal rock music eras in cities across the United States and in London, from the rise of Motown to the birth of grunge. But the most powerful parts of the main exhibit hall are the spaces dedicated to legendary bands and artists.

It’s not uncommon to see a group of visitors camped out around the television screens that tell the behind-the-scenes stories of each of the Beatles’ albums. From there, fans can get a close-up look at the acoustic guitar John Lennon used both in the 1965 Beatles film “Help!” and during his and wife Yoko Ono’s bed-ins for peace in March and May of 1969. During the second bed-in, Lennon recorded “Give Peace a Chance” on the instrument and inscribed it with caricatures of Ono and himself that remain to this day.

Such discoveries are frequent while making a trip through the Rock Hall, giving fans that riveting feeling of connecting to the people and moments behind the songs and albums that shaped their lives. The whole place is a celebration, but nowhere is that more apparent than the “Power of Rock Experience,” which distills incredible moments from years’ worth of Rock & Roll Hall of Fame Induction Ceremony performances into a captivating 12-minute montage.

Waiting outside the Connor Theater on the museum’s open third level, visitors get the feeling they’re waiting on the wings of a rock-concert stage. Once inside the theater, the immersive show fills your entire field of vision as it seamlessly flows through decades of performances: Chuck Berry, Metallica, Debbie Harry, Joan Jett, Bruce Springsteen, Stevie Wonder, U2.

Directed by Jonathan Demme, the film ends with the most famous moment of any Rock Hall induction: Prince’s finale to “While My Guitar Gently Weeps” the night George Harrison was enshrined as a solo artist. George’s son, Dhani, strums in the background and Tom Petty plays to Prince’s right as the man who gave us “Purple Rain” revels in a searing guitar solo that seems to come from another place.