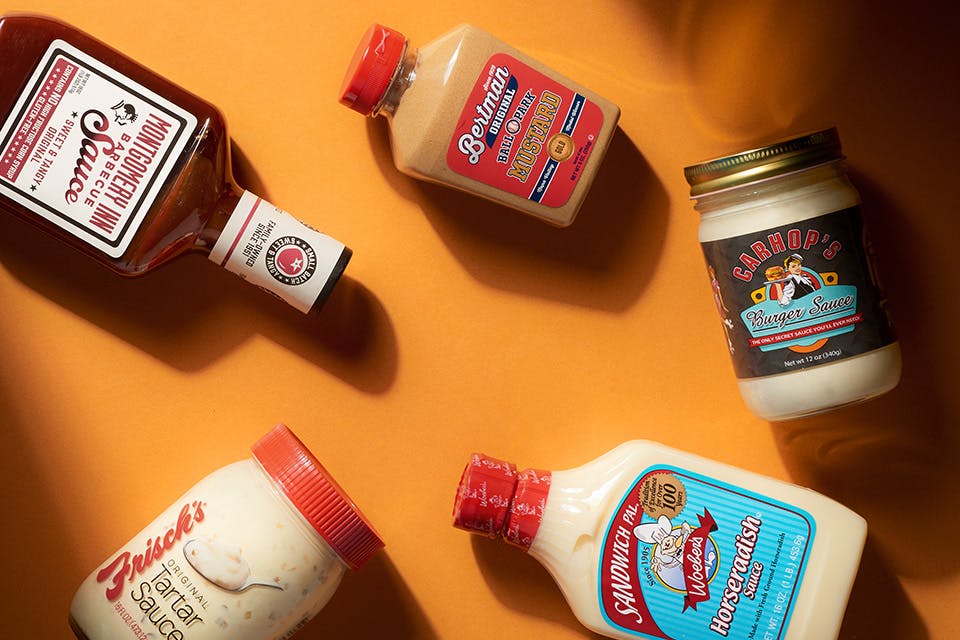 Flavors of the ballpark and the classic drive-in are among this lineup of sandwich toppers.

Montgomery Inn Barbecue Sauce | Cincinnati
Montgomery Inn founder Ted Gregory was known as the Ribs King, serving diners at his original restaurant in the small village of Montgomery beginning in 1951. Gregory’s wife, Matula, came up with the formula for the spot’s beloved barbecue sauce. Available at Montgomery Inn’s two locations, at markets across Ohio and online. montgomeryinn.com

Bertman Original Ball Park Mustard | Cleveland
The official mustard of the Cleveland Indians, this condiment has been a staple at baseball games in the city for generations. Joseph Bertman unveiled his spicy brown mustard in the 1920s. Today, Bertman’s also makes horseradish and a Dortmunder Beer Mustard with Great Lakes Brewing Co. Available at markets across Ohio and online. bertmanballparkmustard.com

Carhop’s Burger Sauce | Willowick
If you want to bring home the flavor of a 1950s drive-in, pick up a bottle of Gina Giallombardo and Annette Restifo’s burger topper. Debuting in 2011, this secret sauce has since been joined by a spicy Nitro variation as well as a Smokehouse sandwich spread described as “bacon in a jar.” Available at select northeast Ohio markets. carhopsburgersauce.com

Woeber’s Horseradish Sauce | Springfield
This company traces its start back to 1905 when Carl Woeber arrived from Germany with a handful of family mustard recipes. Today, Woeber Mustard Co. makes a variety of condiment brands, including Mister Mustard and Woeber’s Sandwich Pals, which includes the company’s signature horseradish. Available at markets across Ohio and online. woebermustard.com

Frisch’s Tartar Sauce | Cincinnati
Samuel Frisch opened his namesake cafe in 1905, but a 1946 meeting between Dave Frisch and Bob Wian, creator of a double-decker hamburger called the Big Boy, changed the course of the business. Frisch struck a deal to adopt the burger on his menu but dress it with a special tartar sauce unique to Frisch’s chain. Available at Frisch’s Big Boy restaurants and online. frischs.com