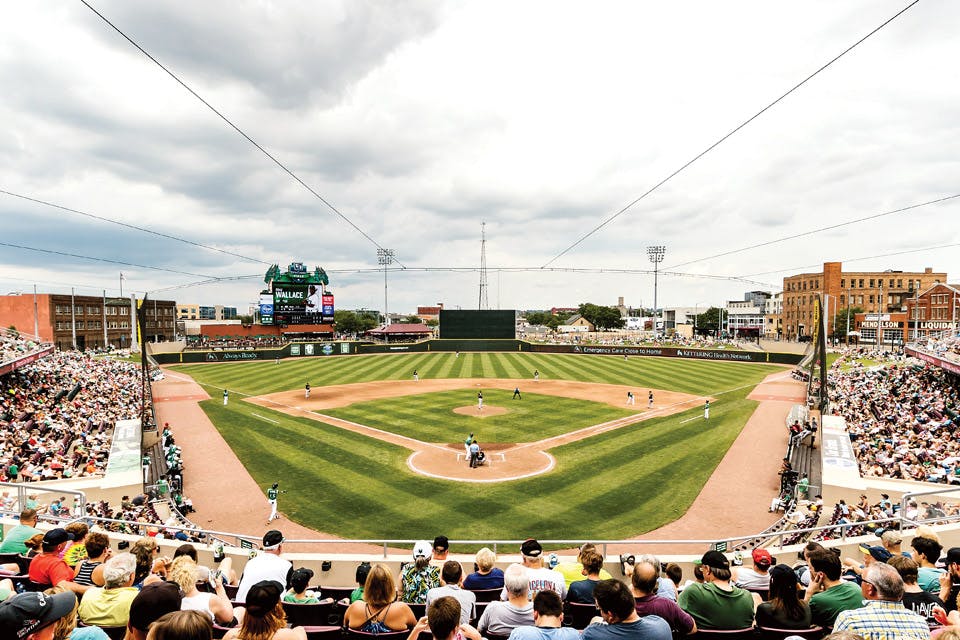 From the Dayton Dragons to the Columbus Clippers, these teams offer plenty of fun alongside America’s pastime.

Baseball means summer and summer means baseball. But it’s not just all about the big leagues. Fans can also hit the road to see one (or all) of the Buckeye State’s Minor League Baseball teams. Because they are affiliated with Major League clubs, these teams don’t have a say on who ends up on their rosters. So, the front-office strategy is to create lots of fun, from giveaways to delicious deals to play areas for the smallest sluggers.

1. Dayton Dragons: The Single-A affiliate of the Cincinnati Reds opens 2019 with a consecutive sell-out streak that dates back to April 2000. Fifth Third Field has 7,000 seats, and three lawn areas that hold another 1,000 spectators once a game is sold out. The ballpark boasts four private-party decks and there's even a pair of dragon heads flanking the scoreboard. “There’s a smoke effect that comes out of the nostrils,” says Eric Deutsch, the team’s executive vice president, “and we have its eyes light up red during home-run celebrations.” 220 N. Patterson Blvd., Dayton 45402, 937/228-2287, daytondragons.com

2. Toledo Mud Hens: Since 2002, this Detroit Tigers Triple-A affiliate has played at Fifth Third Field in the city’s Warehouse District. And, thanks to the opening of the Hensville entertainment district in 2016, there’s a lot to do nearby, from hitting Fleetwood’s Tap Room for drinks and food to picking up Mud Hens gear at the Swamp Shop. All weekend matchups include postgame fireworks beginning in May, and Hensville Park hosts events like Paws and Pints on May 31, where fans can bring their dog and enjoy a pregame beer. 406 Washington St., Toledo 43604, 419/725-4367, mudhens.com

3. Lake County Captains: Since 2003, the Cleveland Indians Single-A affiliate Lake County Captains have played about 15 minutes east of the Tribe’s downtown ballpark. Classic Park has two large tented picnic areas, a kids zone with games and enticing promotions to help bring fans in the door. There’s an annual night dedicated to Cleveland sports history with appearances by notable names from the city’s sports past. One of the most popular giveaways was a replica statue of the good-luck charm Jobu from the 1989 movie “Major League.” 35300 Vine St., Eastlake 44095, 440/954-9467, captainsbaseball.com

4. Mahoning Valley Scrappers: Fans of this Cleveland Indians Single-A affiliate have been coming to Eastwood Field since 1999. Located next to Eastwood Mall, fans can enjoy some pregame shopping or a picnic in the gardens by the field. Promotions include bobblehead nights (Warren native and Foo Fighters frontman Dave Grohl was honored with one in 2016), lots of in-game giveaways and a kids zone with bounce houses, prize wheels and more. “There’s really something for everyone, whether you’re a baseball fan or not,” says Jordan Taylor, the team’s general manager. 111 Eastwood Mall Blvd., Niles 44446, 330/505-0000, mvscrappers.com

5. Akron RubberDucks: The Akron RubberDucks began in 1997 as the Akron Aeros before the Double-A Cleveland Indians affiliate embraced a name change in 2014. Every Friday-night matchup during the season is followed by postgame fireworks, and the team’s lineup of 2019 promotions includes Quack to the Future night (actor Donald Fullilove, who portrayed Mayor Goldie Wilson in the 1985 movie “Back to the Future” will throw out the first pitch). The ballpark also has a kids zone with games, a Tiki Terrace bar for adults and a picnic area known as Fowl Territory. 300 S. Main St., Akron 44308, 330/253-5151, akronrubberducks.com

6. Columbus Clippers: The Columbus Clippers’ Dime-A-Dog nights may be one of the best deals in Minor League Baseball, offering fans the chance to periodically enjoy 10-cent hot dogs. The Triple-A affiliate of the Cleveland Indians is also a place to see future Tribe stars just before they’re called up. (In the past, fans have had the chance to see the likes of Francisco Lindor and Corey Kluber). The Clippers’ home of Huntington Park is located in Columbus’ Arena District and has the capacity to hold more than 10,000 fans. 330 Huntington Park Ln., Columbus 43215, 614/462-5250, clippersbaseball.com