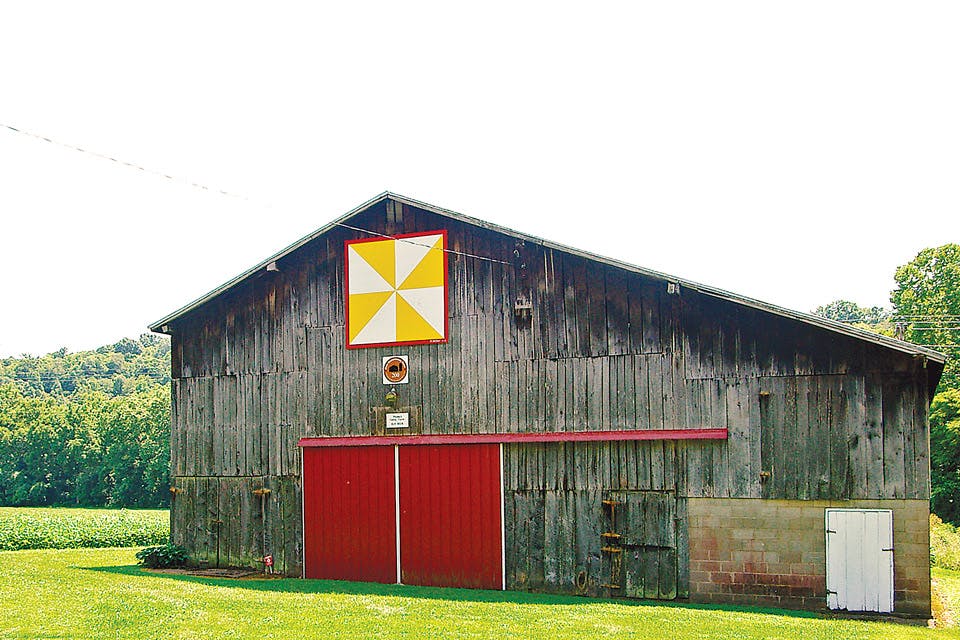 What started as a way for Adams County resident Donna Sue Groves to honor her mother — master quilter Nina Maxine Groves — has blossomed into the Appalachian Discovery Quilt Barn Trail. Launched in Adams County in 2001, the art project, which locals call “the clothesline of quilts,” features colorful renditions of popular patterns painted on 20 barns. Each offers a slice of history along with beautiful views as travelers cross the Adams County countryside.

“The driving tour has put us on the map in an artistic way,” says Adams County historian Elaine Lafferty, who selected the Shoo Fly design for her barn in West Union, which has been in her family since 1921. “People who love needle arts can drive from place to place and see these patterns in a totally new way.”

Over the past decade, other Ohio counties and states have followed suit, picking up paintbrushes to celebrate the stitchery that spans generations. Here’s a sampler of a handful of the designs featured on the Adams County driving tour.

1. Hourglass: Also known as the Bow Tie, the Hourglass is a beginner patchwork pattern that uses quarter-square triangles to make blocks resembling an hourglass. It usually stood for morning, midday, evening, night and time well spent. Some historians believe the symbol also served as a warning sign for slaves that it would be necessary for them to travel in disguise or change into clothing resembling garments worn by a person of higher status. 32901 St. Rte. 41, Peebles 45660

2. Shoo Fly: Named after a wild plant with domed flowers, this pattern from around 1850 became a popular design to symbolize agriculture. Lafferty chose it to decorate her family’s barn because she associates the name with a childhood trip to Pennsylvania and a dessert she’ll never forget. “It’s a lot like mincemeat,” she says. “But the name really stuck with me since I never heard it before.” 9299 St. Rte. 247, West Union 45693

3. Friendship Star: The quilts pioneers brought with them were a comfort to the women who left their home, family and friends behind in the East for the uncertainty that faced them as they headed West. The quilts were often given to friends as a going-away gift. Once settled in their new surroundings, women displayed the treasured needlework to keep the memory of loved ones alive and provide comfort during hard times. The design’s popularity through the years can also be attributed to its simplicity in construction. 1092 Vaughn Ridge Rd., West Union 45693

4. Windmill: Wheels were vital to the lives of 19th-century homesteaders. The pioneers depended on them for transportation across the plains, and they were an integral part of sawmills and gristmills where grain was ground into flour or meal. In the early 1900s, windmills also pumped water for livestock. Because of its importance in daily life, the wheel was often a favorite quilt pattern. One of the oldest four-patch patterns, light and dark triangles are used to achieve the windmill effect. “This is a fitting tribute to the agriculture that continues to affect our lives,” says Lafferty. “When I see these colors, I think of grain.” 1510 Beasley Fork Rd., West Union 45693

5. Sawtooth Star: One of the oldest patchwork patterns, this star was often quilted by abolitionists as a symbol meant to guide fugitive slaves to safety. Quilters often used the large center square as a place to embroider their signatures. “Until they got to the Ohio River, the slaves feared for their lives,” says Lafferty. “Imagine what it meant to them if they did see a quilt with this pattern hanging over a fence or spread out on the ground or visible from a window. It gave them hope.” 13441 U.S. Rte. 52, Manchester 45144