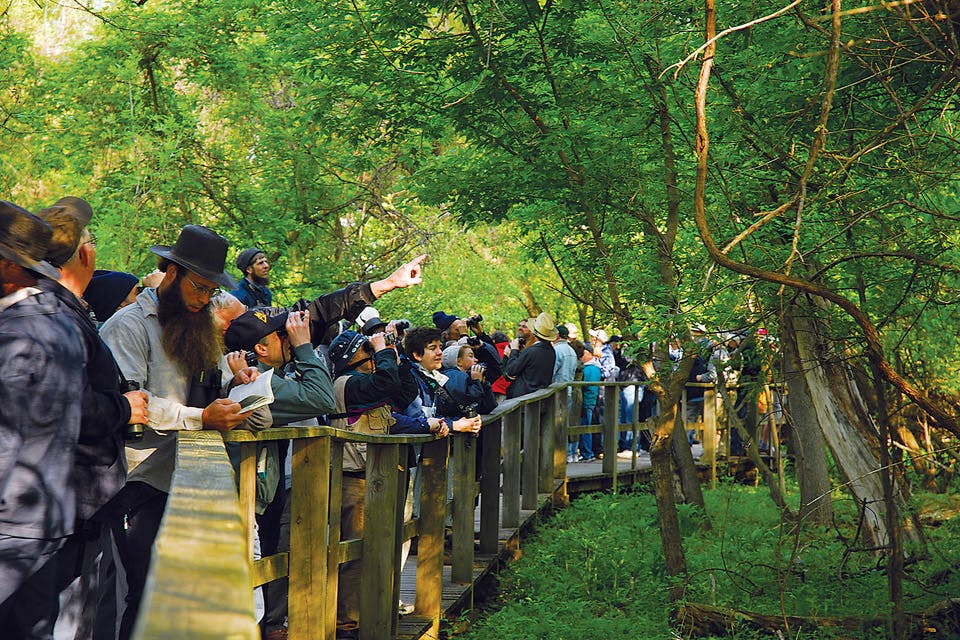 This spot along the Lake Erie shore is considered one of the world’s best bird-watching sites. Visit and it won’t take long to see why.

We expected a quiet spring afternoon, hoping to see some turtles, an eagle or maybe a deer. Instead, as my parents and I stood on the boardwalk at Magee Marsh Wildlife Area near Oak Harbor, we were surrounded by people carrying binoculars and others holding the biggest camera lenses I had ever seen.

“Look! It’s a warbler,” a man said, identifying it by a name I have long since forgotten.

“Was it a male or a female?” someone else asked.

My parents and I looked at one other in bewilderment. I had heard that people went birding here, but I had no idea it was this big. It was a little intimidating, yet part of me wished I had binoculars so that I could see what was so fascinating.

The following spring, I was on the boardwalk again, this time as a reporter for the local newspaper and hoping to interview birders for a story. A man beckoned me over to him.

“Want to see a screech owl?” he asked.

In the crook of a tree was a reddish mass I recognized as a sleepy little owl, its eyes slightly opening and closing now and then. If it weren’t for this man who generously pointed it out, I never would have seen it. I wanted to see what other adorable birds I was missing because I hadn’t been looking.

On another trip to the boardwalk, a brilliant yellow bird flew past me and landed in a tree just a few feet away. As I watched, afraid that I might startle it, I saw that it could have fit in my hand and was marked with red streaks. I later learned it was the aptly named yellow warbler.

I finally understood that I was seeing something truly special. These warblers are from tropical places, and most only stop by for a few weeks in the spring and fall to rest and eat before continuing on their journey. They are at their brightest and most beautiful in their spring breeding plumage when they are here, in Ohio, in my backyard, where you might least expect to see something like them. I have yet to find a place where you can see them as closely as the Magee Marsh boardwalk.

That’s why it’s considered one of the best places in the world for birding. One of the guides who led a walk I took there during the Biggest Week in American Birding, a festival of birding events during peak migration, described it as “magical.”

Each time I go there and see these birds — from the exotic-looking Blackburnian warbler with its bright orange head and black, white and yellow markings to the colorful green herons that nest here — I am reminded that he was right.

Over the years, I’ve birded many of the Lake Erie marshes with my parents and friends. Birding made me see my favorite nature spots in a new way. This year, I’ll be back on the Magee Marsh boardwalk and at other spots around Lake Erie.

To read the rest of our “40 Things Every Ohioan Must Do” feature from our April 2018 40th anniversary issue, click here.