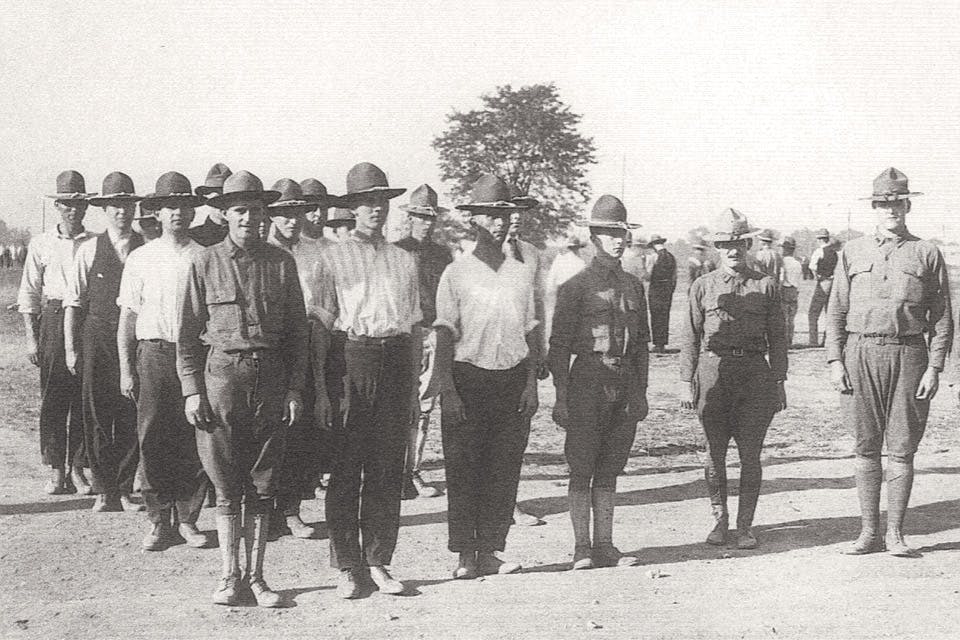 Thousands of soldiers trained in Ross County before shipping out to World War I battlefields. July’s Camp Sherman Days honors their contributions.

The fresh-faced recruits in the vintage photo present an amalgam of emotion as they report for duty. Some proffer a shy grin to the camera, while others somberly stare straight ahead. But despite their varied expressions, it’s clear there’s a common bond: Each worries about what his future holds.

From September 1917 to December 1918, more than 40,000 soldiers from Ohio, Kentucky, West Virginia, Indiana and Pennsylvania trained at the Camp Sherman army base in Chillicothe before heading to World War I battlefields in France and Italy.

July 1 through 9, Chillicothe will commemorate the centennial of the historic site by hosting Camp Sherman Days throughout the city. The slate of events includes photo displays, a vaudeville performance, a parade capped off by fireworks and driving and docent-led walking tours of the campgrounds.

“We pulled the best and brightest of our young men to answer the call to defend their country, and they prepared right here,” says Chillicothe historian Richard Rutherford, a member of the Camp Sherman Days committee. “Even though the physical remnants of the camp are gone, the history remains.” 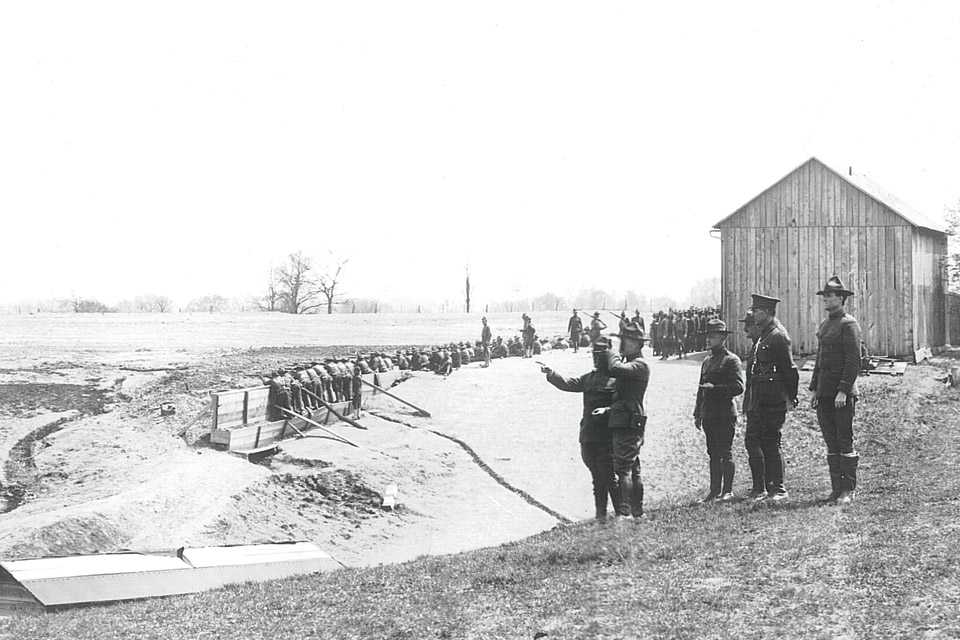 Named after celebrated Civil War Union Army Gen. William Tecumseh Sherman, the camp was divided into four zones: a rifle range (above), an artillery range, the maneuver grounds and the main camp site.

After Congress formally declared war on Germany in April 1917, rapid mobilization commenced to prepare American infantry for battle. Secretary of War Newton D. Baker ordered the construction of 16 cantonments around the country to house soldiers and supplies. Since Chillicothe had served as the site for previous military facilities, including Camp Logan during the Civil War and Camp Bull during the War of 1812, it was, explains Rutherford, the obvious choice for another encampment.

“During the days of the Ohio & Erie Canal, Chillicothe was a center of business and industry, and the railroad lines were still here, so materials and draftees could easily be transported here,” Rutherford says. “The city also sits on top of a major aquifer, so water would be readily available. We had all the makings of a right place.”

Named after Lancaster, Ohio, native and celebrated Civil War Union Army Gen. William Tecumseh Sherman, the 9,000-plus-acre camp was divided into four zones: a rifle range, located at the base of Mount Logan; an artillery range, now part of the Scioto Trail State Forest; the maneuver grounds, used for honing gas warfare defense and trench-digging techniques; and the main camp site, which quickly became a favorite gathering place for the men.

In addition to laundry facilities, barracks, mess halls and a 2,000-bed hospital, the main site also included 11 YMCA buildings where the men could play basketball, read and write letters home, listen to records on the Victrola and watch a movie or live vaudeville show.

The Red Cross Community House accommodated friends and relatives who came to the camp to visit, and the 40,000-volume library was filled with best-sellers as well as newspapers from soldiers’ hometowns. 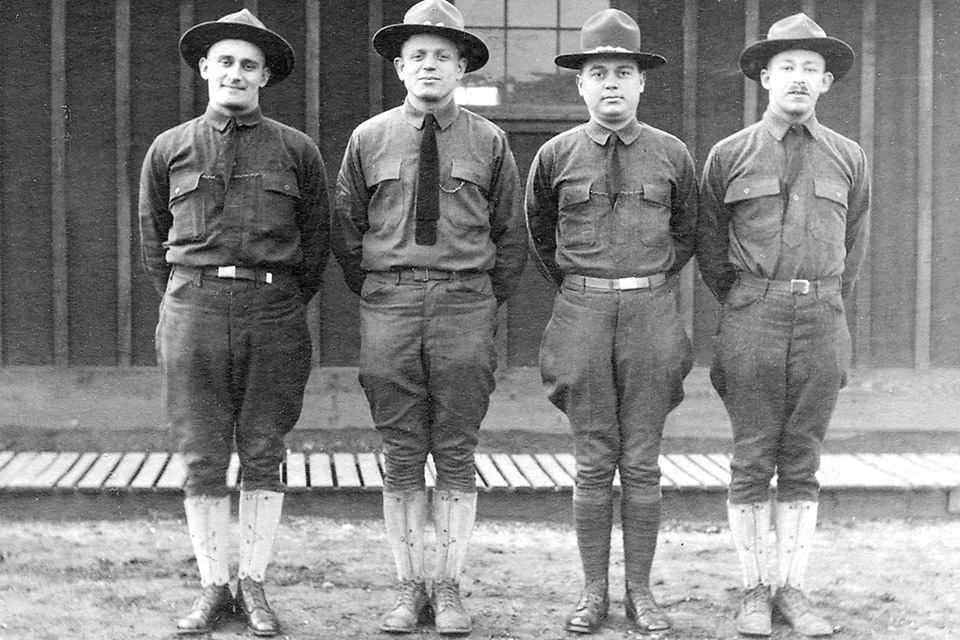 From September 1917 to December 1918, more than 40,000 soldiers from Ohio, Kentucky, West Virginia, Indiana and Pennsylvania trained at Camp Sherman in Chillicothe.

“Imagine being a young man living in farm country, getting your draft notice and being told to pack a small suitcase with enough clothing for just a couple of days,” Rutherford says. “You catch the train and finally see this huge place with tall buildings. You wonder, Oh my god, where am I going? Will I get lost? Will I get into trouble? All kinds of thoughts are going through your mind. And it’s not just you. It’s also the 500 or 600 guys who came on the train with you.”

In a commemorative history of the site published during World War I, Camp Sherman: Hold ’Em Boys! We’ll be There! author Frank H. Ward described the camaraderie that emerged and then solidified as the training, which began with one hour of marching per day, grew more strenuous.

“As the men became … more accustomed to the camp life, the marching and physical exercises were increased and the general work of the camp became more strenuous,” Ward wrote in his book. “ … There is no social distinction in the ‘Y’ huts. The olive drab has wiped away all that. No one would think of preaching universal brotherhood at Camp Sherman, where Catholic and Protestant, Jew and Gentile and Greek are working and fraternizing together. Brotherhood is a self-evident reality. It is no longer a subject for propaganda — it is accomplished.”

Recruits found numerous ways to while away their free time, including engaging in spirited games of football. The sport quickly became a favorite activity — so much so that on Nov. 29, 1917, the Camp Sherman Stars played The Ohio State University in a Thanksgiving contest that pitted the military squad against notable Buckeyes, including All-American running back Charles “Chic” Harley. Even though the Camp Sherman team boasted talent from the collegiate ranks, it was no match for the Buckeyes, who won 28-0.

As the war raged in Europe, America was fighting a devastating battle of its own. The Spanish Influenza Pandemic of 1918 would take the lives of 43,000 U.S. servicemen, and those at Camp Sherman were not immune to its devastating effects.

“About 6,000 soldiers stationed at Camp Sherman caught the flu,” says Bob Leach, senior vice commander of VFW Post 108 in Chillicothe and a retired lieutenant colonel who spent 22 years in the military. “Of that number, 1,177 soldiers died there — the same number of men who perished aboard the USS Arizona following Japan’s attack on Pearl Harbor on Dec. 7, 1941. That number is a tragic irony.”

The end of the war in 1918 meant the end of military cantonments throughout the country, including Camp Sherman. During the 1920s, the United States government closed the camp and dismantled it. Today, only a portion of the building that housed the library remains. But, Chillicothe native John R. Doerres says the memories burn brightly. His father Ralph was a sergeant first class stationed there,

“You can almost still see the footprints in the sand,” says Doerres, who serves on the Camp Sherman Days committee. “World War I brought the advent of chemical warfare, which was unlike anything we had ever seen before. Our way of life was changing, and the men who served here did so with honor and distinction. They deserve our thanks.”

For more information about the camp and events scheduled in Chillicothe July 1 through 9, visit campshermandays.com.