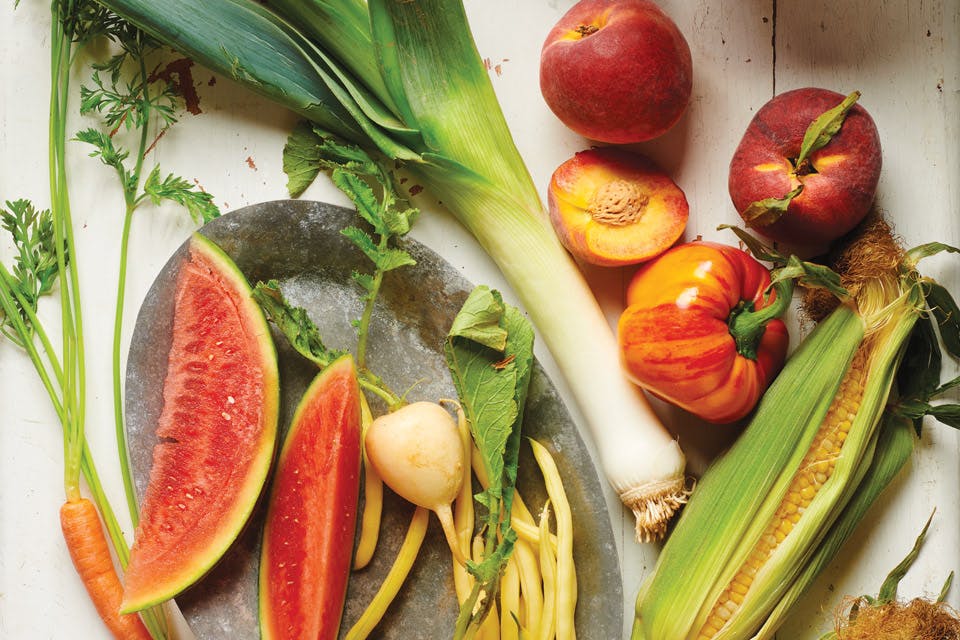 Cucumbers: Often dismissed as a condiment, a side dish or a vehicle for another dish, cucumbers have star potential, and Cara Mangini, cookbook author and chef and owner of Little Eater restaurant in Columbus, is an unwavering fan. “I like to really take advantage of their crispy, crunchy quality, and highlight them in that way,” she says. “I like to put the cucumbers front and center, and pair them with a basil pesto and goat cheese and arugula and smashed avocado on ciabatta.” In peak season, there are lots of surprising varieties — from bright, round lemon cucumbers to thin-skinned Japanese and Persian types

Peaches: Paige Beal, head chef at Harvest Moon Craft Kitchen in Canal Winchester, is a fan of peaches because their tempered flavor makes them versatile. “Peaches have a taste that’s not exactly neutral, but their sweetness is not overpowering,” she says. Beal roasts the fruit to make roasted peach and caramelized onion vinaigrette. It goes well with the restaurant’s salmon salad, which uses spring mix, cabbage and fennel. A quick way to enjoy peaches is to throw them on the grill, which caramelizes the sugars. “Make sure the grill is oiled, and give them a few minutes on each side till they’re nice and soft,” Beal says.

Peppers: Although they come in a rainbow of colors, Beal favors red and green bell peppers, because they’re familiar to most people, and she often uses them in the same dish: “Since the red are sweeter and the green have more of a pepper flavor, the two together have a nice balance,” she says. “Also it’s a nice mix of colors. Beal recommends making a pepper relish. “Put chunks of red and green peppers, onion and garlic in a food processor with a little chicken or vegetable stock to thin it out a bit and make it lighter,” she says. “It goes great with bread or on a burger with pepper jack cheese.”

Carrots: A lunchbox favorite, carrots are great both raw and cooked. Mangini loves making a Turkish-inspired dip with shredded carrots sauteed in olive oil with garlic and pine nuts stirred into yogurt to serve with crudités or pita, and she never lets the greens go to waste. “You want to make sure that you’re separating the greens from the roots and treating them almost like they’re two separate vegetables,” she says. Mangini suggests using them in pesto or chimichurri, or even as an herb. “Anything we do with making a carrot salad,” she adds, “we would go ahead and toss the greens in as well for the texture and color and another flavor profile.”

Sweet Corn: “You can’t help but just appreciate that moment of the year when Ohio sweet corn comes into season,” says Mangini. “There really isn’t anything like that first ear, or first 10 ears. Ultimately, in my mind, there’s really nothing like that, just enjoying fresh corn off the cob with a little bit of butter and salt.” Even so, chefs find ways to play with fresh Ohio corn. “I wanted to create a recipe that really celebrates this ingredient in a different way,” says Mangini, describing her corn fritters. Cooked with shallots and garlic and served warm, they’re every bit as likely to inspire seconds as the first grilled ear of the season.

Leafy Lettuce: When choosing the type of Ohio greens you want to work with, Beal recommends considering three things: texture, taste and the color it adds. “Romaine is a good choice for a burger, since it has a neutral flavor and gives a bit of a crunch,” she says. “And you can make the pieces smaller so it fits perfectly on the bun.” Most of the salads at Harvest Moon Craft Kitchen feature spring mix, an assortment of very young leaves and shoots also known as field greens or mesclun. “It’s light and doesn’t really have an overbearing taste,” Beal says, “allowing the other ingredients to shine.” 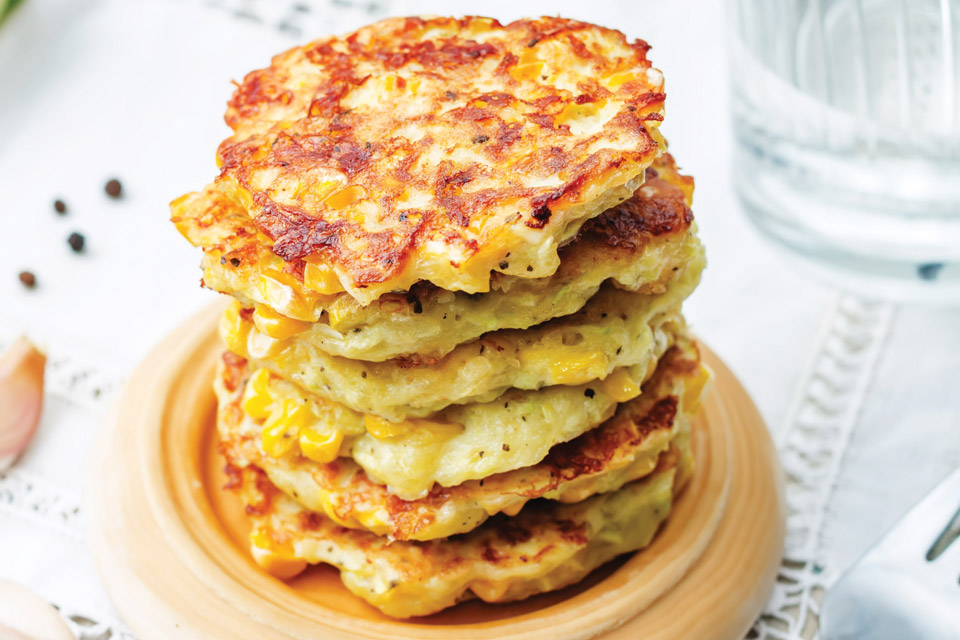 DIRECTIONS
Combine the fresh corn kernels, minced garlic, shallots, eggs, salt and pepper in a medium-size bowl. Stir well to incorporate the eggs, then stir in the flour until fully incorporated. The batter will be firm enough to hold together but loose enough to spread slightly in the pan.

Place several paper towels on top of a wire cooling rack. Heat the canola in a large skillet over medium-high heat until it begins to shimmer, then reduce the heat to medium.

Working in batches, use a large spoon to fill a 1⁄3 cup measure with the batter and then use a spoon to help release the batter directly into the oil, being careful not to overcrowd the pan. Fry the corn fritters until they are golden brown and crispy, 2 to 2 1⁄2 minutes on each side. Transfer the fritters to the prepared cooling rack and sprinkle them lightly with salt. Reduce the heat to low between batches and remove any stray corn kernels left in the oil. Bring the heat back up to medium and continue to fry another round of fritters. Reduce the heat again if the fritters brown too quickly at any time or if the corn starts to pop. The fritters are best straight out of the pan, but you can make them ahead and store them in a single layer on a baking sheet for up to 2 hours. (Reheat them at 425 F until warmed through and crispy, about 6 minutes.) Serve the fritters immediately.

Chef’s Note: Be very careful when making fritters: the corn kernels will pop and splatter oil if the oil gets too hot. Make sure to reduce the heat as needed. Or if you want to avoid the risk completely, cook the fritters over low heat for 6 to 8 minutes on each side. (They will not be as crispy.)

Serving Suggestion: Try with just a dollop of whole-milk ricotta cheese or a smear of goat cheese. Or, serve with a salad of halved cherry tomatoes and chopped fresh basil tossed with olive oil, balsamic reduction (recipe below), salt and pepper.

DIRECTIONS
Place the vinegar in a small, heavy saucepan and bring to a boil over medium-high heat. Reduce the heat to low and gently simmer until the vinegar reduces to about one-quarter of its original volume (about 20 minutes). Check the consistency: It should be syrupy and coat the back of a spoon. Simmer slightly longer if needed.