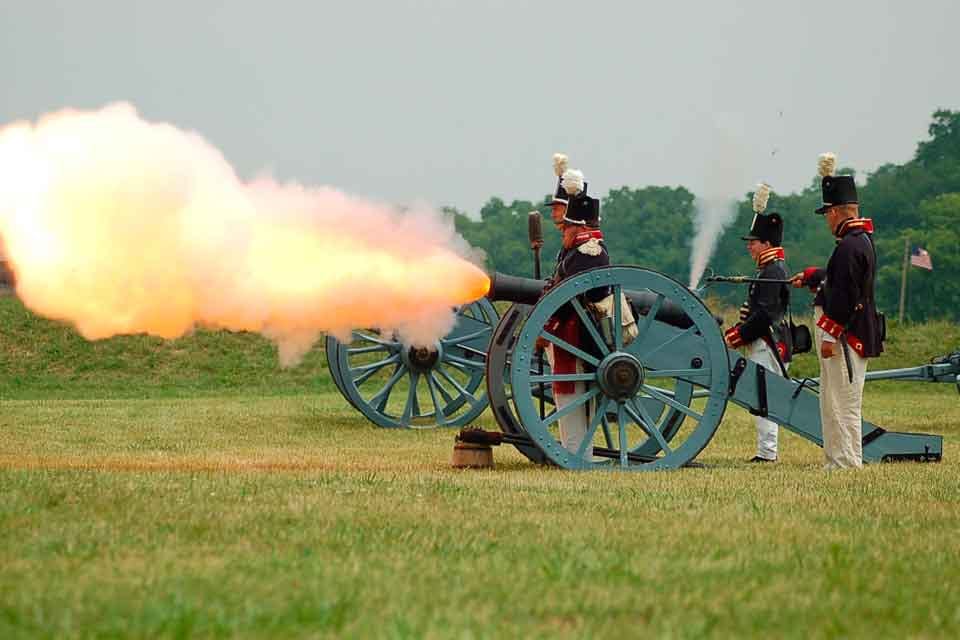 Learn about those who fought for our nation’s independence at Fort Meigs, unearth ancient treasures at The Oleander Park System in Sylvania and more.

Fort Meigs
Kids learn about those who fought for our nation’s independence at this rebuilt War of 1812 fort.

Kids are all about forts — ones built with blankets and couch cushions, mostly. But thanks to a recent addition to Perrysburg’s Fort Meigs visitors center, children can now don re-creations of period military uniforms and dresses to get a feel for what life was like for those who lived during the War of 1812 era.

There’s also a playroom that allows kids to assume a character from the 1800s and have fun while they learn. “We have toy muskets, and there is also a big tabletop version of Operation,” says program manager Dan Woodward. “Basically, you get to be an 1812 surgeon.”

Sandwiched between the American Revolution and the Civil War, the War of 1812 pitted British forces against the new United States but has largely become one of America’s forgotten wars. Woodward says the two-and-a-half year conflict gave us some of our earliest national heroes and also our national anthem.

“We are telling the story of the men who fought and died here over 200 years ago,” he says. “If people can take away just a little bit of an understanding of what took place here, then we have done our jobs properly.”

Aug. 19 and 20 brings the inaugural Revolution on the Ohio Frontier event to the reconstructed fort. Kids of all ages are welcome to experience a battle re-enactment and then venture into the soldiers camp to chat about army life during the era.

The evolution of trades on the Ohio frontier is also part of the event, with a blacksmith, leatherworker and candle-maker demonstrating their craft. “It’s not just a focus on the American Revolution,” Woodward adds, “but also on the revolution of technology.” Visit website for admission and hours; 29100 W. River Rd., Perrysburg 43551, 419/874-4121, fortmeigs.org

Ohio’s Friendliest Train Robbery
Introduce your little ones to the Wild West days of outlaw Jesse James, but with a lot more manners. Three times each summer, the Hocking Valley Scenic Railroad stages Ohio’s Friendliest Train Robbery. “When the people show up at our depot to pick up their tickets, they are given a little play money and they board the train,” explains Hocking Valley Scenic Railroad trustee Bob Lennertz. You can guess what happens next. As the train passes through an open meadow, cowboys on horseback stop the train, board it and begin collecting the play money from those riding. “A lot of the riders we get, especially the kids, they have never seen a train up close,” Lennertz adds, “so its quite a kick for them.” Adults $21, seniors (60+) $19, children $17; visit website for dates; 33 E. Canal St., Nelsonville 45764, 740/249-1452, hvsry.org

Historic Roscoe Village
From dipping candles to making rope, Historic Roscoe Village gives children a chance to experience what life was like in this former 1830s canal town. “If people are told information, they only remember about 10 percent of what they hear,” says Stacie Stein, education manager for the village. “If you are actually doing something, that experience stays with you so much longer.” Living history artisans provide a better understanding of once commonplace activities like blacksmithing, broom- making and weaving textiles. “Those crafts and seeing how something is done really grabs their attention and they talk in a way that the children understand what is going on,” Stein says. Visit website for admission and hours; 600 N. Whitewoman St., Coshocton 43812, 740/622-7644, roscoevillage.com

Royalty on the Rails & Superhero Train
Trains already capture kids’ attention. Now, couple that with a journey geared toward your little ones’ interests, and riding the rails just got a lot more interesting. The Cuyahoga Valley Scenic Railroad, which travels through Cuyahoga Valley National Park, offers separate superhero- and princess-themed excursions that last 90 minutes and include a singalong, trivia and snacks. “We wanted to have an event where kids could come out that would be a little shorter than our regular scenic rides,” says Cuyahoga Valley Scenic Railroad programs manager Daniel Napolitano. Visit website for dates; $30 (ages 3 and up require ticket); 1630 Mill St. W., Peninsula 44264, 330/439-5708, cvsr.com

Fossil Park
Visit The Olander Park System in Sylvania to let the little ones dig for prehistoric treasures in a fun and safe environment.

Budding archaeologists can dig in at this former quarry that has been re-created as a safe place for little ones to scour for prehistoric fossils. Visitors have long explored the quarries in the area, which are still operational, but a change in ownership and safety issues brought an end to the tradition in the late ’90s.

“They were concerned about security and closed the quarries to public access,” explains Erika Buri, executive director of The Olander Park System in Sylvania where Fossil Park is located. “One of the ways to mitigate that was [to open] this park.”

Today, a fresh supply of fossil-rich shale from nearby quarries is trucked in and dumped at the park, and thanks to the rock’s soft nature, no special tools are needed as kids sift through it searching for fossils.

“We don’t permit metal tools and that is for safety purposes,” Buri adds. “A lot of the shale has been broken down pretty significantly and isn’t even embedded in the rocks.”

She says the most common fossils found at the park are brachiopods — bottom-dwelling bivalves that originated during the Devonian period roughly 365 million years ago when an ancient ocean covered where North America is today. Fossils of horn coral, crinoids and pieces of trilobites are also discovered at the park from time to time.

“There are a lot of small [fossils] — we’re talking quarter-sized,” Buri adds.

After a day’s dig in the park, visitors can take the Quarry Ridge Bike Trail to a nearby soccer complex and spring-fed swimming quarry. But with a depth of 22 feet, it is only recommended for experienced and competent swimmers and may not be appropriate for all children. Free; visit website for hours; 5705 Centennial Rd., Sylvania 43560, 419/882-8313, olanderpark.com

Hale Farm and Village
The site of settler Jonathan Hale’s original farm is now home to 32 historic structures. Immerse your little ones in traditional games, 19th-century lessons taught in an 1816 log schoolhouse and farm chores at this outdoor living history center. “It is a way for children and adults to experience community in a very real way — to relate it to who they are today but imagine themselves in that role,” says public program manager Lisa Pettry. Visit website for admission and hours; 2686 Oak Hill Rd., Bath 44210, 330/666-3711, halefarm.org

Sauder Village
Kids can try their hand at a combine simulator and get an up-close look at farm animals during Sauder Village’s weeklong Agriculture Adventures series, June 13 through 18. This event educates children about where their food comes from in a fun way. “They see the ground beef in cellophane wrapping or a gallon of milk,” says Jamie Napolski, assistant curator of education. “They don’t know the steps and the hard work that goes into producing it.” Visit website for admission and hours; 22611 St. Rte. 2, Archbold 43502, 800/590-9755, saudervillage.org

Slate Run Living Historical Farm
This Canal Winchester attraction invites kids to help in the garden, pump water at the well and see firsthand what life was like on an Ohio farm during the 1880s. Antique equipment and costumed historical interpreters help create the mood. Plus, the attention to detail here is incredible. For one, all animals at the farm are breeds that one would find on an 1880s Ohio farm. “It is a chance to connect with your family without the technology that we seem to rely on so much now for fun,” says manager Ann Culek. Free; visit website for hours; 1375 St. Rte. 674 N., Canal Winchester 43101, 614/833-1880, metroparks.net