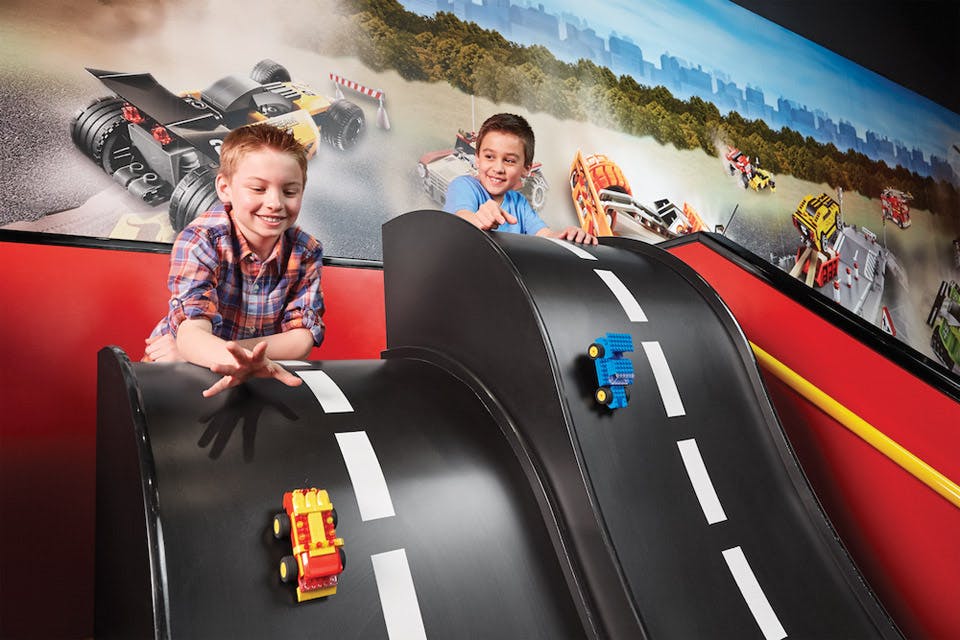 From a penguin conservation center to a Lego-brick wonderland, check out these road trip-worthy attractions.

Although Michigan’s Legoland Discovery Center is tailor-made for children ages 3 through 10, general manager Hayley Anderson guarantees that it will bring out the inner kid in all of us.

“The core of what Lego is all about is to really get your imagination and creativity flowing,” she says. “We honor that promise here for everyone.”

Miniland, an interactive scale model of downtown Detroit filled with landmarks made of Lego bricks, is a focal point of the 32,000-square-foot indoor playground. At the touch of a button, visitors can try their hand at hitting a miniature baseball in a replica of Comerica Park or sway to Motown music emanating from the model museum bearing the legendary record label’s name.

Automobile aficionados are invited to design and construct the car of their dreams with Lego Racers: Build & Test. “Dads, especially, love engaging in this activity with their kids,” Anderson says. “It’s a great bonding experience.”

Other attractions include the Kingdom Quest Laser Ride, which offers kids the chance to use their prowess to rescue a damsel in distress; and the 4-D cinema, which takes moviegoers on a trip to the enchanted World of Chima, a journey filled with rain, snow, wind, lightning and beloved Lego characters.

The creature comforts are sumptuous: 326,000 gallons of water ranging in depth from 8 inches to 25 feet, snow- and wave-making machines designed to mimic a polar environment, and terrain that’s easy on webbed feet.

But the most spectacular feature of the Detroit Zoo’s $30 million Polk Penguin Conservation Center, which opened in April, is the chance it offers visitors for a close-up look at the 83 birds residing in what is now known as the largest penguin facility in the world.

“We spent five years traveling back and forth to Antarctica to observe wild penguins in their native habitat,” says Scott Carter, chief life sciences officer for the Detroit Zoological Society. “Our goal was to make sure the penguins would have all they needed to be healthy. But we also wanted to give zoogoers a glimpse of what life is like in an environment that is so very different from ours.”

An underwater gallery and two acrylic tunnels offer tourists 360-degree views of penguins gliding above, below and around them. The conservation center’s 4-D environment was also designed to simulate the look and feel of explorer Ernest Shackleton’s 1914 expedition to Antarctica — right down to the frigid bursts of air, whipping wind and sea mist rising from a replica of his three-masted sailing ship, The Endurance.

The view is postcard-worthy: The aquamarine water reflects the azure sky above and offers a glimpse of the shifting sands below. Plus, Lake St. Clair is dotted with dozens of tiny islands ripe for exploring.

“There’s a reason [it] is called ‘The Little Caribbean,’ ” says Gerard Santoro, program manager of land and water resources in Macomb County, Michigan.

With an average depth of 11 feet, Lake St. Clair encompasses 430 square miles of freshwater and 130 miles of shoreline between Ontario and Detroit.
It has become a hub for recreational boating, birding and sports such as bicycling, paddleboarding, kayaking, swimming and, of course, fishing. Pro angler Kevin
VanDam heralds Lake St. Clair as the place to catch bass — as well as walleye, perch and pike.

Rent a kayak or a stand-up paddleboard at Lake St. Clair Metropark for a day of windsurfing or kiteboarding — or opt to take a dip in the park’s Olympic-size swimming pool featuring waterslides and squirt zones.

“There is something to do every minute here,” Santoro says. “But that doesn’t mean you can’t relax. Some visitors just like to sit on the shore, watch the waves and do nothing. It’s a great place to escape the realities of everyday living.” 734/207-0300, tourlakestclair.org

Will Peterson wasn’t one of the 73 million people who tuned in to see the Beatles make their American television debut in February 1964. But the impact John, Paul, George and Ringo had on rock ’n’ roll and pop culture is not lost on the 29-year-old.

“The universal themes the Beatles sang about — peace, love, the taxman — have withstood the test of time because they are applicable for everyone,” says Peterson, director of sales and marketing for Exhibits Development Group.

Through Sept. 18, Peterson’s Minnesota-based company is producing “The Magical History Tour: A Beatles Memorabilia Exhibition” at The Henry Ford museum in Dearborn.

More than 150 items are on display, including the original drum set from the Quarry Men, the band formed by John Lennon in 1956, which evolved into the Beatles; and a reproduction of the tiny stage at the Cavern Club in Liverpool, England, where the quartet honed their sound. But the artifact that elicits the most emotion is the album cover of John Lennon’s 1980 LP “Double Fantasy,” which he autographed for Mark David Chapman, several hours before Chapman assassinated the iconic musician.

Secrets of the Deep

After being injured when a boat struck him in Florida, Benson the sea turtle has gone on to become one of Sea Life Michigan’s most popular residents. Although he was nursed back to health at the Georgia Sea Turtle Center, the accident left him unable to forage for food.

So, Benson happily eats each morning at Auburn Hills’ 35,000-square-foot aquarium under the watchful eyes of the visitors who crowd around his tank. The turtle is one of 5,000 marine animals — from miniature seahorses to the stately southern stingray with an impressive 4-foot wingspan — that live at Sea Life.

“The amazing thing about Sea Life is that it is built for families,” says curator Kelli Cadenas. “Our walk-through acrylic tunnel exhibits offer spectacular 180-degree views, which are accessible to children. ... When my 3-year-old is running around the aquarium, he can easily see everything. Touchpads make it easy for older kids and adults to push a button and learn about the fish swimming right in front of them.”

Visitors also have the chance to pet crabs, sea stars and sea urchins in the touch pools and take behind-the-scenes tours to discover how each creature is cared for. “To get any closer,” Cadenas says, “you’d have to get wet.” 4316 Baldwin Rd., Auburn Hills, Michigan 48326, 866/622-0605, visitsealife.com/michigan