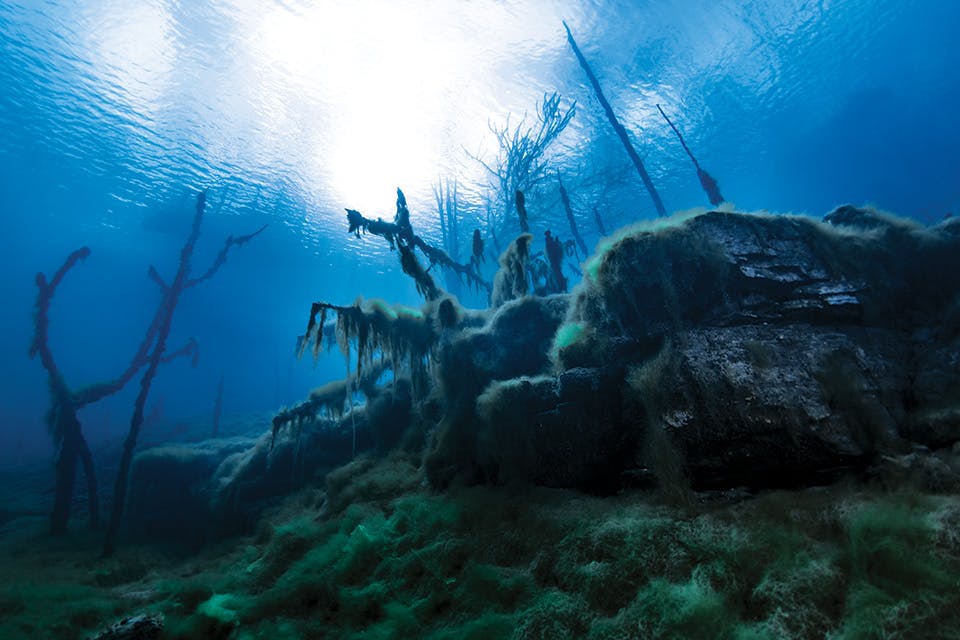 When the diving season starts each year, a former limestone quarry in the village of Ottawa becomes a hot spot for Ohioans who want to do some underwater exploring. With depths of up to 140 feet, schools of fish and wreckage to help hone shipwreck-diving skills, Gilboa Quarry owner Mike Williams calls his dive site the best-kept secret in Putnam County.

“We get people here from 10 states and Canada,” he says. “But there are a lot of people who live nearby who don’t know about it.”

Mining began at the quarry in 1891 and stopped at some point in the late 1970s or early 1980s. (“Nobody’s ever given me a straight answer,” Williams says.) It’s been used for diving since 1990. Because the temperature at the quarry’s bottom never rises above  41 degrees, the conditions are consistent with those present for shipwreck diving. The quarry also attracts divers who visit to explore the submerged Grumman airplane and Sikorsky helicopter.

But the biggest attraction, Williams says, is the 17 varieties of fish, including a 7-foot lake sturgeon, koi more than 30 inches long and several kinds of trout. (They’re only for observation, though. A no-fishing rule is strictly enforced, since fishing line can pose a hazard to divers.)

The quarry offers chances for experienced divers to hone their skills, but novice divers also have the opportunity to get their feet wet.

“We offer training at all levels,” Williams says, including a discovering-diving course in the quarry’s shallow end, which has depths of 20 feet. The quarry also encourages relationships between divers, adding a buddy board last year for people who don’t want to dive alone. “For someone who’s considered scuba diving, this is a great place to start.” 3763 Old State Route 224, Ottawa 45875, 419/465-3300, divegilboa.com