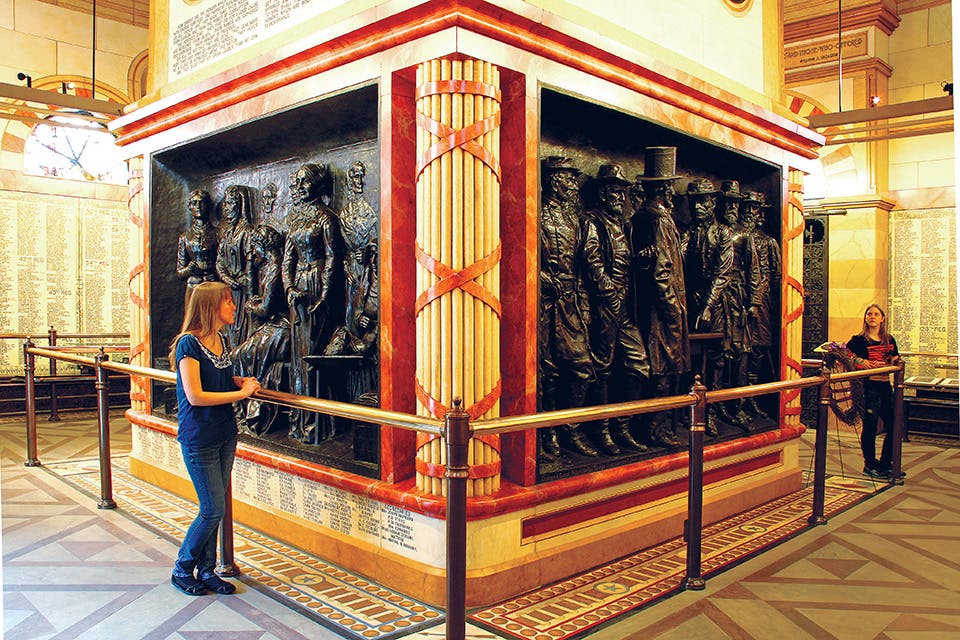 Downtown Cleveland’s memorial to Cuyahoga County’s Civil War veterans is a reminder of the role Ohioans had in helping preserve the Union.

The Soldiers’ and Sailors’ Monument is one of the most recognizable features of Cleveland’s Public Square and even has a cameo in the parade scene of the classic holiday film “A Christmas Story.” But what many people don’t know is the memorial’s interior pays tribute to the 9,000 people who volunteered for the Civil War in Cuyahoga County.

Dedicated in 1894, architect Levi T. Scofield’s monument is most recognizable by its 125-foot soaring column topped by the Goddess of Freedom defended by the Shield of Liberty, but the Memorial Room at the center of the monument is open to the public. There, visitors can view four bronze relief sculptures that trace the progression of the war, while the names of those who fought to preserve the Union are etched into the walls.

The most poignant of the four sculptures is the one facing north that depicts the emancipation of the slaves. It shows Daniel Field being unshackled by Lincoln as he hands the man a gun so he can fight. (It is the only historic depiction of Lincoln with a firearm.)

“This is the first piece of art after the Civil War to have a man of color on it,” says Shane Doyle, caretaker of the Soldiers’ and Sailors’ Monument. “Dan Field was born into slavery, escaped slavery ... and he helped build this place.” 3 Public Square, Cleveland 44114, 216/621-3710, solidiersandsailors.com