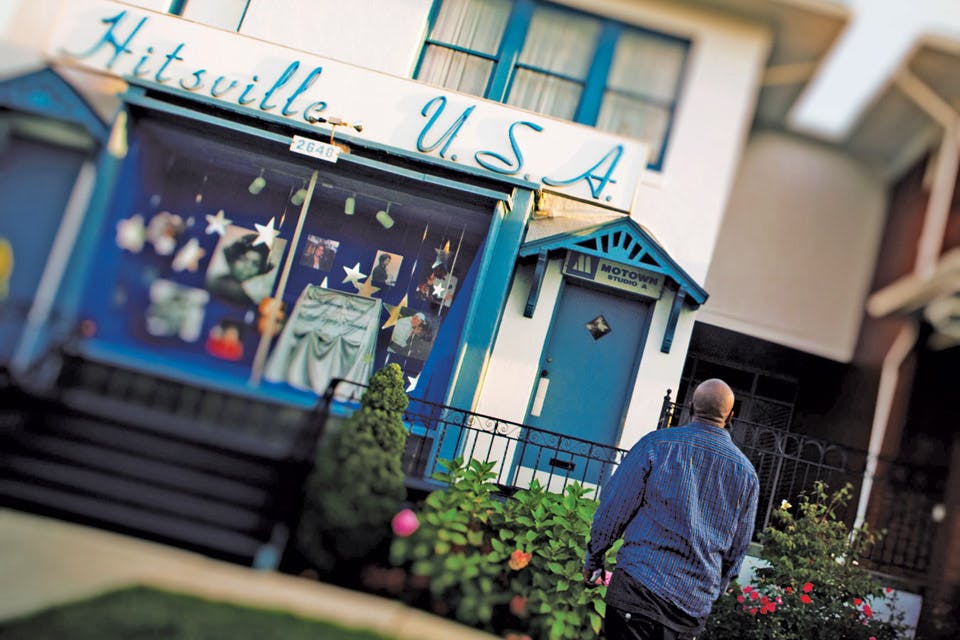 A visit to Detroit offers a walk through the history of America’s pop sounds.

Automobiles aren’t the only driving force behind the Motor City’s fame. Music clearly holds its own as a vibrant part of Detroit’s heartbeat. In fact, the city enjoys a renowned reputation as a major hub for blues, gospel, jazz, classic rock and soul.

In addition to celebrated landmarks that chart the city’s noteworthy place in history, Detroit also hosts a variety of music events throughout the year, including the Downtown Hoedown country music festival, which takes place June 5 and 6 with Darius Rucker and Rascal Flatts as headliners, and the 36th annual Detroit Jazz Festival, held over Labor Day weekend.

“Music and cars have always gone hand in hand,” says Eric Whitaker, co-owner of Baker’s Keyboard Lounge, a Detroit institution that showcases jazz artists from around the globe. “Throughout time, our city’s greatest engineers invented wonderful sound systems for automobiles, which allow music to be listened to wherever people go.”

Each year, more than 60,000 tourists come to the Motown Museum — housed in two modest duplexes nicknamed Hitsville USA — to see where a legendary lineup of luminaries, ranging from Marvin Gaye to Michael Jackson to The Marvelettes, recorded their chart-toppers from 1959 to 1972.

“No other record company in history has had the impact Motown has had when it comes to bridging racial, cultural and social divides,” says Robin Terry, Gordy’s grand-niece, who serves as chairman and CEO of the museum. “And with more than 180 No. 1 hit songs worldwide and counting, that influence is still being felt today, from pop to hip-hop.”

Visitors can stand on the spot where Diana Ross and The Supremes recorded “Stop! In the Name of Love” and sit behind the 8-track console in the control room Smokey Robinson manned during rehearsals with The Miracles.

Through September, the museum presents “Boulevard to Broadway,” an exhibition showcasing the life of Gordy — a former boxer, record store owner and assembly line worker — who found his niche as a hitmaker. “The Motown story is a phenomenal one,” Terry says. “The music it created is grounded in such universal truths as love, hope and faith that people everywhere connect to.” 2648 W. Grand Blvd., Detroit 48208, 313/875-2264, motownmuseum.org


Jazz Legend
Baker’s Keyboard Lounge regulars still talk about the night Ella Fitzgerald stopped in to hear her good pal, Detroit native and jazz pianist Tommy Flanagan, play here. The songstress ended up staying and singing her greatest hits into the wee small hours. And then there was the day Liberace came by to see the lounge’s keyboard-shaped bar, which wound up being the model for the piano-shaped swimming pool the entertainer installed in his Beverly Hills backyard.

“Baker’s is over 80 years old and has been historically labeled as the ‘world’s oldest jazz club’ because it’s one of the original jazz venues that’s still in operation,” says Eric Whitaker, who has co-owned the club since 2011.

It didn’t take long for the neighborhood lunchtime beer and sandwich shop Chris and Fannie Baker opened in the early 1930s to become a premier place for jazz. The couple’s 16-year-old son, Clarence, came up with idea of offering after-hours entertainment, asking his parents to purchase a piano.

“Word spread, and many of the greats would stop by for jam sessions after their regular gigs were finished,” says Whitaker, who has unforgettable memories of seeing Miles Davis perform. Recent headliners include funk saxophonist Ronnie Laws and jazz trumpeter Tom Browne.

Whitaker credits much of the club’s success to the intimate ambiance enhanced by Harry Julian Carew’s art deco paintings of European city landscapes and the tilted mirrors that allow patrons to view the pianist’s hands at work.

“Our two-seater booths have been the site for many, many marriage proposals,” Whitaker says. “That’s also a tradition we’re proud of.” 20510 Livernois Ave., Detroit 48221, 313/345-6300, theofficialbakerskeyboardlounge.com


For the Record
The framed LPs lining the walls of United Sound Systems Recording Studios form a path paved with gold — records, that is.

Manager Chynita Richards estimates that since the studio opened in 1933, hundreds of artists have booked time to record their hits — Charlie Parker, Isaac Hayes and Marvin Gaye to name a few.

“We are a museum that remains open for new business,” Richards says. She adds that United’s open-door policy quickly made it a beacon for new talent. As the first independent and full-service major recording studio in the nation, it allowed musicians, writers and producers to record music without being signed to a major label.

“Anyone could come in here, record a song, get it pressed on a lathe in the basement and walk out of here with a record in their hand the same day,” Richards says. “Berry Gordy brought his artists here before he founded Motown.”

Visitors can tour Studio A, where George Clinton, Bootsy Collins and the Red Hot Chili Peppers recorded funk. Aretha Franklin held court here to create the song and video for her cover of The Rolling Stones’ “Jumpin’ Jack Flash” and Stevie Wonder laid down tracks for “My Cherie Amour.”


Hidden Splendor
Visitors to The Fillmore Detroit are greeted with Italian Renaissance opulence from the moment they enter the theater. The outer lobby’s coffered ceiling is resplendent in rich tones of burgundy and green adorned with gold leaf, while original crystal chandeliers and wall sconces cast a soft glow over the auditorium.

“The Fillmore is an exquisite example of historic preservation that looks much as it did when it opened in 1925,” says general manager Ben Doughty. “Maintaining the theater is truly a labor of love.”

Built as a movie house, the theater was converted into a 2,888-seat concert hall and special-events facility in 1998. It was renamed The Filmore Detroit in 2007. Although films are screened year-round, Doughty says live performances have become the main attraction. The summer lineup features My Morning Jacket (June 16 and 17), Awolnation (July 2) and Meghan Trainor (July 9).

“National bands love playing [here]. It offers an alluring mix of old and new, history and revival,” Doughty says. “You’d never know on the outside how gorgeous it is inside.” 2115 Woodward Ave., Detroit 48201, 313/961-5451, thefillmoredetroit.com


Grand Revival
There may not be a phantom in residence, but that doesn’t mean the Detroit Opera House isn’t filled with Broadway magic. “Newsies” is scheduled to take center stage in December, followed by “Rodgers and Hammerstein’s Cinderella” in February. And then, of course, there’s the art form the place was restored for.

“Opera is the quintessential musical theater,” says David DiChiera, founder and artistic director of Michigan Opera Theatre. “Composers write a story with music that delves deeply into the emotions characters are feeling in a way other [dramas] do not.”

Puccini’s tale of love and loss, “La Boheme,” will be staged Oct. 17 through 25; and “The Passenger,” Mieczyslaw Weinberg’s poignant drama centering on the aftermath of the Holocaust, will be performed Nov. 14 through 22.

Opened in 1922 as one of the city’s first movie palaces, the building fell on hard times during the 1960s and eventually closed. But in 1990, after surveying the interior and looking past the cracked plaster, leaky ceiling and flooded orchestra pit, DiChiera saw what the site could be. He asked his friend, legendary operatic tenor Luciano Pavarotti, to take a look.

“He did, and told me that if I finished the project, he would come back and inaugurate the theater for me,” he recalls.

Pavarotti made good on that promise six years later.