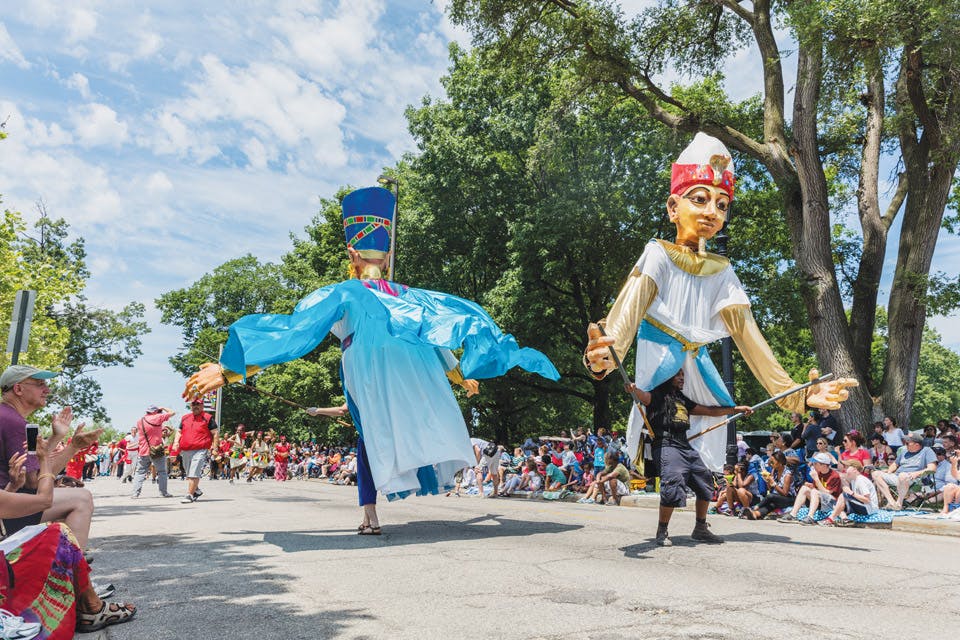 Witness a human-powered parade followed by a full day of family fun, shop for something special to take home at the Columbus Arts Festival and more.

May 2017 Issue
BY Hallie Rybka | Photo by David Brichford, courtesy of Cleveland Museum of Art

May 2017 Issue
BY Hallie Rybka | Photo by David Brichford, courtesy of Cleveland Museum of Art

6/2: Ween, Emmylou Harris, Twin Peaks and Parquet Courts are just the start to the lineup of more than 60 acts heading to southeast Ohio for the Nelsonville Music Festival. Performances take place at multiple venues, from the main stage to a picturesque porch to a cabin featuring acoustic artists. June 1–4, nelsonvillefest.org

6/4: Camping meets music festival during the Bluegrass Pickin’ Weekend at Dillon State Park. Explore the 2,285 acres, but don’t forget your lawn chairs and instruments so you can jam along with other bluegrass enthusiasts throughout the weekend. June 2–4, parks.ohiodnr.gov/dillon

6/5: Help instill a love for music in your little ones. The Lolli-Pops! Summer Children’s Concert Series returns to Powell with a morning of interactive performances at the Village Green Amphitheater. June 5, July 10, Aug. 7, cityofpowell.us

6/7: It’s been 40 years since Tom Petty and the Heartbreakers first made their mark on the music world. The Rock & Roll Hall of Fame inductees behind hits such as “American Girl,” “Don’t Do Me Like That” and “Refugee” perform at Columbus’ Schottenstein Center. schottensteincenter.com

6/8: Before she was performing her album “Tapestry” at Carnegie Hall, Carole King was penning hits with husband Gerry Goffin on her way to creating the soundtrack for a generation. “Beautiful — The Carole King Musical” traces her inspiring true story of love, heartbreak and rise to stardom. June 6–11, columbus.broadway.com

6/9: Swing into the ’40s, ’50s and ’60s aboard the Valley Gem Sternwheeler, as the Campus Martius and Ohio River museums present Jazzin’ Up the Museums. The two-hour cruise features a buffet-style meal and a live band. campusmartiusmuseum.org

6/11: Head to our capital city, where the Columbus Arts Festival transforms the downtown riverfront into an outdoor art gallery. Artists from across the country display their works along the Scioto River, while gourmet fare, live music, theater performances and activities add to the fun. June 9–11, columbusartsfestival.org

6/12: The forest looks a bit different from 65 feet in the air. See it for yourself as you step onto Holden Arboretum’s Murch Canopy Walk, a 500-foot-long elevated pathway that puts you on a whole new level within the 3,600-acre attraction. holdenarb.org

6/13: Embrace Ohio’s farming roots at Sauder Village. The weeklong Agriculture Adventures event at this living-history museum devotes each day to a new theme, from dairy to wheat to goats and sheep, providing a range of hands-on activities and the chance to connect with your inner farmer. June 13–18, saudervillage.org

6/14: This summer, Columbus’ Ohio Village enters a new era: the 1890s. Star in your own vintage photo shoot, step into a period-appropriate bicycle shop, chat with costumed characters and try your hand at old-fashioned games on the village green. ohiohistory.org

6/15: The city of Logan is proud to be the home of the Columbus Washboard Co., and the southeast Ohio town celebrates that fact during the Washboard Music Festival. Enjoy carnival rides, games, midway fare and a weekend of bluegrass and folk music with the washboard serving as the star instrument, of course. June 15–17, washboardmusicfestival.com

6/16: The Put-in-Bay Maritime Celebration makes a splash with activities for the whole family. Explore the island’s history, dive into 6,000 square feet of displays at the Lake Erie Islands Historical Society & Museum, listen to live music and more. June 16–18, visitputinbay.com

6/17: Between the ethnic eats (think cabbage, brats and homemade noodles) and the beer garden stocked with Eastern European staples, you’d be wise to get a little extra exercise at Youngstown’s Simply Slavic Heritage Festival. Luckily, the live music and folk dance performances are sure to have you on your feet. simplyslavic.org

6/18: From traditional tunes to Celtic rock to pipes and drums, the sounds of the Emerald Isle can be heard in Waynesville, as Celtic Fest Ohio returns with five stages of music, Guinness tastings and Scottish, Irish, English and American fare. June 16–18, celticfestohio.com

6/19: Get pedaling! The Great Ohio Bicycle Adventure takes off from Findlay. Journey 50 miles each day along a scenic route on this biking-meets-camping tour. June 17–24, goba.com

6/20: Fall under the spell of “An American in Paris.” The new Tony Award-winning musical brings the magic and romance of the City of Lights to Cleveland’s Playhouse Square with a little help from the music of George and Ira Gershwin. June 20–July 9, playhousesquare.org

6/22: Dust off your cowboy boots. Country Fest is bringing an all-out jam to Clay’s Park Resort in North Lawrence with some of the hottest names in country music, including Jake Owen, Justin Moore and Blake Shelton. June 22–24, thecountryfest.com

6/23: The Crosby Festival of the Arts returns to the Toledo Botanical Garden. Read more about it below

6/24: Before he was a baseball great, Cy Young was a farm boy in Tuscarawas County. Honor the celebrated pitcher during Cy Young Days in Newcomerstown with entertainment, a parade, a car show and more, plus an old-fashioned baseball game at Cy Young Park. June 23–25, cyyoungdaysfestival.com

6/25: Ever wonder what lies beyond that cottage door or garden gate? The Haus und Garten Tour in Columbus’ German Village neighborhood offers visitors access to a stunning collection of homes and gardens, showcasing the neighborhood’s ongoing historic preservation as well as inspirational interior and landscape design. June 24–25, germanvillage.com

6/26: Beat the heat at Caesar Creek State Park. A new marina opened last summer at the 3,741-acre park and nature center, where anglers can sink a line for smallmouth bass, largemouth bass and crappie. The park also features a 1,300-foot public beach so you can take a dip. parks.ohiodnr.gov/caesarcreek

6/27: Grab a bite, relax next to the fire and dance your way into the night with the lights of the Columbus skyline as the backdrop. The Boat House at Confluence Park welcomes Baila Rico Salsa, so you can practice your cha-cha and bachata moves. boathouserestaurantoh.com

6/29: Love and war set the scene for “South Pacific,” but Rodgers and Hammerstein’s iconic musical numbers cemented their own place in history. Newark’s Weathervane Playhouse takes on the 1949 Broadway hit in what is sure to be “Some Enchanted Evening.” June 29–July 8, weathervaneplayhouse.org

Art in Bloom
The 52nd annual Crosby Festival of the Arts showcases beautiful works of art against the backdrop of the Toledo Botanical Garden.

Every June, the perennials, herbs and roses that call the Toledo Botanical Garden home are joined by an influx of visitors flocking to the Crosby Festival of the Arts.

Ohio’s oldest outdoor juried art festival, set this year for June 24 and 25, welcomes 240 artists from across the country, as well as some from abroad, who display and sell their works in 10 mediums, ranging from painting to jewelry making.

“We have artists coming from California to Florida to Canada and everywhere in between” says Karen Ranney Wolkins, executive director at the Toledo Botanical Garden.

Now celebrating its 52nd year, the Crosby Festival of the Arts is the only show of its size in the region. A Friday evening preview allows patrons to be the first to purchase art. All participating artists are eligible for show awards, with three award winners in each medium and a best in show award.

“We are very committed to the quality of the work and the artists who are coming from all over for this event,” adds Wolkins. “There are price points for just about everyone.”

“There’s a sea of white tents and each one has a treasure inside, making it an amazing experience,” says Matt Killam, event organizer at the Toledo Botanical Garden. “There aren’t many juried fine art shows left. It’s genuine, it’s authentic, and it’s unique to our area.“  — Emily Wilbur