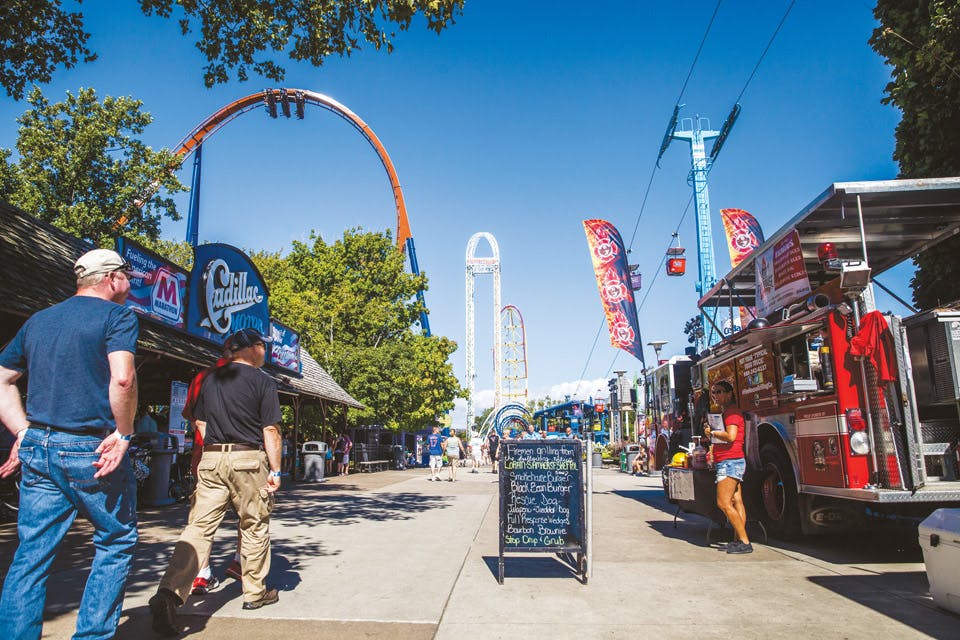 May 2017 Issue
BY Hallie Rybka | Photo by Jorden Sternberg, courtesy of Cedar Point

May 2017 Issue
BY Hallie Rybka | Photo by Jorden Sternberg, courtesy of Cedar Point

8/1: Roll up to Cruisin’ on the Square, a weekly display of classic and vintage cars held in Milan, the birthplace of inventor Thomas Edison. Oldies music sets the mood, while the cruisers line the town square. May 2–Sept. 26, cruisemilan.com/carshow

8/2: Whether you pack a picnic or plan to nosh on food truck fare, schedule dinner at Wade Oval Wednesdays. This free weekly concert suitable for the whole family takes place in the heart of Cleveland’s University Circle. June 4–Aug. 30, universitycircle.org

8/3: Tip your hat to the “King of the Cowboys.” A bit of the Old West takes over Portsmouth for the Roy Rogers Festival, featuring memorabilia and souvenirs from the Westerns of yore, as well as celebrity appearances and a Roy Rogers look-alike contest. Aug. 2–4, 740/353-0900

8/5: Let it go! Idina Menzel has wooed audiences in “Rent,” melted hearts as Elphaba in “Wicked” and broken the ice as the voice of Elsa in Disney’s “Frozen.” The Tony Award winner stops at Dayton’s Fraze Pavilion as part of her world tour. fraze.com

8/6: Make way for the gridiron greats. The Pro Football Hall of Fame Enshrinement Festival celebrates the Class of 2017 with the Hall of Fame Game, parade, enshrinement ceremony and the Concert for Legends, held at Tom Benson Hall of Fame Stadium. Aug. 3–6, profootballhof.com

8/7: Rising 352 feet into the air, Perry’s Victory and International Peace Memorial stands as a beacon of the long-lasting friendship between the United States, Great Britain and Canada. Make this National Park Service site a stop on your visit to Put-in-Bay. nps.gov/pevi

8/8: Foreigner has accumulated 10 multiplatinum albums and rocked the charts with hits such as “Hot Blooded” and “I Want to Know What Love Is.” The group is celebrating 40 years by hitting the road with Rock & Roll Hall of Famers Cheap Trick, stopping at Cincinnati’s Riverbend Music Center. riverbend.org

8/10: More than 60 iconic costumes from a galaxy far, far away make an appearance at the Cincinnati Museum Center. The informative exhibition “Star Wars and the Power of Costume” presents wardrobe featured in all seven films of the “Star Wars” saga, including pieces worn by Chewbacca, Darth Vader and Queen Amidala. May 25–Oct. 1, cincymuseum.org

8/11: In a patchwork of shapes and colors, inflated orbs rise over Findlay during the Flag City BalloonFest. Take a ride or watch from the ground, where the festival also offers food, a beer garden, pony rides, music and more for all ages. Aug. 11–13, flagcityballoonfest.com

8/12: Get on track at Summerail. The annual railroad-themed multimedia exhibition at the Palace Theatre is a short walking distance from the Marion Union Station, now a museum on the National Register of Historic Places filled with displays and memorabilia. summerail.com

8/13: Chow down at the National Hamburger Festival in Akron. Read more below.

8/14: Cavatelli and meatballs or cannoli? Which of Cleveland’s Little Italy restaurants you want to sample is likely the toughest choice you’ll make at the Feast of the Assumption. A daytime and evening procession honors the Blessed Virgin Mary, and the food and rides are around to be enjoyed all weekend. Aug. 12–15, holy-rosary.org

8/15: Bring your fiddle, banjo or guitar and join in the Old-Time Music Jam at The Bowen House, a center for cultural arts in Logan. An instructor leads this monthly session open to anyone ready to pick up an instrument. explorehockinghills.com

8/16: COSI is having a cosmic summer. See the giant-screen film “Journey to Space,” take in the planetarium show “Asteroids: Mission Extreme” and explore the solar system at the July 6 “Be the Astronaut” event for those 21 and over. May 27–Sept. 4, cosi.org

8/17: Music, Flowers & a Sunset returns to Vermilion every third Thursday throughout the summer. Stroll the streets, dip into the shops, savor a scoop of ice cream and relax in this quaint town as more than 10 musical acts enhance the evening. May 18–Sept. 21, vermilionchamber.net

8/18: Bikes, brews and music are on deck for Ironton’s Rally on the River. You’ll be in hog heaven with a full lineup of entertainment, plus a bike show, a car show and nearby camping. Aug. 17–19, rallyontheriver.net

8/19: Some say it’s a fruit, some say vegetable. But no matter how you slice it, the Reynoldsburg Tomato Festival honors this tasty ingredient and Ohio garden staple with a lineup of musical performances, children’s activities, a car show, a spaghetti-eating contest and, of course, a whole lot of food. Aug. 18–19, reynoldsburgtomatofestival.org

8/20: Brush up on your knowledge of Carpatho-Russian culture at the Holy Assumption Halupki Festival in Marblehead. Dine on the event’s namesake cabbage rolls, pierogies, sausage and other tasty Russian-style foods, and let live polka music put a hop in your step. holyassumptionmarblehead.org

8/21: Drop, twist, go airborne and feel free to scream. Cedar Point provides the ultimate thrill, with 17 roller coasters, plus a water park, thrill rides and games that even the tamest members of the family can enjoy. cedarpoint.com

8/22: Flex your trivia skills at “Presidential Pop Culture: The Art of Influencing Perception.” This lighthearted exhibition at the Rutherford B. Hayes Presidential Library & Museums includes cartoons, memorabilia and movie clips. Through Oct. 8, rbhayes.org

8/24: The harvest season is a joyful time in the Buckeye State. Celebrate that fact at the Obetz Zucchini Festival, featuring zucchini judging, kids activities, the queen and princess pageant, a car and motorcycle show, a parade and a lineup of entertainment. Aug. 24–27, obetzzucchinifest.com

8/26: It looks like it should be in the Old West, but Findlay’s Ghost Town is a historical village and museum right here in Ohio. Search for treasures during the Ghost Town Crafts and Antiques Show. Aug. 26–27, visitfindlay.com

8/27: Swing along to “Blues in the Night” and other hits by female jazz greats, including Billie Holiday and Sarah Vaughan as the Cleveland Orchestra presents “A Tribute to Ella Fitzgerald” at Blossom Music Center. clevelandorchestra.com

8/28: Endangered animals are the focus of Franklin Park Conservatory’s “Topiaries at the Conservatory: Wild Wonders.” Horticulturalists plant, design and sculpt 14 topiaries displayed throughout the courtyards and biomes of this Columbus attraction. May 20–Oct. 29, fpconservatory.org

8/29: Get a look into Ohio’s past and Native American history at Fort Ancient. The 9,000-square-foot museum in Oregonia features exhibitions and a hands-on classroom. Outside, visitors can explore the earthworks as well as 2 1/2 miles of walking trails. fortancient.org

8/31: Fuel up at The Taste. Fraze Pavilion’s festive event offers samples of delicious food from a variety of Dayton-area restaurants, including favorite participants from previous years. fraze.com 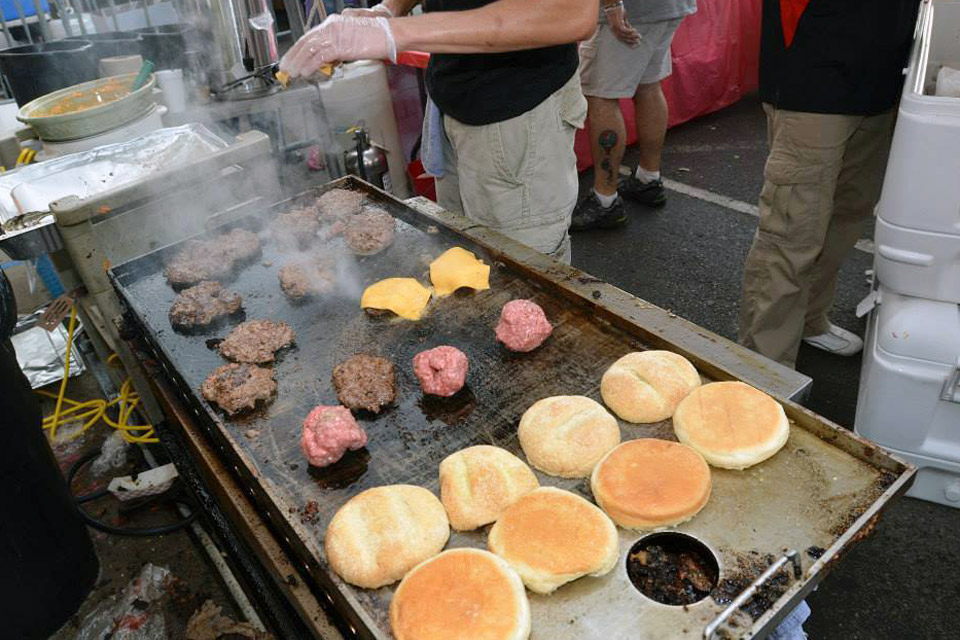 The hamburger wasn’t always synonymous with American cuisine. Although the origins of a ground-beef patty served between pieces of bread are unclear, one version of the story claims that Akron brothers Frank and Charles Menches unveiled the creation in 1885 at the New York State Fair in Hamburg, New York.

More than 125 years later, hamburger lovers gather in the Menches brothers’ hometown to salute the sandwich during the National Hamburger Festival, set this year for Aug. 12 and 13. The celebration draws more than 20,000 people to enjoy family fun, live music and a variety of creative burgers.

Twenty local restaurants and eateries serve a total of nearly 50 hamburger varieties. Sammie’s Bar and Grill and the Menches Brothers Restaurant & Pub are among the restaurants serving burgers at this year’s festival.

“The Menches Burger is known as the original hamburger from 1885, and Sammie’s has their original Sammie’s Burg, which has won first place [at the festival] for best traditional burger,” says festival founder Drew Cerza.

Held at Lock 3 Park in downtown Akron, the two-day event’s activities and exhibitions include the Ohio Hamburger Eating Championship, a burger cook-off, a Miss Hamburger Queen Pageant and a bobbing-for-hamburgers contest in a kiddie pool filled with ketchup.

“My favorite contest is the bobbing for burgers,” says Cerza. “We throw 50 foam hamburgers in the pool and three people go in face first, no hands, and pull out as many as they can in three minutes.”

Live country music sets the mood on Saturday, while Sunday brings a lineup of craft beer events, including creations from Akron’s own Thirsty Dog Brewing Co.

Akron officials approached Cerza, president and CEO of New York-based Just Wing It Productions, about creating a burger fest for the city after seeing the success he had launching the National Buffalo Wing Festival in Buffalo, New York.

“Akron has great people, hard-working people, and it’s that Rust Belt-type city with great food,” says Cerza. “It seems just about every restaurant in Akron serves hamburgers, similar to most Buffalo restaurants serving chicken wings. ... I had a good feeling the festival would work, and it does.”  — Emily Wilbur