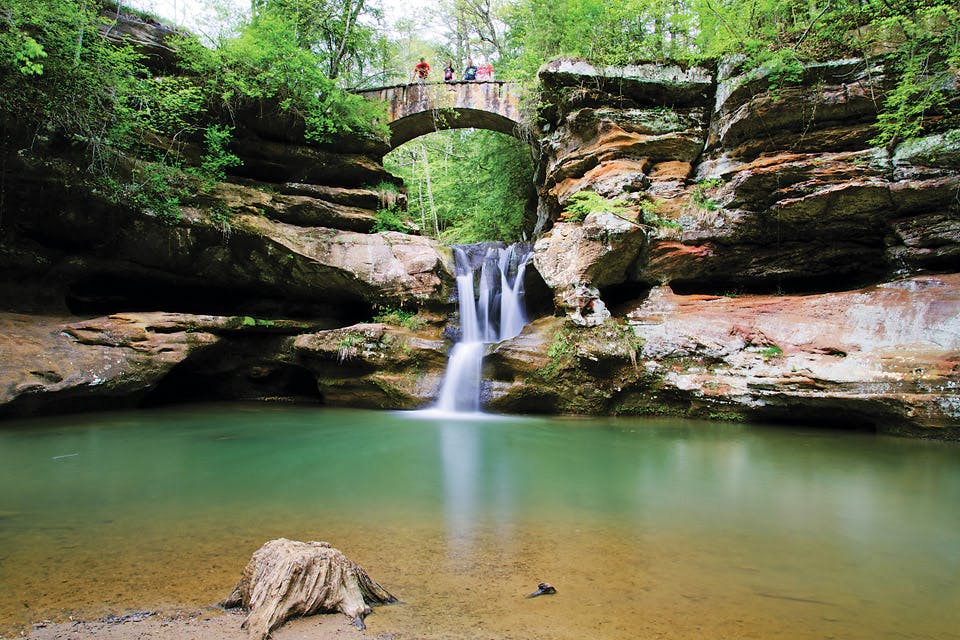 When it comes to wilderness, the caves, cliffs and gorges of Hocking Hills State Park offer some of Ohio’s most stunning hikes and sights.

As we descended the well-worn stone staircase for the first time, the lushly wooded gorge immediately took my breath away. Our first visit to Old Man’s Cave was a Sunday morning respite from Nelsonville Music Festival, a chance to stretch our legs and enjoy the undisturbed peace of southeastern Ohio wilderness. Despite having visited dozens of National Parks across the country, my husband and I weren’t prepared for the unparalleled beauty we discovered within Hocking Hills State Park.

Although we initially planned only to visit the major landmarks, we became increasingly enchanted at every turn, and instead chose to hike to see every waterfall, cave and cliff we could. Mesmerized by the gothic-arched windows and great sandstone columns of the Rock House, the turbulent waters that slowly smooth the walls of Devil’s Bathtub and the idyllic view of the Upper Falls at Old Man’s Cave, we could have easily spent several days exploring. Only an hour in, we were already planning our next visit.

No location in Ohio is quite as romantic or wildly stunning as the Hocking Hills, with its postcard-ready waterfalls and deep, wooded ravines laced with hemlock trees and ferns. Standing inside the massive horseshoe-shaped Ash Cave, the history of the place is as impressive as the landscape itself. Named after a huge pile of ash found here by early settlers, the cave provides shelter for hikers as they admire the falls that trickle down from above, just as it provided shelter for Native Americans and early travelers along the Indian Trail (now state Route 56) in centuries past. Throughout the year, Ash Cave is a sight to behold, whether the valley floor is covered in delicate trillium and jewelweed, or the falls have formed a frozen column of ice. It’s not uncommon to see children splashing under the falls during the dryer months, when the water descends softly like summer rain.

Old Man’s Cave — named after hermit Richard Rowe, who called the large recess cave home in the late 1700s — is one of the park’s most beloved landmarks. Located between the Upper and Lower falls, the cave is usually a hub of activity, as visitors wind through the stairways and make their way into the magnificent gorge. Carved by the creek, the gorge cuts through the thick black hand sandstone (the stone present in all of the park’s noteworthy formations) offering a peek into the earth’s subsurface. As hikers make their way to the Lower Falls, the famous Sphinx Head greets them from the moss-covered wall like an old friend. Flanked by waterfalls and covered by a canopy of green along the ridge, the trails around and through Old Man’s Cave rank high on my list of favorites.

Much like the Tetons belong to Wyoming and the Grand Canyon to Arizona, the beauty of the Hocking Hills belongs to Ohio. Home to numerous Native American tribes, pioneers, settlers, bobcats, barred owls and whippoorwills, Hocking Hills State Park is a haven for all who seek its beauty. It is wilderness just waiting to be discovered by someone new — someone like you. explorehockinghills.com