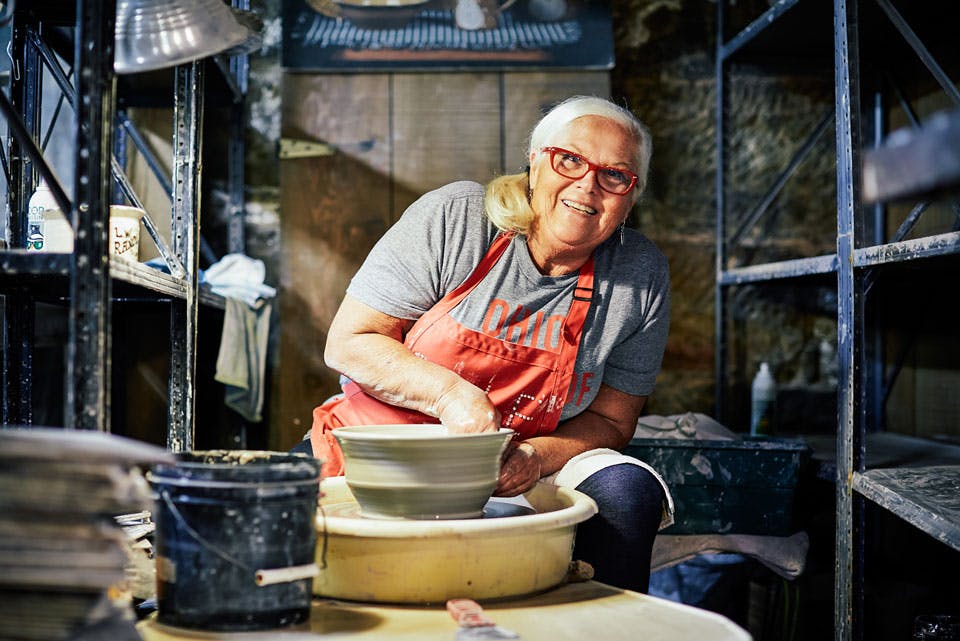 From a restored canal town to the nation’s largest maker of American flags, history, creativity and patriotism converge here.

Sturdy ceramic works line the shelves of Becky Lowe’s basement pottery studio. Handmade stoneware mugs with the raised outline of the state of Ohio rest alongside wedding and new-baby plates that bear the dates of celebrated family moments.

“My husband and I moved here from college [in 1970], and we absolutely love this community,” says Lowe. Her shop, Ohio State of Mind, is located in Coshocton’s historic Roscoe Village, a restored Ohio and Erie Canal town that serves as both a draw for out-of-town visitors and a reminder of the city’s past. “We have traveled all over,” Lowe adds, “so we say now we have the best of both worlds.”

The couple raised a daughter here, and Lowe owned Three Rivers Pottery, which closed in 2001. Her newest venture, which opened last year, carries goods crafted by more than 75 artisans who call the state home. Lowe’s artistic spirit and industrious nature are representative of the historical undercurrents running through Coshocton. The city is known as the birthplace of promotional advertising — the idea of using serving trays, calendars and other everyday items as canvases for advertisement space. Jasper F. Meek, the publisher of the town’s weekly newspaper, came up with the idea in 1889 as a way to keep his business viable. It also brought an influx of artists to town.

“At one time, we had the largest concentration of fine artists east of the Mississippi other than New York City,” says Coshocton Mayor Steve Mercer, who has coined his town “The Made in the USA City.” “We have been the innovators of certain industries that started right here many years ago.”

McWane Ductile, an iron pipe manufacturer, has ties to the city that reach back to 1909. WestRock paper mill, previously RockTenn, began operation in 1863. New industry has found its place here, too. A recent Kraft Foods and Heinz merger created 300 new jobs.

What defines the town’s “Made in the USA” pedigree most notably though is Annin Flagmakers. The company is the nation’s oldest and largest manufacturer of American flags, making approximately 130,000 per week and doubling that number during its busy season.

“I know that I’m making a product that represents our country, and there are a lot of people who give their lives for that. You don’t take stuff like that for granted,” says Nancy Lawson, a 36-year veteran of the factory, which employs 155. “It makes me proud to sew them.”

The city’s downtown core is being tended to with the same pride. A $2.4 million road-paving project was recently completed. It’s the beginning of what city leaders hope to be a revitalization of the city core, where businesses such as Carton’s Shoes (held in the same family since 1909), Carroll’s Men’s Shop, Mercantile on Main and Dean’s Jewelry currently serve shoppers.

Just like Becky Lowe chose Coshocton as a place to call home, her daughter Jennifer Lowe Nelson has as well. After years of dancing in California, Nelson returned home to raise a family and to open Miss Jennifer’s Dance Studio, which is housed in the town’s 80,000-square-foot, nonprofit recreation center, Kids America.

“They get out and they see the world — and you want them to do that,” says Lowe, when discussing her daughter’s return. “But then they see the value of what is still really important, which is family and home and connections.”