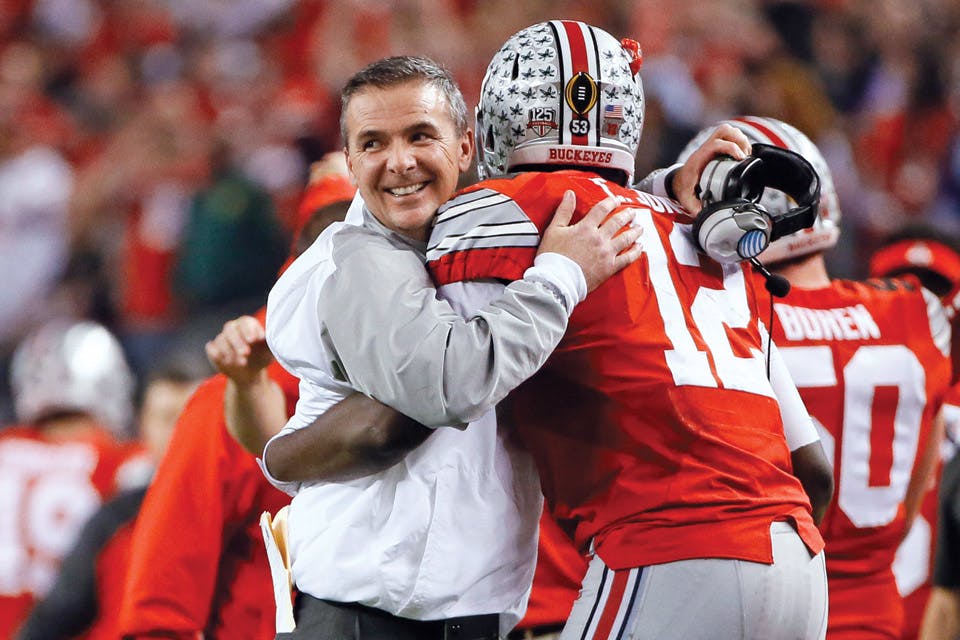 We talked to the Buckeyes head coach about motivation, preparation and what turns challenges into a championship.

Winning it all isn’t easy. Urban Meyer just makes it look that way.

Leading the University of Florida to national titles in 2006 and 2008 made Meyer a household name, but what he did with the Ohio State football program last season bordered on the miraculous.  An early-season setback to Virginia Tech and the loss of two starting quarterbacks resulted in Meyer rallying his high-octane Buckeyes to impressive wins over Wisconsin, Alabama and Oregon to claim the first College Football Playoff National Championship.

“There’s chaos in every program,” says the 51-year-old Meyer, who was born in Toledo and grew up in Ashtabula. “Ohio State is probably the hardest program in America. You’re expected to win every game you play. You have to embrace it.”

As the Buckeyes prepare for their Sept. 7 grudge match at Virginia Tech, we talk with Meyer about Ohio high school football, motivation and his expectations for the 2015 season.

Ohio State was an underdog against both Alabama and Oregon last season. What turned a talented team into a championship team?
The culture and living the program. Some coaches take over jobs and complain about the talent they have. That’s a doomed program. Everybody has talent. The difference is the culture within the program and the leaders that drive that culture. Did we use “us against the world” last year? Sure. Was it our sole form of motivation? No. As coaches we want our players to play greater than themselves.

You are favored to win the national title again. How are you dealing with the expectations?
We don’t talk about [a national title] at all. We break our team up into nine units. Our objective is to go into each game with all nine units playing at maximum capacity.