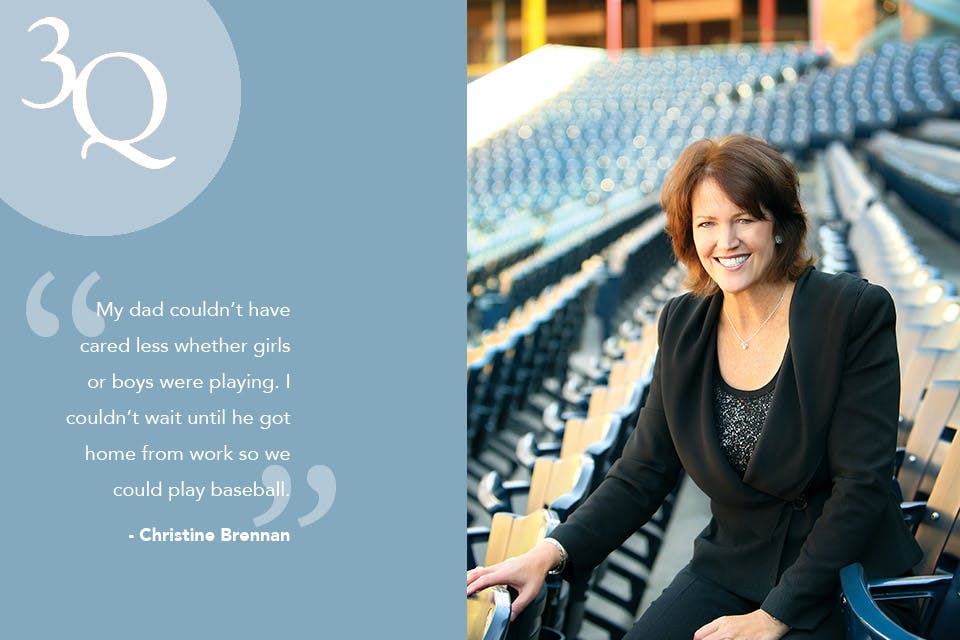 The Toledo native, USA Today columnist and Red Smith Award honoree talks about her father’s influence, the importance of Title IX and the future of sports.

Growing up, Saturday nights held a special appeal for Christine Brennan, who was immediately drawn to the sights and sounds of college football.

“I remember seeing a glow in the sky and asking my father what it was,” recalls Brennan, who lived in Toledo’s Old Orchard neighborhood. “We would walk across Bancroft Street to the Glass Bowl and watch Toledo football games.”

Later, after moving to Ottawa Hills, Jim Brennan and his daughter would go on to cheer Toledo’s Chuck Ealey-led teams that went unbeaten during the 1969 through 1971 seasons. They also traveled to Ann Arbor, Michigan, to witness one of the biggest upsets in college football history: Michigan’s shocking 24-12 win over top-ranked Ohio State in 1969.

Often picked first for games with the neighborhood boys, Brennan went on to earn letters in tennis, field hockey, volleyball, basketball, softball and track at Ottawa Hills High School. Drawn to writing, she graduated from Northwestern University and became the Miami Herald’s first full-time female sports reporter before moving to The Washington Post and her current role as sports columnist for USA Today. In March, Brennan received the coveted Red Smith Award, joining the ranks of legends such as Jim Murray and Dan Jenkins. A longtime advocate for women’s sports, Brennan talked with us about her father’s guidance, the impact of Title IX and the future of sports in the COVID-19 era.

Your book Best Seat in the House: A Father, a Daughter, a Journey Through Sports chronicles your father’s influence. What did you learn from him?
My friends had parents who told their daughters they couldn’t play sports. That is what we were telling girls a generation and a half ago. My dad couldn’t have cared less whether girls or boys were playing. I couldn’t wait until he got home from work so we could play baseball.

The enactment of Title IX in 1972 was a watershed moment for women’s athletics. How did it change the landscape?
I think Title IX is the most important law in our country over the last 50 years. If you were driving through a neighborhood in Ohio in the 1960s and you saw a girl on a ballfield you would have thought she had run over to tell her brother it was time for dinner. It has dramatically changed the way we think about girls and women in sports.

You broke the story of the postponement of the 2020 Tokyo Summer Olympics. What is the new normal for sports?
I’ll cover the Olympics whenever they are held. The commissioners and owners in professional sports are not in charge right now — the mayors and governors are. I think it’s very healthy to want sports back, but I have no idea what’s going to happen. We should all get used to the term spectatorless games.