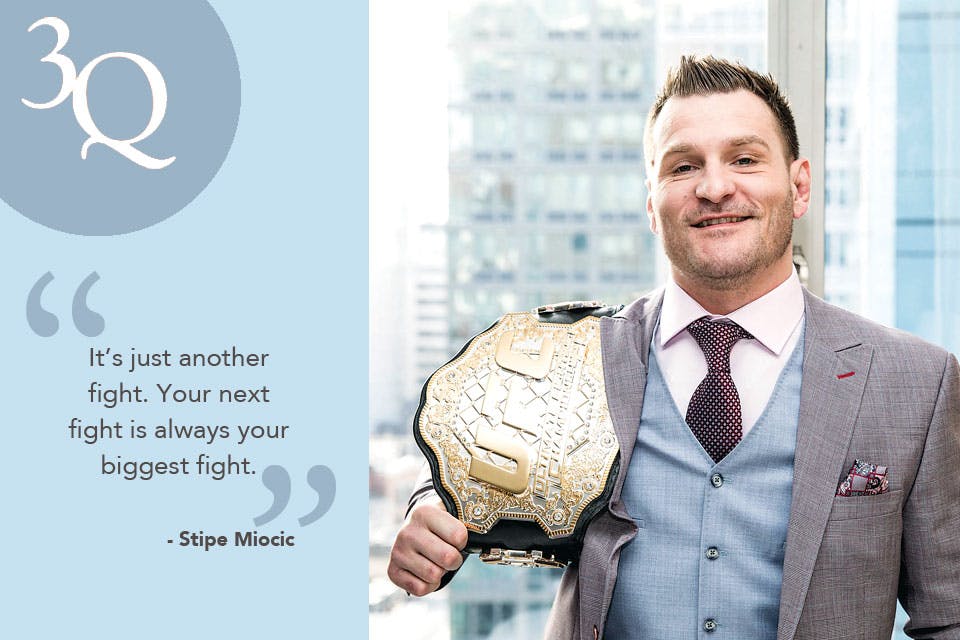 The Ohioan and reigning UFC heavyweight champion talks with us about honing his craft and defending his title.

July 2018
BY Barry Goodrich | Photo by Will Fox/Fox Identity

July 2018
BY Barry Goodrich | Photo by Will Fox/Fox Identity

Stipe Miocic’s first fight did not end well. While enjoying a day at Euclid’s Roosevelt Pool, a 10-year-old Miocic was engaging in what he thought was some innocent horseplay.

“I splashed water on a kid and he didn’t take too kindly to it,” Miocic recalls with a laugh. “I was just joking around, but he beat me up pretty good. It was my first fight and my last fight, too. I felt terrible about it.”

Miocic, a former Cleveland Golden Gloves boxing champion, began his mixed martial arts career by winning his first six fights by knockout before entering the UFC. After a motivating 2014 loss, he went on to knock out every UFC heavyweight fighter and earned the title of heavyweight champion in a 2016 win against Fabricio Werdum.

“I’m a very competitive person,” says Miocic, who is a part-time fireman and EMT in northeast Ohio’s Oakwood and Valley View communities. “Boxing really helped me with my [punching] and my confidence. Wrestling taught me toughness, and football helped me with my footing.”

Miocic, the son of Croatian immigrants, talked with us about surviving The Octagon, the Cormier fight and how he handles pressure.

You have won fights in seconds and showed stamina in longer bouts. How important is it to be able to adjust your approach to an opponent?
A [UFC] fight can totally change quickly. It’s like figuring out a puzzle and doing things someone is not expecting. You always have to know what to do at certain times. My biggest strength is my ability to listen to my coaches. The more I’ve trained, the more my confidence has improved. You are learning something new every day in this sport.

Your championship fight with Daniel Cormier has received a lot of hype over the past few months. What is your mindset as you prepare for it?
It’s just another fight. Your next fight is always your biggest fight. You take a different approach for each one. Not every guy has the same style. I’m going to have to keep my distance and make sure I don’t get hit early.

You are a huge fan of Cleveland sports teams. Do you identify with their underdog mentality even as a champion?
Oh yeah. Everything is earned here. There’s always pressure … there’s nothing you can do about it. I’ve worked way too hard and sacrificed too much to give up this belt.