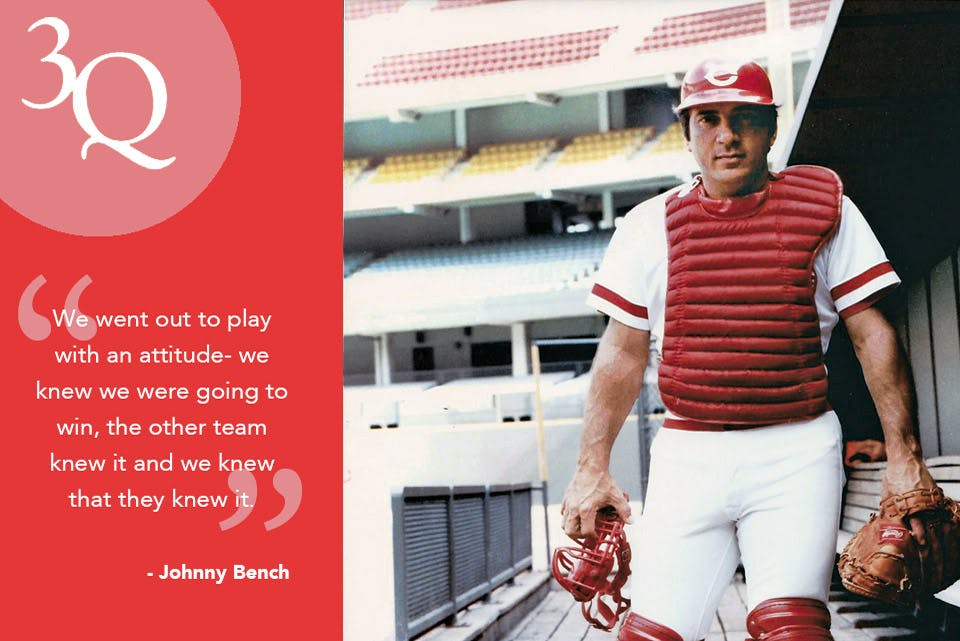 We talk baseball with the Reds legend and Hall of Fame catcher.

Johnny Bench was the player who kept The Big Red Machine well oiled. The 14-time All-Star catcher and two-time National League Most Valuable Player was a key component of the Cincinnati Reds teams that won four pennants and two World Series in the 1970s.

“They still talk about the 1927 Yankees, but people that follow baseball know where we stand,” says the 67-year-old Bench from his home in Florida. “I go all over the country, and people come up to me and name our starting lineups. They can’t talk to Babe Ruth or Ty Cobb, but they can talk to me.”

Bench, who will return to Cincinnati for this month’s Major League Baseball All-Star Game on July 14, talked with us about his All-Star experiences, the Reds’ glory days and his love of the game.

You played in several All-Star Games with some of the most noted players in baseball history. Which games stand out for you?
I was Rookie of the Year in 1968 but was named as the alternate catcher for the game. I was 20 years old, sitting in the locker room at the Houston Astrodome, just looking around. Willie Mays was sitting across from me. He got up, walked over to me and said, “You should have been the starting catcher.” The next year we played in Washington and in my first at-bat I hit a homer off of Mel Stottlemyre. In that same game [Carl] Yastrzemski robbed me of another homer.

You played alongside such greats such as Pete Rose, Joe Morgan and Tony Perez in the 1970s. What made those Reds teams so special?
We were very aware of what kind of team we had. All you had to do was look around the locker room. We went out to play with an attitude — we knew we were going to win, the other team knew it and we knew that they knew it. Sparky Anderson was one of the greatest managers ever, because he knew how to put the right players in the right spots. And we could have adjusted to any era. It’s a round ball and a round bat and you hit it square.

Your highest single-season salary was $900,000. Today’s average player salary is $4 million. How has this changed the game?
Today’s players are more worried about where they are going to invest their $100 million. We have a different view of the game now, because we’re inundated by sports 24/7. Fans go to games to vent. People remember our [Reds] teams because of the way we represented the game. Baseball was pure for us. It still is for me.

For more information about the 2015 All-Star Game, visit mlb.com/allstar.