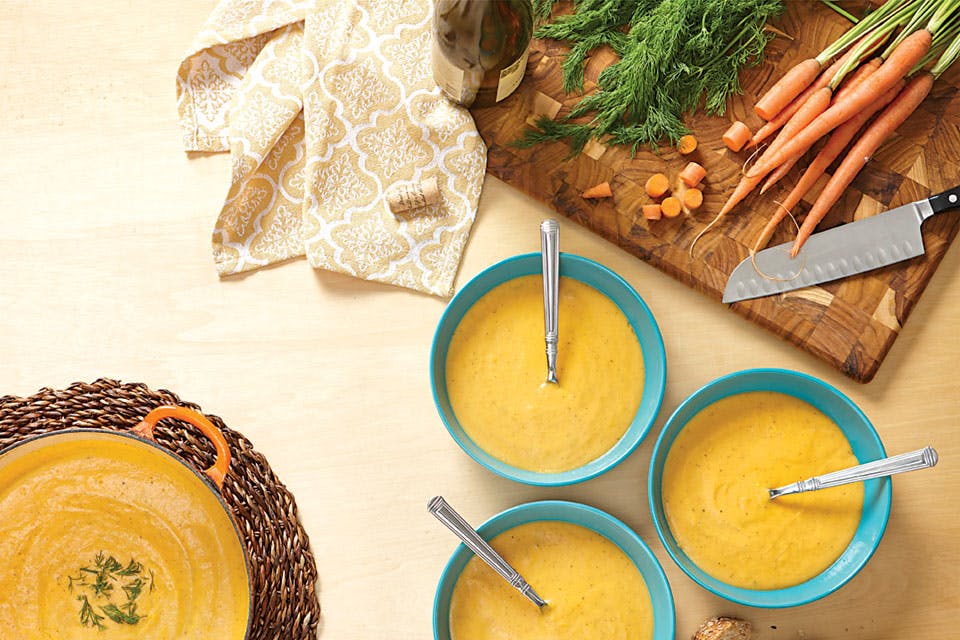 Broths, bisques and chowders should be on your stove this time of year. Start with these recipes from Ohio spots that do it right.

Don’t get us wrong. Mom’s chicken noodle soup will forever hold a place in our hearts. But with plenty of snowy days ahead, we’ll be tired of those old standbys by first thaw. Besides, it’s easy to get creative with a bubbling pot of stock. Once you have a base, you can be as inventive as the ingredients in your kitchen allow. You like tomatoes? Throw them in. Want it hot? Add curry powder. We asked three Ohioans who make soup their daily dish how they like to liven up the winter favorite and asked each to share a recipe of their own.

When Kevin Ciferno faced the loss of his gas company job nine years ago, he began looking for a venture he could run by himself. “I had been dabbling in trying to start a business for a while,” recalls the co-owner and chef at The Soup Loft in Granville.

Ciferno decided on soup not only because he could make it ahead in large batches, but also because his wife, Denise, had spent a year between teaching jobs making soup for a coffee shop in town, and he knew she could teach him all he needed to know to get started. “It was sort of like bringing the soups back to Granville,” Ciferno says.

Located in a 350-square-foot, second-floor space in downtown Granville, the shop serves a menu of up to seven soups each day. It keeps Ciferno busy pureeing ingredients and simmering fresh batches. That is, of course, after consulting with his wife. “She scours over recipes,” he says. “She’ll change ingredients and adapt them to her taste.”

One of the results of their collaborative style was The Soup Loft’s Creamy Carrot Bisque. “As you taste it you get the feeling that it is fresh from the garden,” says Ciferno, adding that vegetables can sometimes be temperamental when it comes to balancing flavors. “Based on the sweetness of the carrots, you may need a little more cream cheese or a little less.”

That level of attentiveness has created a legion of loyal customers. “When I leave for the day, I stock a grab-and-go cooler,” Ciferno says. “The locals know to come in and just self-serve, leaving their money on the honor system.” 138 Broadway E., Granville 43023, 740/587-1284, facebook.com/soup.loft

DIRECTIONS
Heat olive oil in a large skillet over medium heat. Add in onion and celery, season with salt and pepper and saute until vegetables are translucent. Stir in potatoes and carrots and continue to saute for another 3–4 minutes. Add broth and bay leaf and bring to a boil. Reduce the heat to medium-low and simmer potatoes and carrots until soft. Add wine and simmer for another 5 minutes. Remove soup from heat. Remove bay leaf and discard. Add in cream cheese and blend. Stir in fresh dill and season to taste with salt and pepper. Garnish with a sprig of dill.  Yield: Serves 8 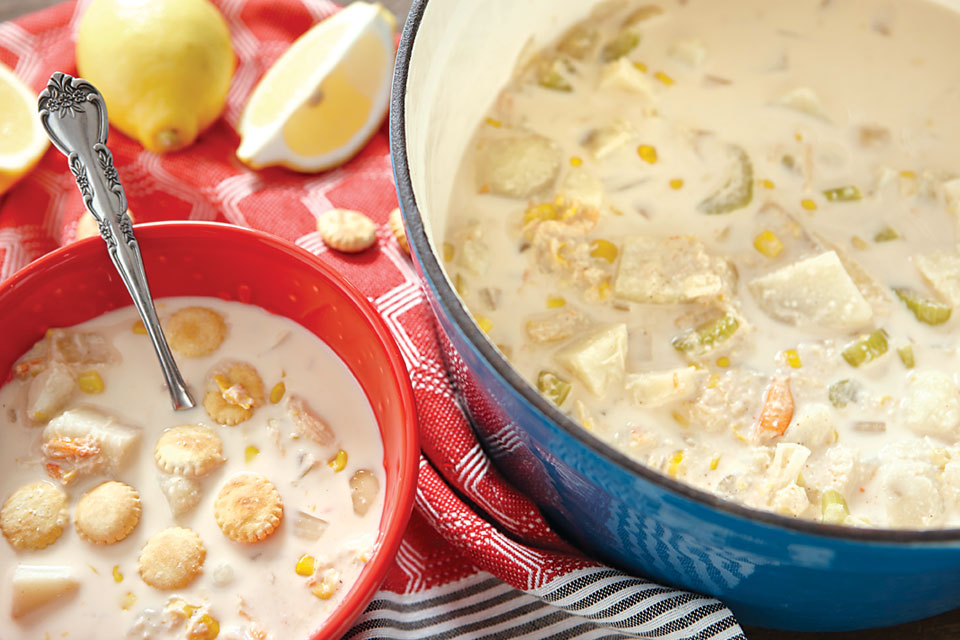 Susan Vander Maas likes her customers to get creative. The co-owner of Doc’s Deli in Mansfield offers more than 100 fresh ingredients on her sandwich and salad line. So far, they’ve inspired hundreds of customer-created sandwiches that are stored in the deli’s computer register and available for order.

“The whole premise of the restaurant is to create and name your own sandwich and then every time you come back you can get the sandwich that you created,” Vander Maas explains.

There are four daily kettles of soups, most of which are Vander Maas’ creations. In the Kickin’ Crab Chowder, offered every Tuesday, she keeps it rich but cuts fat with a switch from heavy cream to half-and-half.

“You are replacing half of the fat content,” says Vander Maas of the simple variation. “We like to offer healthy choices for people to combat all the fast food … I like the fact that you can make a healthy soup but it is still satisfying.”

Swapping the traditional clam for crabmeat offers a revision that helps this thinner chowder maintain a luscious feel. “The chunks of crab are obvious and you get a softer texture than with the clam,” says Vander Maas.

The end result is a sumptuously sweet soup with an unexpected finish. “It’s a mild-tasting soup,” says Vander Maas. “But then you get a nice little punch from the cayenne pepper.” 424 Glessner Ave., Mansfield 44903, 419/775-7775, docsdelimansfield.com

DIRECTIONS
In a large pot bring 4 cups of water to a boil. Add in potatoes, celery and onion along with chicken base. Reduce heat to medium-high and cook until potatoes can be easily pierced with a knife. Reduce heat to medium and whisk in milk and half-and-half. Add in crabmeat and corn, then season with cayenne, black pepper and paprika.  Yield: Serves 8 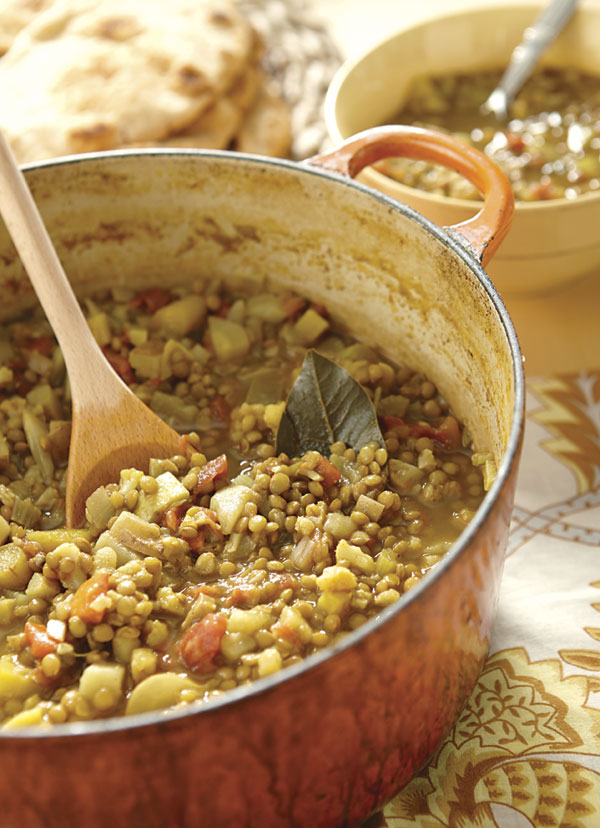 Alisa McPheron knows there are two types of customers in the diner world: Those who trend toward tried-and-true tastes and those who are always ready for a food adventure. The co-owner of Lima’s 1950s-style Fat Cat Diner happily caters to both crowds. “The simplest thing we serve here is chicken fingers,” McPheron says with a laugh, “because you have to.”

If the lunchtime crowd is any indication, the regulars appreciate the approach, and her soups are a popular choice among those looking for a sensible midday meal.

“There is a judge who comes in five times a week and always gets just a bowl of soup,” she says. “You don’t have to go back [to the office] and fall asleep. It’ll just be enough to fill you up.”

McPheron walks a line that plays to foodies and traditionalists alike when it comes to her soups. She knows to keep the recognizable around, such as the diner’s stuffed pepper variety. But she’s all for mixing it up too, especially when it comes to her Curried Vegetable and Lentil Soup. “I put potatoes in because I like potatoes with my lentils,” McPheron says. “Sometimes I do mushrooms if I have them.”

She adds that the dish can also be dressed up for dinner. “If you let it really cook down, it gets a little thicker, and then it is great served over basmati rice with a little side of naan bread for a hearty vegetarian meal.” 312 N. Main St., Lima 45801, 419/879-1277, fatcatdiner

DIRECTIONS
In a large stockpot heat the olive oil over medium-high heat. Add the onions, celery and carrots. Cook until the onions begin to soften. Add the bay leaves, zucchini, summer squash, red pepper and mushrooms. Cook, stirring often for 5–8 minutes. Add the garlic, curry powder and cumin. Stir, then add the cauliflower and red potatoes. Add the vegetable stock, lentils and diced tomatoes. Bring to a boil and reduce to a simmer. Simmer for 35–45 minutes until the lentils and potatoes are tender. Add the cayenne pepper. Adjust the seasoning and serve with warm bread. Yield: Serves 8