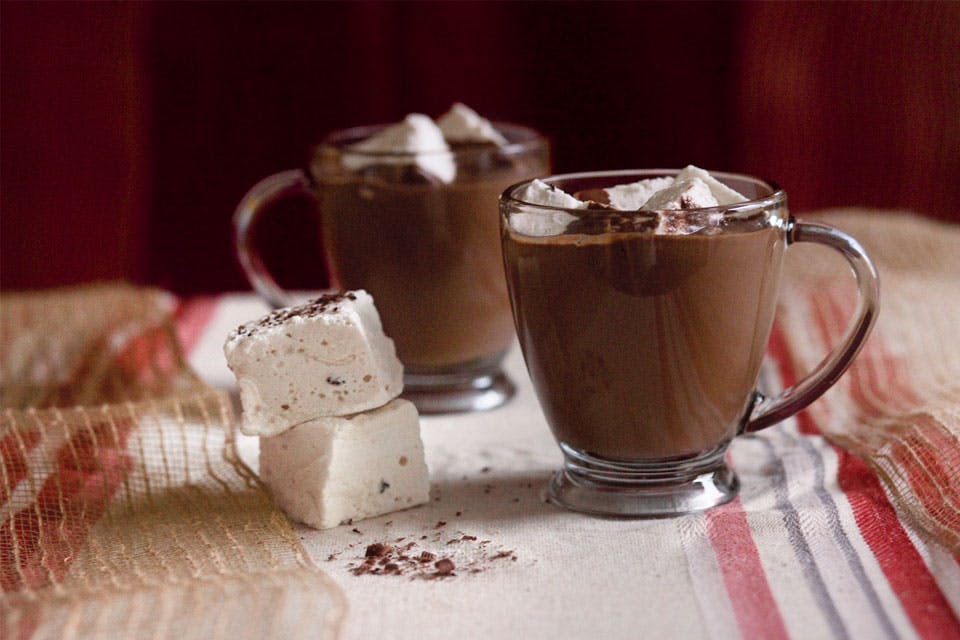 Orchids at Palm Court pastry chef Megan Ketover shares how to go (way) beyond the packet of Swiss Miss.


When bold, dark chocolate melts into vanilla bean-steeped milk and cream, the result isn’t just hot cocoa — it’s dessert. Poured into a mug and topped with homemade marshmallows, it’s a decadent departure from the familiar powdered versions of the drink but nearly as easy to mix up.

Once you’ve selected your chocolate — Ketover favors the Caraibe Noir bar by Valrhona — it’s as simple as melting chocolate into hot milk. Even the from-scratch marshmallows that she tops the brew with can be made at home, and Ketover says they’re a great place to add your own personal touch to the drink.

“[You] could stuff them with chunks of candied ginger or add in some cocoa nibs … kind of like a chocolate chip marshmallow.”

DIRECTIONS
Heat the corn syrup in a microwave until warm to touch. In a separate bowl, bloom gelatin with the cold water. Once set, add gelatin to the corn syrup until dissolved.

In a sauce pot, combine the honey, sugar, water and lemon juice. Stir until just dissolved. Bring to a boil, then cook to 243 F (using a candy thermometer).

Pour dissolved gelatin into a mixing bowl. With a hand or stand mixer on low, slowly add the hot sugar syrup to the gelatin. Turn mixer to high, and whip mixture until light, fluffy and room temperature — about 15 to 20 minutes.

Using a spoon, fold in the white chocolate and cocoa nibs. Press mixture into a greased 13-by-9-inch pan lined with greased parchment paper. Allow to cool overnight. Cut with scissors or a paring knife into desired size and dust marshmallows with powdered sugar. Yield: Makes about 40 marshmallows. The recipe can be halved, but should not be made in any smaller quantity.