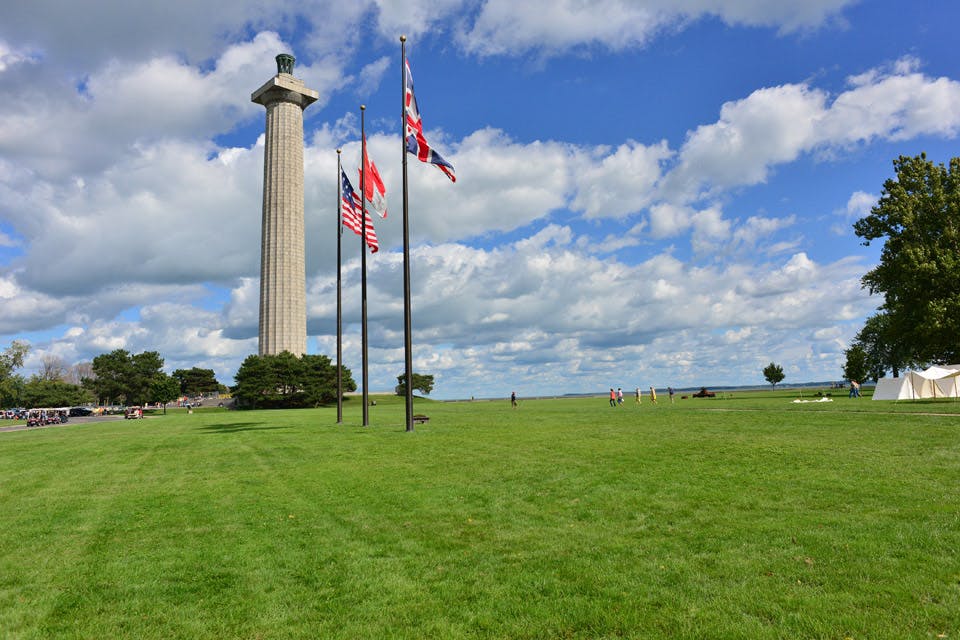 On a clear day at the top of Perry’s Victory and International Peace Memorial, you can see each of the Lake Erie Islands, including the ones in nearby Canada. The observation deck is too high to hear noise from the streets of Put-in-Bay below, and the tourists seem to move in silence. Lake Erie appears even more massive from this height. It is peaceful and impressive.

Not far from here on a September day in 1813, Commodore Oliver Hazard Perry led the United States to one of the most pivotal victories in the War of 1812: the Battle of Lake Erie. After the battle, which gave the United States control of the strategically important waters of Lake Erie, Perry wrote the famous words, “We have met the enemy and they are ours” to Gen. William Henry Harrison

The monument that commemorates that accomplishment was built between 1912 and 1915 to both honor Perry’s achievement and celebrate the lasting peace between the United States, Great Britain and Canada. American and British soldiers are buried beneath the monument’s marble floor, and visitors can pay their respects before ascending the structure.

The 352-foot Doric column is the third-tallest monument in the National Park Service (only the Washington Monument and the Gateway Arch in St. Louis are taller) and the most iconic feature of South Bass Island.

“Having this massive structure roughly 30 floors tall out here ... where everything is flat with the water, you can see it from miles away,” says park ranger Robert Whitman.

The monument is the biggest attraction on the island, according to Maggie Beckford, the recently retired director of the Put-in-Bay Chamber of Commerce. She will be working as a park ranger at the site this summer.

“It’s very popular for how small the park is, and it’s on an island,” Beckford says.

In 2015, more than 150,000 people went to the top of the monument, and that count doesn’t include those who just stopped at the visitor center or took park in one of the interpretive programs held at the 25-acre site. High attendance numbers are expected at the monument this year, given the National Park Service centennial.

It may also be your last chance to visit the observation deck for a while. It will likely be closed in 2017 (the visitor center will remain open) so the park service can make additional repairs to the memorial. The monument was previously closed for nearly three years between 2009 and 2012 for $7 million worth of renovations.

“There’s only a handful of War of 1812 sites. Each time period is slightly different,” says Whitman, who takes part in the re-enactments staged at the memorial. “We show the steps of what they would have done firing arms, in particular the army on land, how they would have done things, just so people can experience it.”