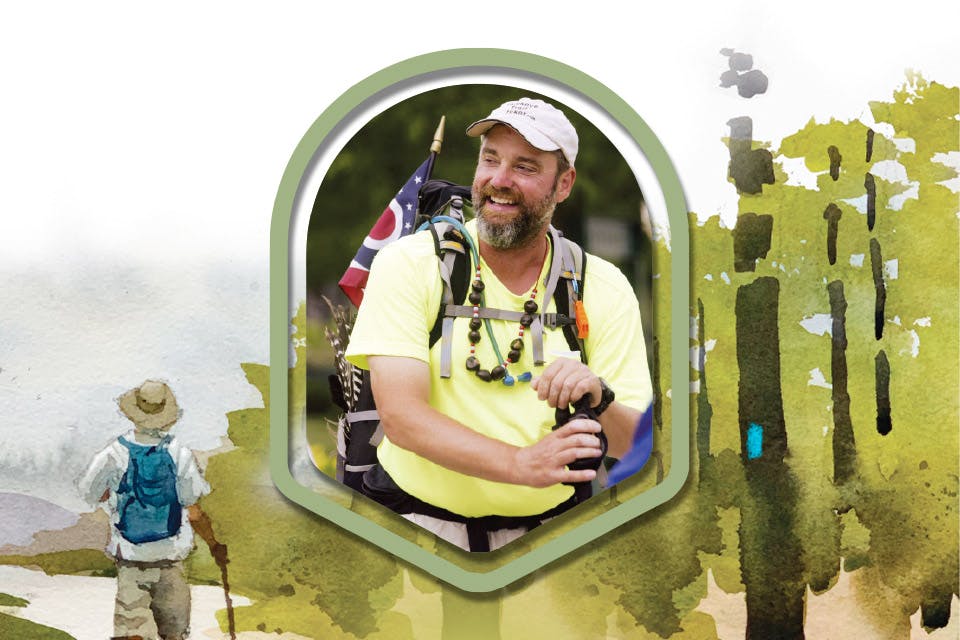 In 2011, outdoorsman Andy Niekamp set out to tackle the Buckeye Trail. Nearly 90 days later, he became the first person to complete the route’s 1,444 miles by himself.

When Andy Niekamp set out for a thru-hike of the Buckeye Trail on the first day of spring in 2011, he wasn’t sure if he would hike for three days or three months. The founder of Dayton Hikers, a group that boasts around 7,000 members, was fresh off his third trip section-hiking the Appalachian Trail and looking for a new adventure close to home.

“I had a pretty low expectation of what the hike on the Buckeye Trail would be and my motto was that I was going to hike for as long as it was fun,” he says. “Lo and behold, 88 days later I circled through Ohio and hiked back into Dayton.”

Since he could not find a hiking buddy for the trip, Niekamp became the first person to thru-hike all 1,444 miles of the Buckeye Trail by himself. Equipped with a backpack full of 20 pounds of gear, Niekamp says he continued hiking because of the natural beauty he saw while following the blue blazes that mark the trail and the overwhelming hospitality of the Ohioans he met along the way.

“I had to constantly pinch myself that I was still in Ohio,” he recalls. “Its beauty really exceeded what I thought it might be. And I was really floored by the generosity of people that would meet a stranger and offer water or whatever food they had.”

The former IT professional had worked for Hewlett-Packard for 26 years. When his position was cut in 2010, he filled his newfound free time with long-distance hiking. Shortly after returning from his nearly three months on the Buckeye Trail, he founded Outdoor Adventure Connection, which leads educational programs for nature newbies and guides backpacking trips, all in the name of sharing a love of the outdoors with others.

“We’re in this connected world, where we’re always online or staring at a screen of some sort,” says Niekamp. “When you get out in nature, you’re leaving that behind and you’re unplugging. There are therapeutic benefits to being in nature: Your blood pressure decreases, it’s healthy to be outside.”

Niekamp, known on the trail as Captain Blue, later wrote about his Buckeye Trail experience in his book, Captain Blue on the Blue Blazes, which was published in 2017. He logs about 1,000 miles a year hiking and is currently completing his fifth section-hike of the Appalachian Trail, a feat few people have done. But he’s never forgotten the trek on the Buckeye Trail that opened his eyes to the beauty and history right in his backyard.

“The Buckeye Trail is about discovering Ohio,” he says. “It’s about the present, but it’s also so much about the past; the rich history that Ohio has. We don’t necessarily have to travel out of state to see beautiful sights. We have these beautiful sights right here in Ohio.”