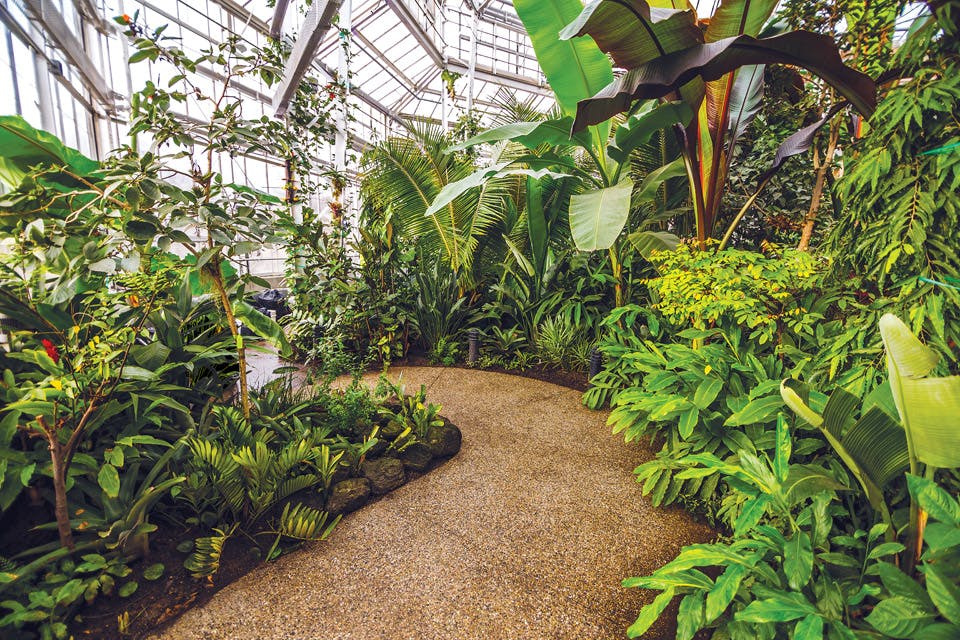 For a generation now, visitors to the Toledo Zoo & Aquarium have only known its Museum of Science as a shadow of its former self. Constructed as a New Deal project — one of several built at the Toledo Zoo — by the Works Progress Administration in 1936 and 1937, the 60,000-square-foot facility had recently been used mostly for offices, with about 10,000 square feet devoted to Amazing Amphibians and the Crawlspace exhibit focusing on insects and invertebrates.

Soon, zoo visitors will get to the see the building’s splendor following a $27 million restoration and reopening as the ProMedica Museum of Natural History at the Toledo Zoo, a concept that dates back five years, according to Jennifer Van Horn, the zoo’s vice president for construction and planning.

“We knew we wanted it returned back to being a museum,” she says. “We needed to highlight Ohio’s biodiversity.”

The new museum will house a cafe, gift shop and great hall available for rent with capacity for up to 200 people. But the most exciting part, Van Horn says, is the exhibits, which will include two greenhouses — one a 47-foot, two-story tropical space with exhibits on butterflies and orchids and the other a prairie greenhouse.

Another exhibit will detail the origins of Ohio, starting about 13,000 years ago when the glaciers created the Great Lakes, and will include life-size models of animals from that era, such as mammoths, mastodons and saber-toothed cats. The building will also have an oak forest model — 24 times larger than actual size — as well as rooms that show the importance of rivers, streams and wetlands.

The top floor of the museum will feature a hands-on exhibit titled “Nature in Hand,” a venom and invertebrates exhibit and an animal-themed artwork display in cooperation with the University of Findlay’s Mazza Museum, which celebrates the art of picture books. 2 Hippo Way, Toledo 43609, 419/385-5721, toledozoo.org 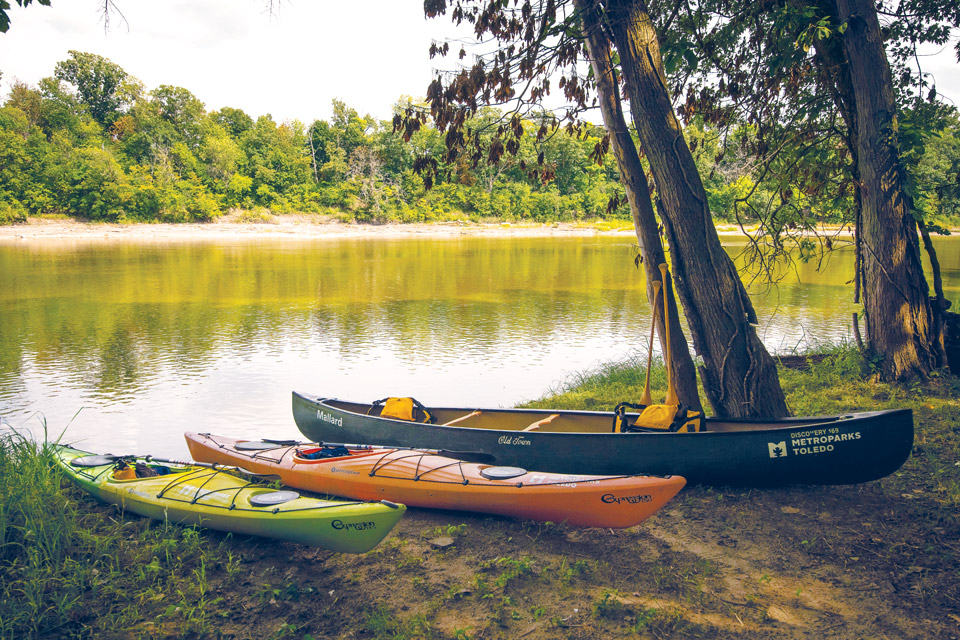 The Ohio Department of Natural Resources designates 11 bodies of water across the state as official water trails. The most recent addition to that list is the Maumee River, which stretches about 100 miles from the Indiana border near Defiance up to Maumee Bay.

The Maumee River’s water trail designation was unveiled in 2018 and involved cooperation between ODNR, Metroparks Toledo and the Defiance Soil and Water District. The trail is detailed on maps and brochures as well as signs — lots and lots of signs. Those in parks along the trail point travelers to where they can access the river, and signs along the route tell those on the water where they’re headed and detail hazards along the way.

“When you get in the river and you’re canoeing or kayaking, you’ll know where the next access point is,” explains Tom Arbour, ODNR’s trails coordinator. “By far, the Maumee River has the best wayfinding signage in the state. Metroparks Toledo really had a vision. They did a lot of research, and we helped fund the improvements.”

If you’re more interested in staying on land, there are plenty of hiking and biking trails in the region, with the Wabash Cannonball Trail being one of the most prominent. At one point, Toledo was one of the busiest railroad hubs in the United States. The Wabash Railroad ran throughout northwest Ohio, and the Cannonball was one of its fastest passenger trains (it even inspired a folk song).

The former railroad rights-of-way were turned into a 63-mile trail that now stretches throughout northwest Ohio, beginning in Maumee not far from Fallen Timbers, the site of a 1794 battle and now part of Metroparks Toledo. For more information about the Maumee River Water Trail, visit metroparkstoledo.com. For more information about the Wabash Cannonball Trail, visit wabashcannonballtrail.org. 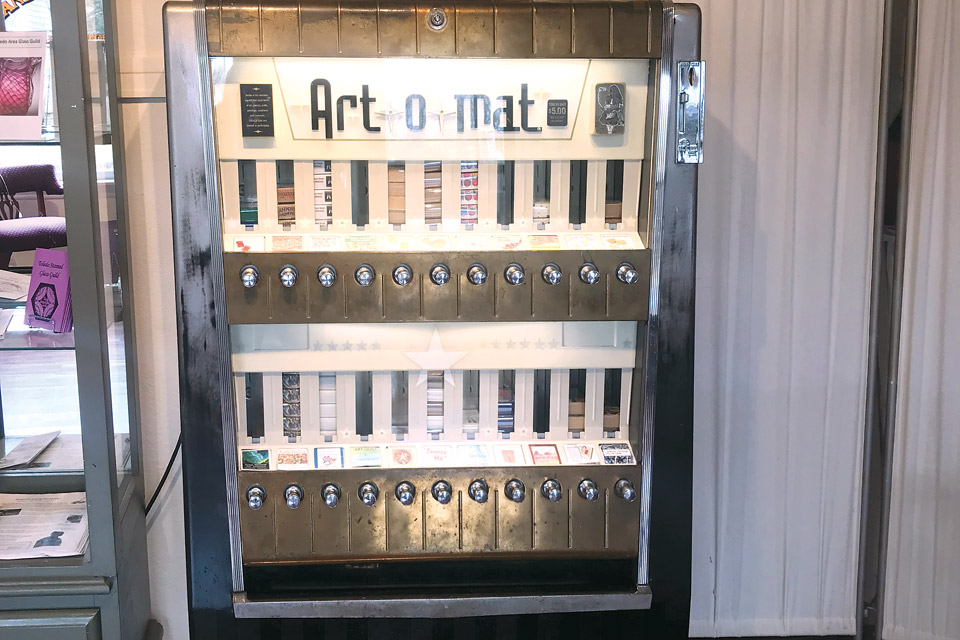 In 1964, 20 acres of land were deeded to the city of Toledo to form a public park. From that donation came the Toledo Botanical Garden, now part of Metroparks Toledo. During the decade that followed, the garden purchased a neighborhood of homes on nearby Olimphia Road, which became the Artist Village at Toledo Botanical Garden, a series of studios for artists doing glassblowing, pottery, fiber arts and more.

The Artist Village also includes space used by the Toledo Potter’s Guild, Toledo Artists’ Club and Unruly Art, a gallery and studio for adults with developmental disabilities. There’s also an Art-o-mat, a reconditioned cigarette vending machine that now sells small works of art. It is one of only two in the state of Ohio.

“People come just for the machine,” says Kelly Savino, who has it at her Hands On Studio in the village.

Visitors should be aware that studios in the Artist Village may not always be open or the artists who occupy them may be doing the more mundane parts of their work.

Those days, you’ll find many artists in their cottages, offering demonstrations and some items for sale. There are also annual events, including a huge plant and pottery sale on Mother’s Day weekend to coincide with National Public Garden Day. Art in the Garden (a festival scheduled this year for Aug. 10 and 11) features buskers, demonstrations, food trucks and hands-on exhibits. Two galleries and all of the studios are also open for Heralding the Holidays, which is held each December and gives shoppers the chance to create their own glass ornament. 5403 Elmer Dr., Toledo 43615, 419/351-5707, artvillage419.org