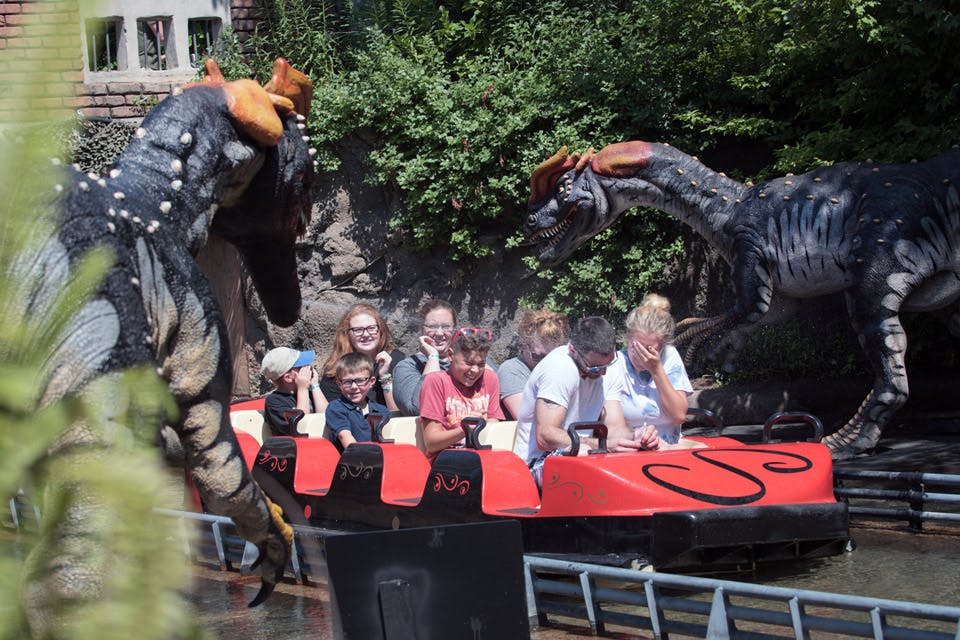 Our capital city is a prime destination for fun this season, with favorite attractions adding new reasons to visit.

Guests at the Columbus Zoo and Aquarium can be forgiven for believing dinosaurs have returned from extinction. Soon, a towering figure with feathers, a long beak and even longer neck will stand near the entrance to the celebrated Columbus landmark hovering over her recently hatched babies.

Although the creature resembles a giant stork, she’s actually Quetzalcoatlus, a flying dino from more than 65 million years ago and one of the largest flying animals to have ever lived. The statue is scheduled to be in place by Memorial Day as will 30 new animatronic dinosaurs that move, blink, vocalize and even spray water on passersby at the zoo’s popular Dinosaur Island attraction.

“We’ve swapped out the dinosaurs on Dinosaur Island from previous years with new ones so people who’ve visited there in the past can come back and have a novel experience,” says Tom Stalf, zoo president and CEO. “Who doesn’t love dinosaurs?”

Of course, it’s the living animals that are still the star attractions. Just as the twin polar bear cubs were popular draws during past seasons, this year’s “zoo borns” include five Asian small-clawed otter pups; a Humboldt penguin chick; and a silver-leaf langur, an Asian monkey that’s easy to spot because of its orange color when it’s very young.

A new show, “Surfin’ Safari,” features rescue cats and dogs alongside leaping lemurs and cavorting kangaroos, all aimed at getting guests to consider adopting animals from shelters.

Popular family programming from past years will continue, including opportunities to attend a day camp at the zoo or go behind the scenes at the Giraffe Barn, Manatee Coast, Discovery Reef or Animal Health Center.

One of Stalf’s favorite activities is the Sunrise on the Savanna breakfast, which takes place in the Heart of Africa area of the park and lets guests enjoy an early repast with an amazing view.

“You get to see lions walk right up to the window and watch you, and you’ll be the first to see the giraffes stride out into the savanna in the morning,” Stalf says.

Opening in late May, the new Up Close Savanna Tours will transport guests in a Range Rover onto the savanna among grazing gazelles and zebras.

Over at Zoombezi Bay, the popular 22-acre water park attached to the zoo, Otter Banks will be the new attraction joining Baboon Lagoon, Croctail Creek and the Roaring Rapids Action River.

Opening in early summer, Otter Banks’ principal features will include an activity pool with basketball hoops and slides with 6-foot drop-offs. “American Ninja Warriors of all ages will also enjoy the obstacle course at Otter Banks,” Stalf says. Actual otters won’t be sliding with you, but you’ll be able to frolic just like one. 4850 W. Powell Rd., Powell 43065, 614/645-3400, columbuszoo.org 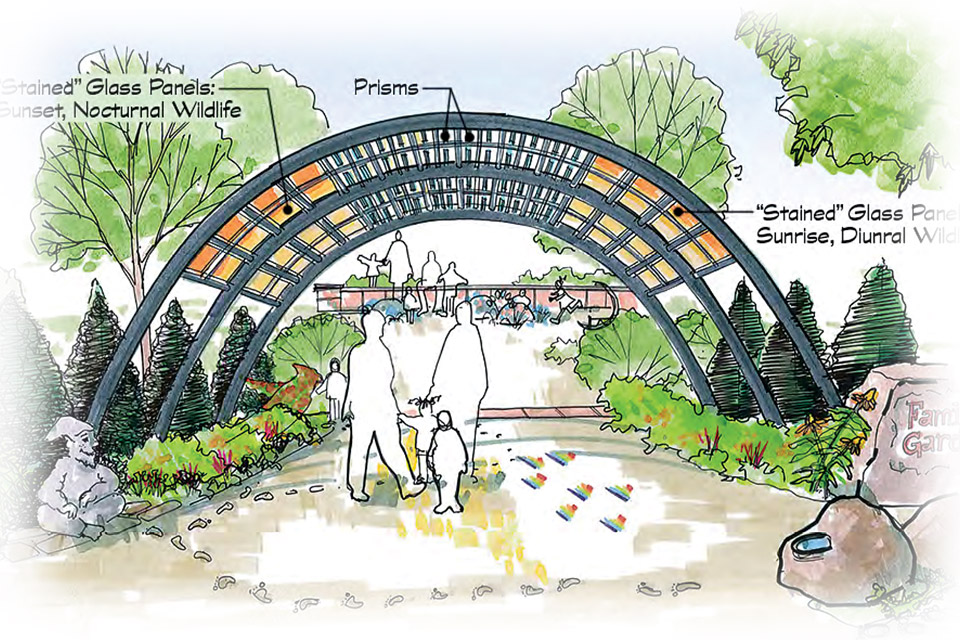 When it came to designing a new children’s garden, Franklin Park Conservatory and Botanical Gardens went straight to the experts for advice. Nearly 200 kids, ages 2 through 10, weighed in with suggestions on what they’d most like to see in the new space: rainbows, lots of trees, and places to climb and wade.

“The children spoke, and we listened,” says Bruce Harkey, the conservatory’s president and CEO. “We told our designers we wanted the best children’s garden in the country, and we’re confident they’ve achieved just that. Ours will be the new benchmark for children’s gardens of the future.”

For the climbing activities they requested, kids can scramble over a pile of small boulders on their way to a Canopy Walk, where a rope bridge leads to two treetop roosts: Mulberry Perch, shaped like a giant bird’s nest and roomy enough to accommodate a dozen children and adults, and a huge hammock where families can kick back and study the sky.

For the garden’s water elements, designers devised a cascade that creates a shallow creek ideal for wading, as well as a Wetland Explore area that fills with rainwater following summer showers. The new additions complement the property’s more than 100 mature trees, including the huge mulberry supporting the Canopy Walk.

Ohio’s diverse landscape will be celebrated in My Ohio Woods, which replicates the towering bluffs and vegetation of the Hocking Hills. More than 19,000 mostly native plants have been added to the site, with tracks of deer, raccoons and skunks embedded in the ground and sidewalks. Whimsical gnomes hide behind indigenous shrubs, and there’s even a colorful mosaic of the spotted salamander, Ohio’s state amphibian.

A Learning Pavilion offers daily nature-based educational programming, and children are invited to plant or tend to vegetables and flowers on adjoining garden plots. 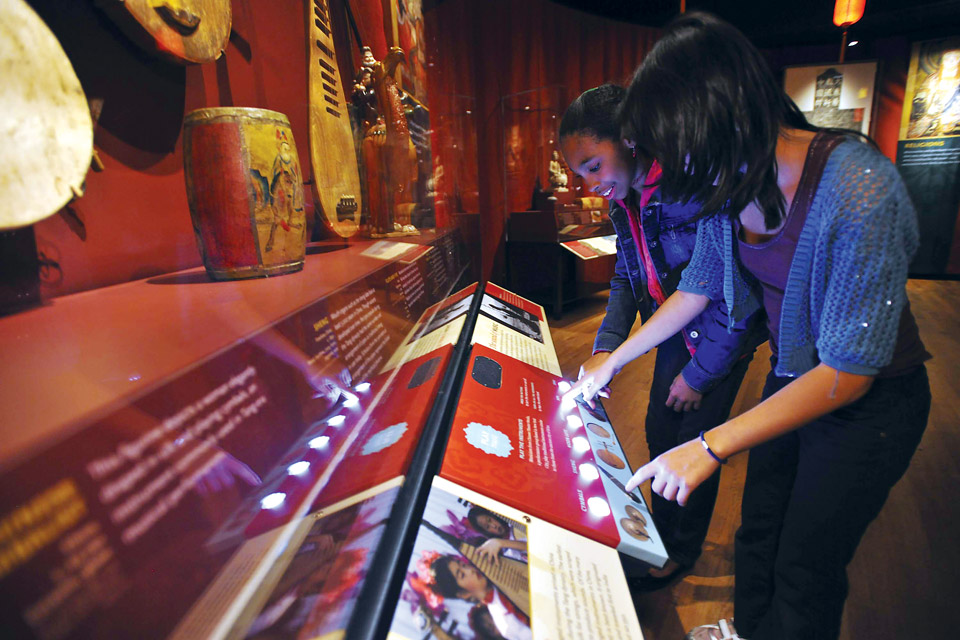 Visitors to Columbus’ Center of Science and Industry can travel to ancient lands thanks to two exhibits presented in collaboration with New York’s American Museum of Natural History.

“The American Museum of Natural History is huge — it’s one of the largest in the world,” says COSI’s president and CEO Frederic Bertley. “They could have picked any city and any museum for their first long-term collaboration, but they picked Columbus, and they picked COSI.”

COSI’s permanent Dinosaur Gallery, which opened in November 2017, features life-size models and casts of dinosaur skeletons in a variety of visually arresting displays. There’s a 6-foot-long model of a T. rex skeleton mechanically walking in place and a 23-foot-long Yutyrannus covered in what appear to be porcupine quills, but which actually replicate an early form of the feathers scientists now believe were prominent features on most dinosaurs.

Other surprises abound, like the fact that “Jurassic Park” got it wrong: Velociraptors weren’t nearly as big as the film depicts, and the T. rex couldn’t possibly have run that fast. And all those unusual horns, frills, crests and domes on dinosaurs’ heads? Most paleontologists concur their function was to attract mates, not serve as defense against predators.

“Traveling the Silk Road: Ancient Pathway to the Modern World,” on display through Sept. 3, showcases the celebrated trade route that stretched from China to the Middle East. It’s a feast for the senses: In addition to seeing wriggling silkworms and hearing the clip-clop of horses and animals lowing, you can touch silk and other precious fabrics and even smell such wares as jasmine, patchouli and rose oil.

Interactive displays allow children to sport garments from specific eras and learn to tell time using an astrolabe, an instrument once used by navigators to measure positions of celestial bodies.

“We’re aiming for diversity of content with comprehensive displays that appeal to the whole family,” says Bertley. “We want both parents and children to spread the gospel that science is both cool and fun.” 333 W. Broad St., Columbus 43215, 614/228-2674, cosi.org