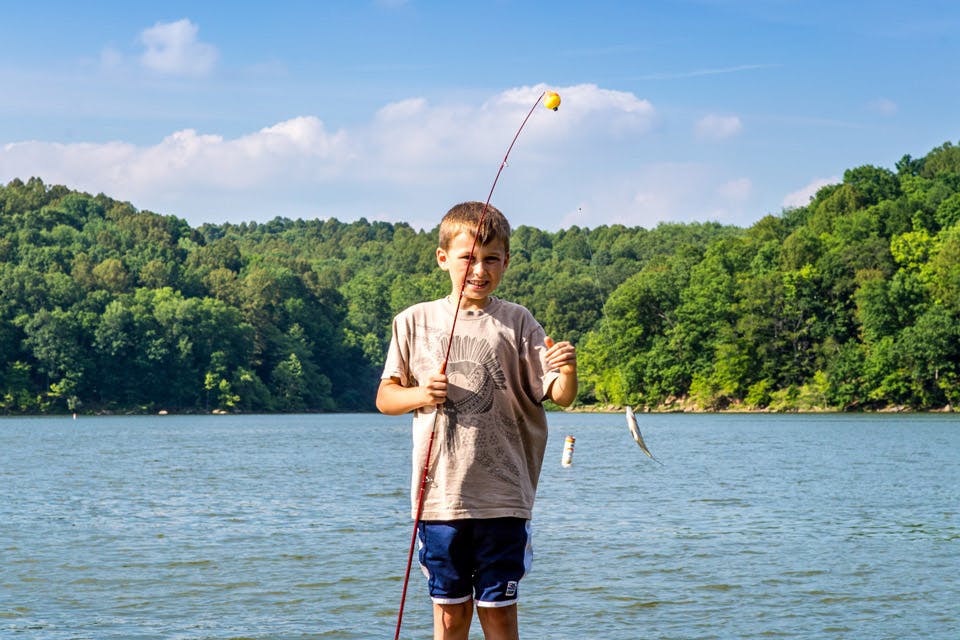 Although its name suggests a trickle, the 36-mile-long Little Beaver Creek (four of which run through Beaver Creek State Park) is one of Ohio’s favorite destinations for paddlers. The river passes through deep valleys and thick forests, and for the past 10 years, John Pomeroy has taken adventurers down it with his business, Beaver Creek Kayak Co.

“There are some Class I rapids, and as the water levels increase, some of the rapids will increase in size,” says Pomeroy. “It’s a relatively mild whitewater and just a nice scenic trip through the different parts of the state park and the state forest.”

But kayaking is just one of the ways to enjoy the river. Little Beaver Creek is ideal for canoes and rafts as well. And no matter what boat you float, you’re bound to enjoy the scenery.

Wayne National Forest blankets southeast Ohio, covering more than 240,000 acres across three tracts of land that touch 12 counties. For those who love the outdoors, it’s a one-stop spot for adventure. More than 300 miles of trails cater to hikers, backpackers, mountain bikers, horseback riders and even all-terrain vehicle riders.

“We offer the largest motorized trail system in Ohio,” says Chad Wilberger, recreation program manager at Wayne National Forest. “We have about 148 miles of motorized trails.”

The motorized trails are part of the Wayne National Forest units in Ironton and Athens (the Marietta unit only has nonmotorized trails), and vehicles permitted include dirt bikes, Side by Side utility-task vehicles and any all-terrain vehicle as long as its axle width is 50 inches or less. (Permits must be obtained online, at one of 14 southeast Ohio vendors or from any of the Wayne National Forest offices.)

Groomed trails roll up the sides of hills and across low creeks, giving riders a glimpse of places they couldn’t easily get to otherwise.

“A good bit of our trails are designed for riders with novice or moderate skill levels,” says Wilberger. “There are some places that are challenging, and you have to be careful.” Trails open April 15–Dec. 15. For more information about permits, contact the Wayne National Forest office at 13700 U.S. 33, Nelsonville 45764, 740/753-0101, fs.usda.gov/wayne

“There are a lot of fallen trees, rocky banks,” explains Matt Hangsleben, a biologist with the Ohio Department of Natural Resources, “so it provides a diversity of habitats for fish.”

That diverse environment means you’ll find many different species of fish, a defining characteristic of a good fishing lake, according to Hangsleben.  “Whether somebody likes to fish for crappie, bass, muskie, saugeye, bluegill — Salt Fork has a lake that has all those species,” he adds.

Salt Fork State Park has nearly 200 campsites, so visitors can stay over and get an early start on the lake. For those who don’t boat, there are plenty of on-shore places to cast a line.

With more than 63,000 acres of woods, seven campsites and more than 100 miles of gravel trails — 60 of which are dedicated exclusively to backpackers — Shawnee State Forest offers far more than a walk in the park. So lace up your boots and explore this southeast Ohio spot for hiking enthusiasts looking to take on some rugged terrain.

“Shawnee is just a little special hidden gem … right on the Ohio River,” says Jenny Richards, a naturalist with Shawnee State Park, which is located within the forest. “It’s a little bit warmer here, too … it’s called the Little Smokies of Ohio.”

Although no permit is required to use the trail, guests are asked to write their travel plans in a book at the trailhead to keep rangers informed. Expect little company on the trail aside from the animals you’ll encounter.

There are more than 250 miles of mountain biking trails in the Ohio State Park system, and you can find 23 of them at Lake Hope State Park’s designated mountain-bike loop.

“Lake Hope has what you’re looking for as a mountain biker,” says Ryan O’Dell, race director of the Ohio Mountain Bike Championship race series. Not only is the course well marked, he explains, but it was also designed to drain well, so your ride won’t be slowed by mud. The course has proven so popular with mountain bikers that the trails at Mohican State Park were modeled after those at Lake Hope.

“Flow is what makes mountain biking really fun, when you can carry your speed,” says O’Dell. “There’ll be some climbing, but you’re never climbing for very long, and most of the time you’re carrying your speed into the next hill. That’s what’s so great about Lake Hope … the way it was designed.”  27331 St. Rte. 278, McArthur 45651, 740/596-4938, parks.ohiodnr.gov/lakehope

Located less than 45 minutes from Cincinnati, East Fork State Park covers nearly 5,000 acres and 46 miles of trails that are a day hiker’s dream.

Several short loops are accessible from the 416-site campground at the northern end of the park. The 1-mile Whipporwill Trail is a favorite, but visitors looking for something more strenuous will find it here as well.

“We have a 32-mile perimeter trail that goes all the way around the lake,” says Chad Smith, park manager at East Fork and Stonelick state parks. “That’s a very common destination for backpackers and hikers.”

For day hikers looking to take on 5- or 10-mile segments of the trail over the course of a long afternoon, Smith recommends accessing the trail at the southern end of the park. “You get a lot of great views of the lake,” he says.
“There are some nice vistas down there.” 3294 Elklick Rd., Bethel 45106, 513/734-4323, parks.ohiodnr.gov/eastfork