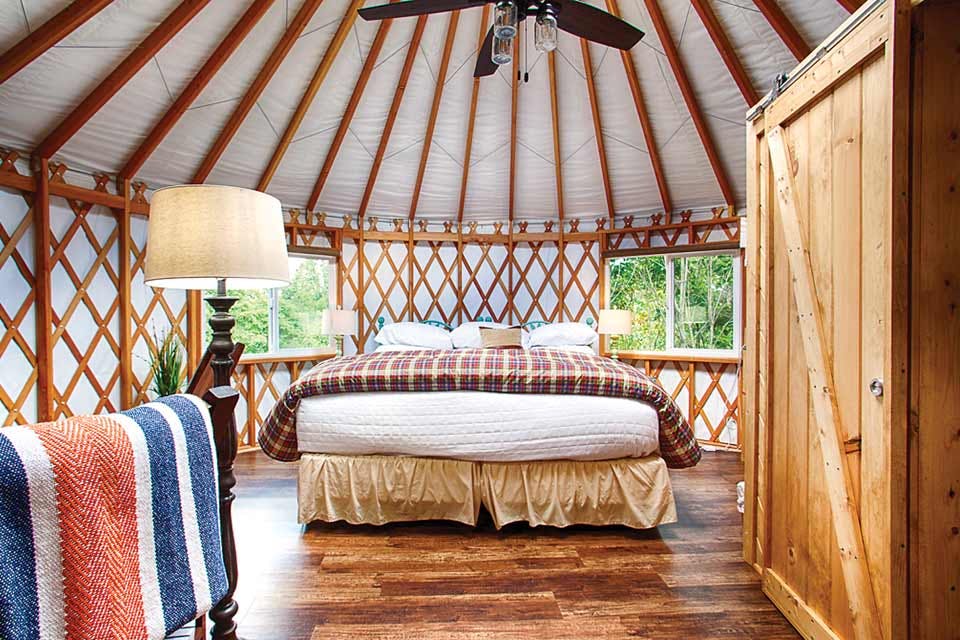 The Inn & Spa at Cedar Falls offers its own version of roughing it: overnight stays in a completely comfy yurt.

Note: In 2019, Ellen and Terry sold the Inn & Spa at Cedar Falls to Zac and Lauren Loomis, who continue to run the business, including the yurts, and carry on the former owners’ vision. For more information, visit innatcedarfalls.com/meet-the-owners.

Swing the door open and any reservations about whether sleeping in a tent can be a luxurious experience immediately melt away.

From the king-size bed to the plush robes to the fancy bathroom and tiled shower tucked into the corner of the rounded space, the Inn & Spa at Cedar Falls’ newest overnight option is at once both elegant and a lot of fun.

Owners Ellen Grinsfelder and Terry Lingo added three yurts during the summer of 2017 to broaden the offerings at their Hocking Hills property, which already had cabins, cottages and traditional rooms among its accommodations.

If you're not exactly certain what a yurt is, you're not alone. Central Asian nomads used them for centuries because of their portability, but today they’ve become a creative way to merge cabin comforts with the being-one-with-nature appeal of tent camping.

Grinsfelder first stayed in a yurt during an innkeepers meeting in Virginia. Although Lingo doesn’t normally travel to such events with her, he wanted to see what the yurt was all about.

“So, I go off to my day’s meeting, and I came back and Terry said, ‘OK, I’ve already taken 50 pictures, I’ve met with the innkeeper, I’ve called the company out in Oregon, and I think we ought to put up yurts,’ ” Grinsfelder recalls.

The Inn & Spa at Cedar Falls’ yurts have a frame of Douglas fir wrapped in NASA-developed reflective insulation and covered with architectural fabric. The result is a climate-controlled space that is as inhabitable at the height of summer as it is when the snow starts to fly. A round skylight in the center allows tons of natural light in during the day and offers a window to the stars once the sun goes down.

Each of the Inn & Spa at Cedar Falls’ yurts have two rocking chairs a gas log stove, microwave, refrigerator and sink in addition to a  hotel-worthy bathroom.

“Everything had to be custom designed, in there,” adds Grinsfelder, “because you can’t buy a circular shower.”

Each yurt’s king-size bed can be split into two twin beds, and Grinsfelder says the accommodations are a popular choice for girlfriend getaways to the Hocking Hills.

Kelleys Island State Park: Ohio State Parks offers yurts at eight of its locations, but if you want to truly get away, opt for one of the two at Kelleys Island. With room for up to six people, the accommodations include a small kitchen, shower and bathroom. parks.ohiodnr.gov/kelleysisland

The Wilds: Cumberland’s safari park and conservation center is home to more than 500 rare and endangered animals, and after the sun sets, you can sleep among them in one of 12 adults-only yurts that include queen-size mattresses, full bathrooms, free Wi-Fi, a private deck and 24-hour concierge service. thewilds.org