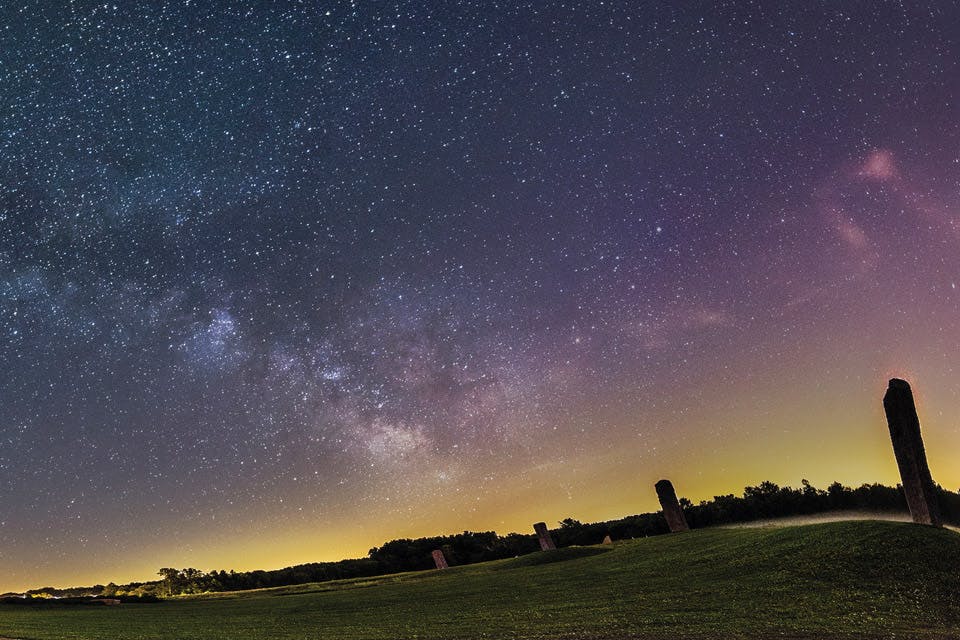 If you want Ohio’s best nighttime views, head to one of these four parks.

Finding truly dark skies in the seventh-most populated state in the country can be tough, but hidden away in rural Geauga County is one of just 36 dark-sky parks in the nation and one of only 10 located east of the Mississippi River.

The Geauga Park District’s Observatory Park in Montville Township was granted status as a silver-tier dark-sky park by the International Dark-Sky Association in 2011.

“I would describe the IDA as the self-appointed dark-sky sheriffs in the world,” says Geauga Park District naturalist Chris Mentrek. “They keep tabs on light pollution around the world and have great tips on how to prevent light pollution [at] your home as well.”

The 1,100-acre park hosts free public events every second and fourth weekend of the month. After arriving, make your way to the main plaza to check out the sundial, a display of lunar phases and weather and seismic-monitoring stations. There’s also a constellations globe, gardens and an interactive model of the solar system.

Visitors can then head from the plaza to the 1-mile loop Planetary Trail, which has displays representing the planets in our solar system distanced from one another to scale, offering guests an idea of how very far away planets such as Neptune and Uranus are from Earth. The quarter-mile Weather Trail offers exhibits on weather systems and is surrounded by an outline of the Great Pyramid of Giza along with earthen mounds and stones that educate viewers on how humans have studied astronomy through history.

The Nassau Astronomical Observing Station, a second observatory, is located on an adjacent property formerly owned by Case Western Reserve University. The Geauga Park District purchased it in 2008 and has since completed a renovation of the structure. The station and its 36-inch telescope is open to visitors for certain events.

“What I like most about Observatory Park is it’s the park where you’re not chased out at sunset,” says Mentrek. “We encourage people to stay and enjoy the night sky.” 10610 Clay St., Montville Township 44064, 440/286-9516, geaugaparkdistrict.org

Located 4 miles outside the village of Glouster, this 2,593-acre park offers stargazers the chance to check out celestial sights in a remote setting. With a population of fewer than 2,000, Glouster produces little light pollution, while the closest city, Athens, is more than 15 miles to the south. A permit isn’t required, but be sure to notify the state park’s office if you plan to visit after dusk. 10220 Burr Oak Lodge Rd., Glouster 45732, 740/767-3570, parks.ohiodnr.gov/burroak

The park is known for having one of the most extensive fossil records in the state, and its night skies are some of the darkest in Ohio. It is a common destination for both the Cincinnati Astronomical Society and the Friends of the Observatory, a group affiliated with the Cincinnati Observatory Center. The 1,058-acre park offers daytime activities and camping starts at $18 a night. 2895 Lake Dr., Pleasant Plain 45162 (GPS address), 513/734-4323, parks.ohiodnr.gov/stonelick