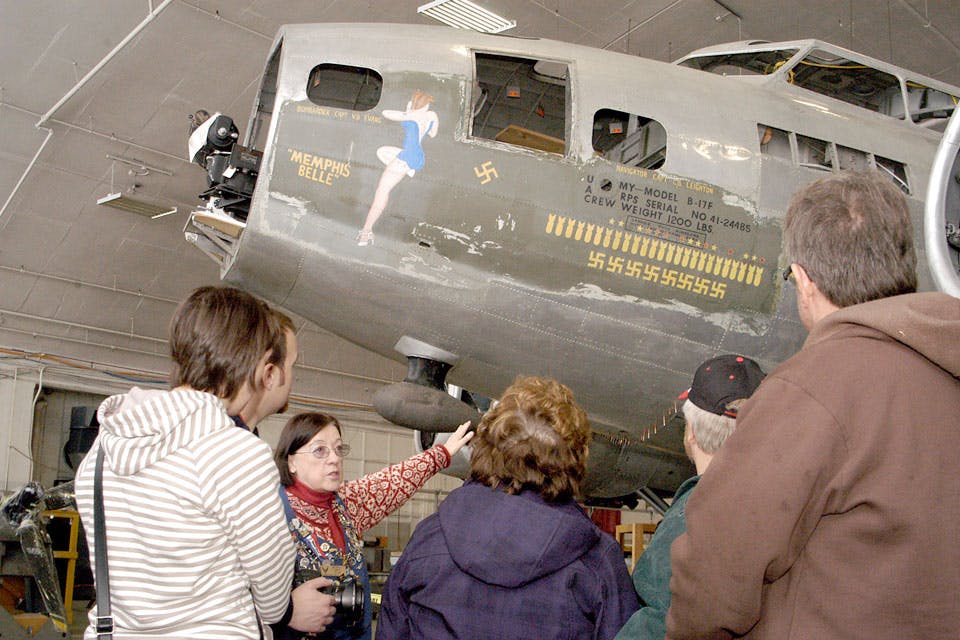 One of World War II’s storied flying machines is being painstakingly restored near Dayton.

The sound of revved up power tools and dropped sheet metal echo loudly throughout the massive airplane hangar located within the perimeter of Wright-Patterson Air Force Base.

Loose propellers spread across the space surround the rough and stripped fuselage of a military legend. Despite its faded appearance, a familiar redheaded woman painted on the aircraft’s nose is an easy giveaway to World War II historians as to what is being resurrected here.

For the past nine years, restoration experts have diligently worked in this nondescript hangar adjacent to the National Museum of the United States Air Force, seven miles outside of Dayton, to piece together the Memphis Belle, an iconic American airplane that epitomizes what made the United States an aerial force during World War II. In 1943, the famous Boeing B-17F bomber was the first of its kind to complete 25 missions and return to the United States and was a decisive factor in air raids that were key to the Allies’ success.

“The history that surrounds this airplane makes it really significant for the guys working on it,” says Greg Hassler, the museum’s restorations supervisor. “It’s a career opportunity to be able to work on something like this. It represents the sacrifices that generation made, when you couldn’t even buy a new car and everything went towards the war effort.”

While the museum estimates that the Memphis Belle’s restoration and subsequent exhibition won’t be ready until May 2018, visitors can witness the reconstruction firsthand thanks to limited, by-reservation free tours that are offered most Fridays at 12:15 p.m.

Besides being immortalized in history books over the years, the Memphis Belle was also the subject of two films: the 1944 documentary “The Memphis Belle: A Story of a Flying Fortress” and the 1990 film “Memphis Belle” directed by Michael Caton-Jones. The aircraft came from a special class of bombers known as Flying Fortresses, which were equipped with four 1,200 horsepower Wright R-1820-97 engines, 13 .50-caliber machine guns and 6,000 pounds of bombs. True to their name, the planes were built to take on heavy fire thanks to hollow tubular metal inside the wings weaved together like a bridge and corrugated metal sheeting shaped like the ridges between the walls of a cardboard box. 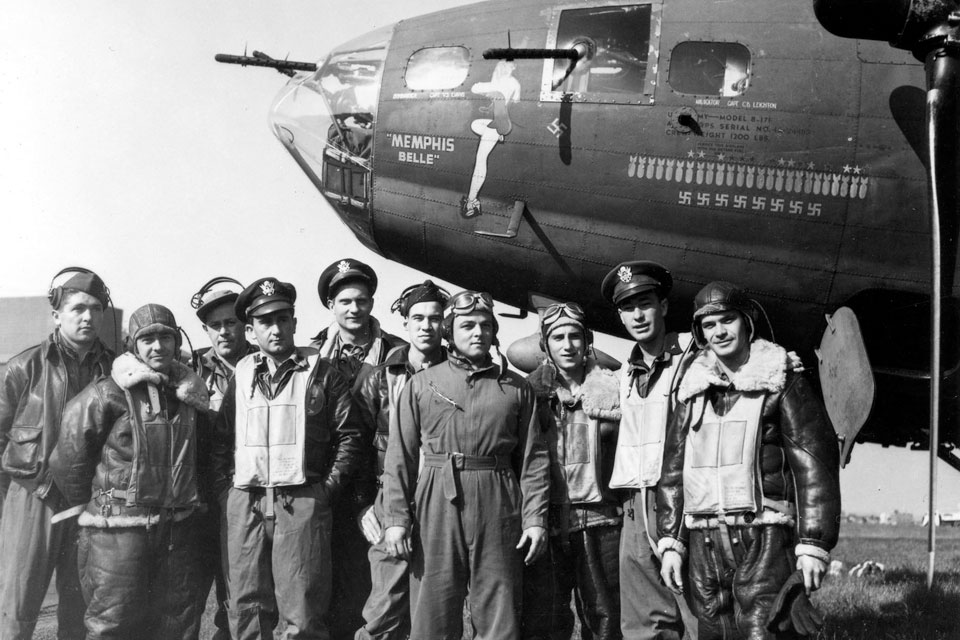 This photo shows the Memphis Belle and its crew in 1943, following the plane’s 25th mission. The name Memphis Belle came as a tribute to pilot Bob Morgan’s then-girlfriend Margaret Polk and her hometown. Painted on the nose of the plane was a portrait of a classic pinup girl, another homage to Morgan’s wartime sweetheart. (photo courtesy of U.S. Air Force)

“There are pictures of these airplanes coming back where guys are standing in holes on the horizontals,” Hassler says. “On this particular airplane, there was a hole blown in the vertical stabilizer that was probably four or five feet in diameter, and they were still able to fly it back and land it.”

However massive and robust the Memphis Belle appears from the outside, witnessing the cramped quarters of the plane’s interior makes it easy to envision the struggles of combat, with a crew of 10 firing large machine guns practically back to back while being weighed down with heavy fleece-lined clothing.

Even the claustrophobia-inducing confinement of the narrow flight deck pales in comparison to that of whoever operated the ball turret, a small pod-like space where the gunner had to sit in the fetal position to fit inside and had no parachute with him in the tiny space.

“All the gunners had was a small safety strap to wrap around themselves,” explains restorationist Chad Vanhook. “If the airplane was going down, they would have to get out of the ball turret, put a parachute on and then bail out.”

The name Memphis Belle came as a tribute to pilot Bob Morgan’s then-girlfriend Margaret Polk and her hometown. Painted on the nose of the plane was a portrait of a classic pinup girl, another homage to Morgan’s wartime sweetheart.

The inspiration for the artwork came from an illustration created by George Petty for an issue of Esquire in April 1941, which led to the finished product done by Tony Starcer. Although Morgan and his sweetheart did not get married after the war, their relationship became a symbol of hope for those who had loved ones waiting at home. 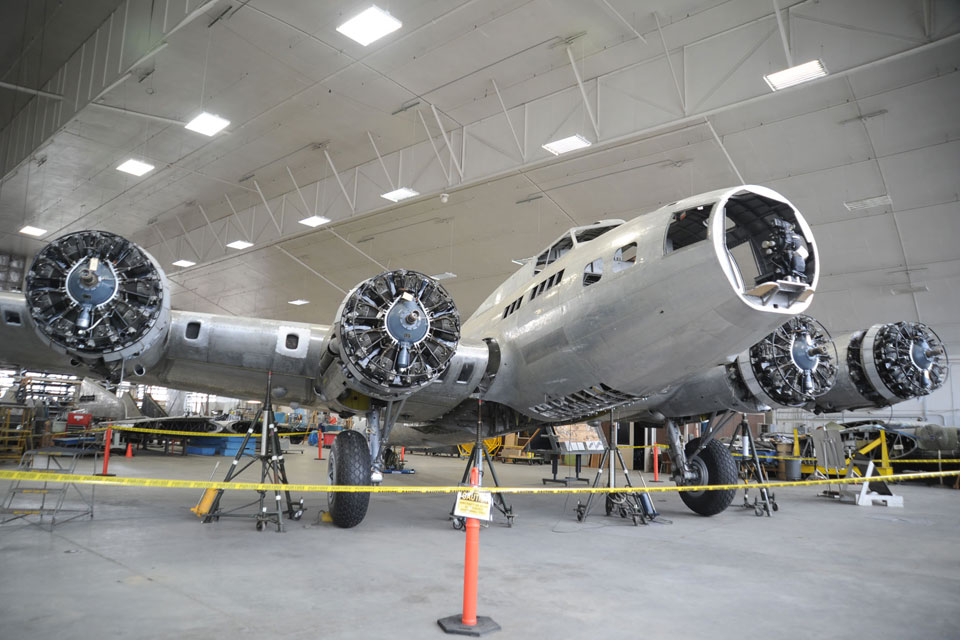 “The history that surrounds this airplane makes it really significant for the guys working on it,” says Greg Hassler, the museum’s restorations supervisor. “It’s a career opportunity to be able to work on something like this. It represents the sacrifices that generation made, when you couldn’t even buy a new car and everything went towards the war effort.” (photo courtesy of U.S. Air Force)

“It’s all centered around this idea that he’s going off to fight the war while she’s faithfully waiting for him back at home,” explains museum curator Jeff Duford. “When the war ends, he’ll come home, they’ll get married and they’ll have the American Dream. This was something that thousands upon thousands of our troops were going through.”

When the Memphis Belle arrived in Dayton in 2005, it was the first time it had been brought indoors in decades. Despite its celebrity status from a three-month war bond tour in 1943, the plane became excess property for years and was heading for the scrapyard until the mayor of Memphis, Wyeth Chandler, ordered that it be preserved.

Luckily, the body of the plane wasn’t as corroded as feared and a majority of the original components survived over the years. By the time the aircraft is ready for exhibition, the museum’s restorationists will have assembled all the electrical, hydraulic, oxygen and flight control components as close as possible to how they were during the plane’s wartime missions. But that doesn’t mean the Belle will be taking flight.

“We don’t restore our airplanes to fly,” Hassler explains. “We wouldn’t want to take a chance on starting up an airplane like this and risking a fire and losing a significant artifact.”

For the restoration process, Hassler and his team first had to disassemble the plane completely to identify any corrosion or damage that might be hidden in the crevices. Once the damage was assessed and the parts had been cleaned, the plane was deemed to have a solid foundation and structure for reassembly.

“Many of the construction techniques are like carpentry,” Hassler says. “They don’t change hugely over time. You shoot rivets the same way today as you did 80 years ago.”

Those who wish to tour the Memphis Belle restoration must register with the museum in advance, and tour participants must be over the age of 12. To register, call 937/656-9436 or visit nationalmuseum.af.mil.