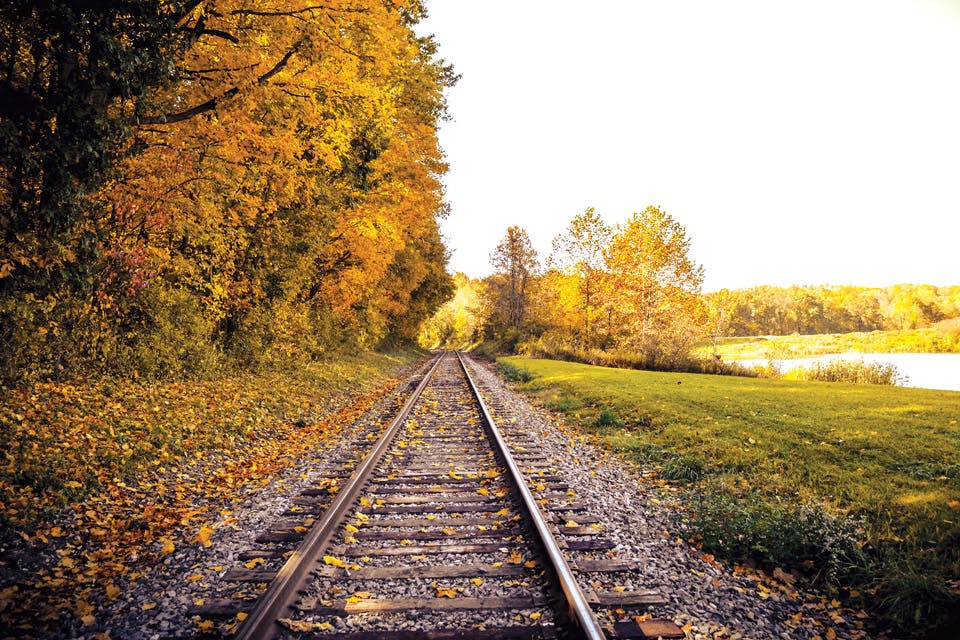 If you have a full day for an adventure, these places offer a wealth of options for exploring.

More than 125 miles of hiking trails wind through Cuyahoga Valley National Park, but lacing up your hiking boots is just one of the ways to enjoy the 33,000-acre mix of forest and prairie between Cleveland and Akron. The river valley is also perfect for picnics, fishing, biking and more, especially as summer shifts to autumn. Here are four great ways to spend a fall day within the borders of Ohio’s only national park.

Explore the Towpath Trail:This trail follows the route of the Ohio & Erie Canal, which opened the transportation of goods deep into Ohio during the 19th century. There are 11 trailheads in the park from which explorers can start their journey, and remnants of the old canal locks can be seen along the route. “There are many choices for deciding the length of your trip,” says Pamela Barnes, community engagement supervisor for Cuyahoga Valley National Park. “You can walk, bike, push a stroller — there are a lot of different modes of transportation for families to view the fall leaves.” Visit nps.gov/cuva for trailhead locations.

Visit Brandywine Falls: Among the most popular attractions at Cuyahoga Valley National Park, the 65-foot Brandywine Falls provides visitors a breathtaking view. Steps and boardwalks lead travelers from the parking lot down to the falls, which was used during the early 1800s to power businesses located along Brandywine Creek. The 1.5-mile Brandywine Gorge Trail is a perfect fall hike, leading visitors from the falls down to a bridge that crosses the creek below and heads up the other side of the gorge. “The fall colors here are beautiful because it’s a forested area,” Barnes says. 8176 Brandywine Rd., Sagamore Hills 44067, nps.gov/cuva

Take in Ledges Overlook: Ledges Overlook offers one of the park’s best views of the river valley, but it isn’t the only draw here. Get a solid hike in on the 2.2-mile Ledges Trail, a loop that weaves along enormous rock outcroppings. The park urges caution near the edges and prohibits rock climbing, but with proper safety measures, a visit to Ledges Overlook can leave visitors with one of the most memorable experiences they’ll find in the Cuyahoga Valley. “You can see all over the whole valley,” Barnes says. “It’s a perfect spot for watching the sun set on a fall day.” 701 Truxell Rd., Peninsula 44264, nps.gov/cuva

Cuyahoga Valley Scenic Railroad: Cuyahoga Valley National Park covers a lot of ground, and for those who want to explore all of it, getting from one section to the next without driving is no small feat. The Cuyahoga Valley Scenic Railroad can help with that. The organization runs an excursion rail from Independence to Akron, with seven stops in between. Cyclists can ride the Towpath Trail in one direction and hop the train back — bike and all — for a small fee. All the railroad asks is that riders arrive at least 10 minutes before the scheduled departure time. For more information on train schedules and depot locations, visit cvsr.com.

Roscoe Village, Coshocton
Autumn is one of the best times to experience southeast Ohio’s restored 1830s-era canal town. Not only can you enjoy a boat ride on the horse-drawn Monticello III, you can take in Roscoe Village’s annual Apple Butter Stirrin’ Festival. Set for Oct. 19 through 21, the celebration corresponds with the Monticello III’s last weekend of operation each year. “The time I like working best is the fall,” says Edward Finlay, who captains the Monticello III along a restored portion of the Ohio & Erie Canal. “That’s probably my favorite time to look at the environment as we ride the canal boat.” Between 10,000 and 12,000 people visit the village during the Apple Butter Stirrin’ Festival each year. Admission is $5 (ages 11 and under free), which includes admission to the village’s living history buildings. 600 N. Whitewoman St., Coshocton 43812, roscoevillage.com 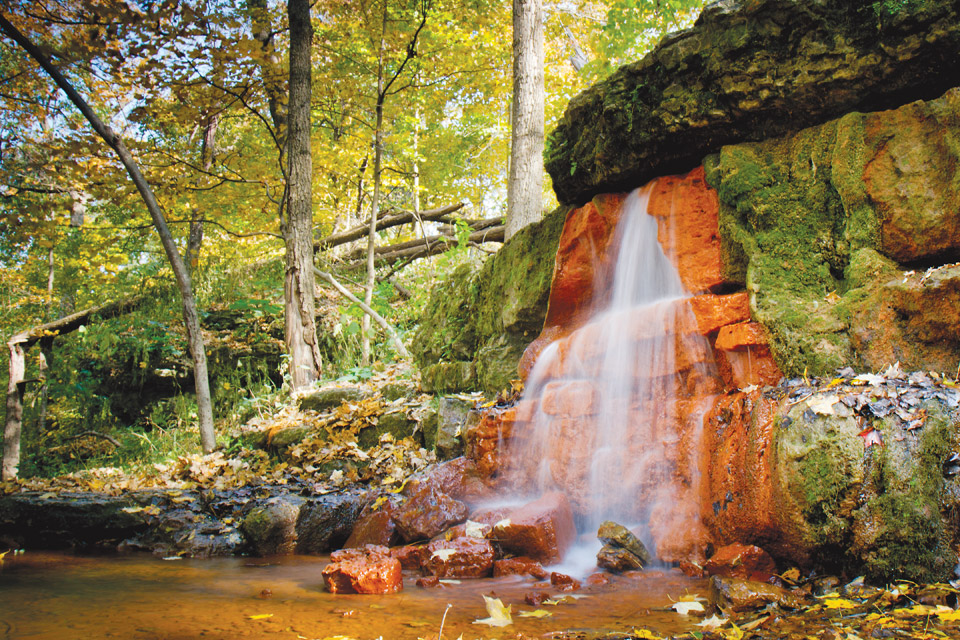 Nature Walk: Glen Helen Nature Preserve is located just a short walk from downtown Yellow Springs. What began as a donation to Antioch College now encompasses 1,000 acres that are all accessible from the park’s 20 miles of paths. glenhelen.org 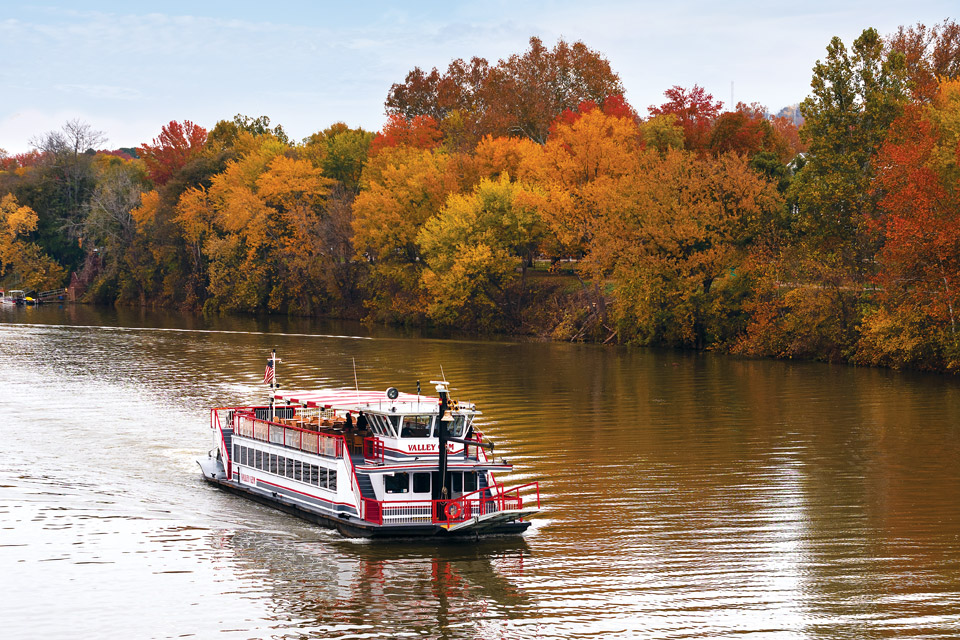 The Valley Gem Sternwheeler, Marietta
Fall is the perfect time to choose from one of two excursions in this historic river town.

Whether you’re looking for a modern voyage or historical expedition, you’ll find it all on Marietta’s Valley Gem Sternwheeler. Built by the Sands family in 1989, the boat offers a number of public tours from May through December down the Muskingum and Ohio rivers, including narrated sightseeing tours, dinner cruises and murder mystery dinner theater trips.

The Muskingum River hosts the Valley Gem’s more historically centered voyages, featuring locks that work the same as they did in 1841. In order to raise or lower the water in each, a lock keeper operates the system by hand. This can be observed from the boat’s upper deck as the captain explains the process. Adding to the ambiance, passengers rarely see other watercraft during this tour, only the occasional fishing boat or kayak. The river here is simply too shallow to warrant much traffic, and the Gem is the only passenger boat operating on it.

On the flip side, Ohio River tours offer a more modern experience. The river is vast and the lock systems are automated, so the Gem shares the river with barge traffic and pleasure cruises.

Fall is an ideal season to experience the rivers’ sights. The banks of both the Ohio and Muskingum rivers are covered in trees bursting with colorful foliage. Combined with the crew’s historical stories and the boat’s dinner menu, you’re in for a memorable adventure no matter which river you explore.

“People may come for one part of the trip, be it the food, the river or the history, but it’s the experience as a whole that keeps them coming back,” says Heather Sands, the Valley Gem’s manager.

Expeditions are rain or shine but the boat’s entire lower deck is enclosed and climate controlled, and the upper deck has an awning to protect passengers from rain. 601 Front St., Marietta 45750, 740/373-7862, valleygemsternwheeler.com 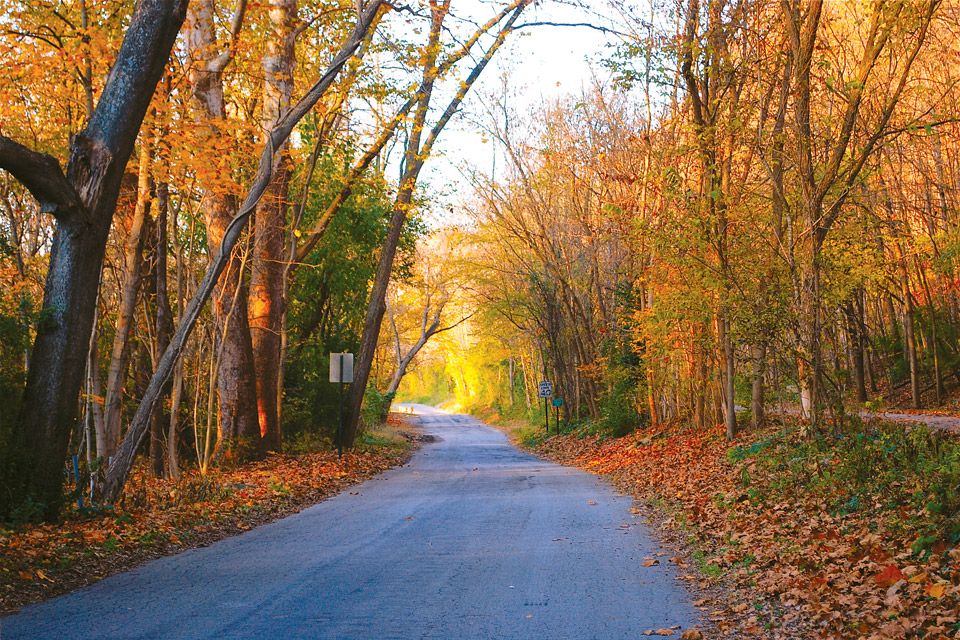 Autumn Ride: For those looking to cover a little more ground this fall, the 78-mile Little Miami Scenic Trail stretches from Springfield in Clark County to Anderson Township in Hamilton County. John Bryan and Caesar Creek state parks are both accessible from the route. miamivalleytrails.org

Ashtabula County is home to 19 covered bridges, and author Carl Feather has studied and photographed them for years. The 613-foot Smolen-Gulf Covered Bridge gets a lot of attention for being the longest covered bridge in the United States. Completed in 2008, the structure was named after Ashtabula County engineer John Smolen. “The reason so many covered bridges survived in Ashtabula County is because of him,” Feather says. The county’s newest covered bridge is the 150-foot Indian Trails Riverview Bridge. Dedicated in 2016, it replaced a steel-and-concrete structure and is available for use by pedestrians, bicyclists and horses. “It’s one of the last places in the county where the leaves turn,” Feather says. “You can get there in late October and still see some great colors.” Another of Feather’s favorite bridges is the Benetka Road Bridge, built around the turn of the 20th century and rehabilitated in the mid-1980s. “I really like this bridge,” he says. “It has redwood siding that was [added] in 1985.” For more information, go to  visitashtabulacounty.com.