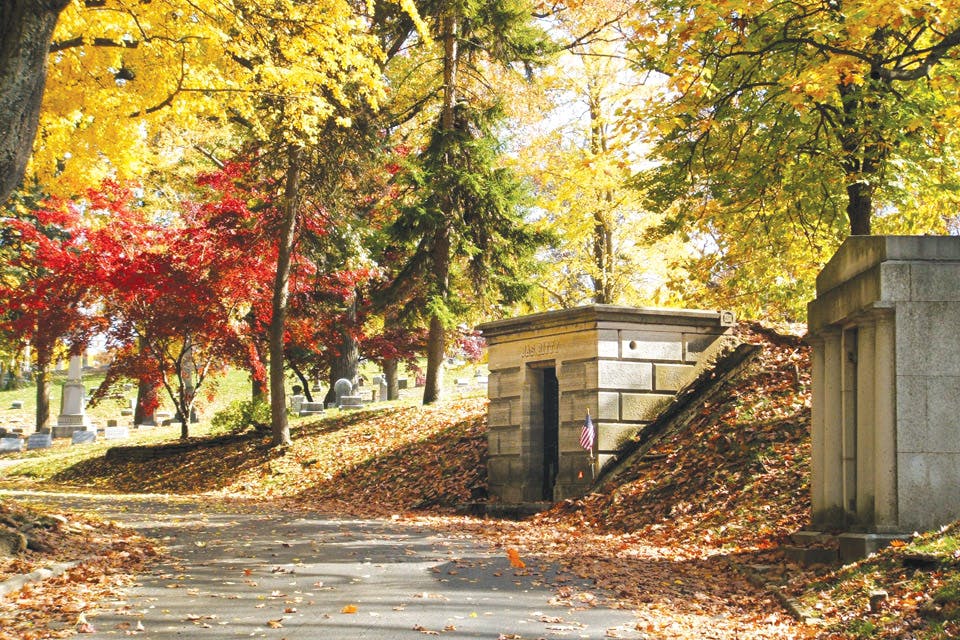 If you have only have a few hours to spare, these attractions provide a great afternoon getaway.

Garden Cemeteries
These three peaceful places of rest come alive with color each autumn as the trees begin to change.

Lake View Cemetery isn’t quite as old as the city of Cleveland, but it has trees that are, including a grand tulip tree and ginko trees near the obelisk that marks John D. Rockefeller’s grave and the James A. Garfield Memorial. The balcony of Garfield’s monument offers vistas of the cemetery and miles of Lake Erie shoreline. Slightly less well known, but more accessible, is the hill where cemetery founder Jeptha Wade is buried. “It’s one of my favorite spots,” says Katharine Goss, president and CEO of the cemetery. “You can see all the pockets of color.” 12316 Euclid Ave., Cleveland 44106, 216/421-2665, lakeviewcemetery.com

Spring Grove Cemetery in Cincinnati is the second-largest nonmilitary cemetery in the country, but it was laid out with more in mind. “The intent was to make it a public garden,” says Dave Gressley, the cemetery’s director of horticulture. Spring Grove is home to 27 state champion trees (a distinction given by the Ohio Department of Natural Resources) and a 400-year-old white oak. Gressley says the best views can be found in the cemetery’s newer section, which provides views of oak, maple, hickory, ash, poplar and sassafras trees. He says the best fall viewing is typically early to mid-October. 4521 Spring Grove Ave., Cincinnati 45232, 513/681-7526, springgrove.org

Woodland Cemetery and Arboretum in Dayton is home to more than 3,000 trees. But one in particular — a Baltic ash — stands out because of its mysterious origin. “We don’t know how it got here or when,” says Kay Linden, who guides the cemetery’s monthly tree tours. The cemetery serves as the final resting place for humorist Erma Bombeck, African-American poet Paul Laurence Dunbar and the Wright brothers, and from its Lookout Point, you can see the Dayton skyline. “You can get an excellent view of lots of color variation there,” Linden says. 118 Woodland Ave., Dayton 45409, 937/228-3221, woodlandcemetery.org

At one point, there were more than 40 watchtowers throughout Ohio, but the improvements in detecting and preventing forest fires have rendered the structures obsolete for their original purposes. Seven currently remain, and the public is still allowed to climb five of them.

“It’s a neat legacy that Ohio has,” says Chad Sanders, forest manager for Mohican-Memorial State Forest, where one of the five is located. “You used to be able to see basically the whole forest from it, but it’s overgrown a bit now. You still get quite a view.”

Sanders says the watchtowers were just one facet of the Ohio Department of Natural Resources and Division of Forestry’s fire-prevention program, which has continued on even after the decommissioning of the towers in the 1970s.

“We’ve had a really large fire program since the ’20s and ’30s, and part of that is forest protection. The towers were part of that,” Sanders says. “We’ve kept those towers as a kind of educational outreach to show what the division has done over the years to protect our forests.” Visit fallcolor.ohiodnr.gov/views for more information about Ohio’s public fire watchtowers. 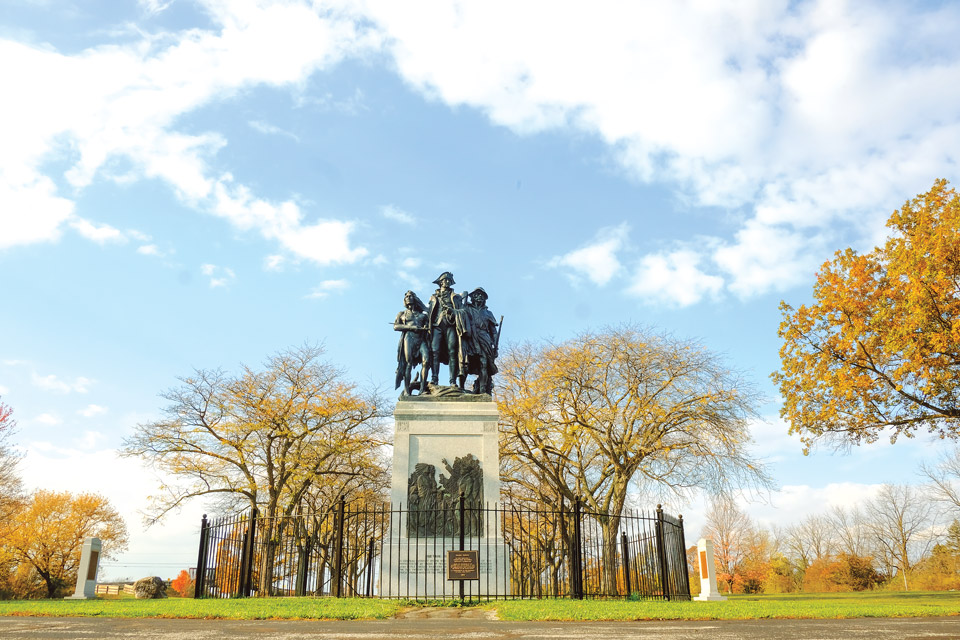 Fallen Timbers Battlefield, Maumee
A pivotal moment in United States history is remembered at this site that helps tell the story of America’s westward expansion.

On a crisp mid-autumn afternoon, Fallen Timbers Battlefield is bright with color and bustling with activity, from hikers and families riding bicycles to the birds flying overhead. The trail around this battlefield — site of the 1794 Battle of Fallen Timbers during the Northwest Indian War — draws an estimated 100,000 people each year. That’s impressive given that it is relatively new and preserves the site of a pivotal, yet often forgotten moment in U.S. history.

The United States had lost several battles when President George Washington formed the country’s first formal army. Led by Revolutionary War hero Gen. “Mad” Anthony Wayne, the U.S. forces were ready for the Battle of Fallen Timbers. Afterward, the American Indians signed the Treaty of Greenville, which gave the U.S. most of Ohio and opened up the Northwest Territory to expansion.

“The face of the U.S. would be completely different but for this battle,” says Shannon Hughes, manager of park programming and interpreter at the site.

Fallen Timbers is a place where history meets nature and recreation. Those who fought the battle named this area for the land’s features, Hughes explains. A tornado that hit two years before the battle left several felled trees, or “fallen timbers.” Today, the battlefield is run through a partnership between Metroparks Toledo, the National Park Service and the Fallen Timbers Battlefield Preservation Commission.

“The fall is beautiful here,” Hughes says. “The battlefield has been open for two years, and we’re still getting the word out that it’s open.”

After visiting the battlefield, a stop at the nearby Fallen Timbers Monument also offers great fall views. The monument honors all those who fought in the battle and overlooks the flood plain of the Maumee River, long thought to have been the actual battle site until an archaeological dig turned up the real one. Trails on the flood plain through Side Cut Metropark offer views of changing leaves and rows of prairie plants with brilliant hues of red, orange and yellow, as well as a glimpse of the rapids on the mighty Maumee River.Fallen Timbers Battlefield, 4949 Jerome Rd., Maumee 43537; Fallen Timbers Monument, 5601 Anthony Wayne Trail, Maumee 43537; 419/408-9700, metroparkstoledo.com, nps.gov/fati

Fall Festival of Leaves, Bainbridge
As the green hills of Ross County transform into shades of red and orange, Bainbridge celebrates its Fall Festival of Leaves. The annual event typically runs Thursday through Sunday, with antique and classic car shows, music, carnival food and more. There’s also a 5K run/walk, a prince and princess contest and the Fall Festival of Leaves parade. “It’s always been like a homecoming for the people around Bainbridge,” says Keith Johnson, a festival chairman. “They always come back and have a great time. It’s just grown and grown.” Bainbridge 45612, 740/703-8833, fallfestivalofleaves.com 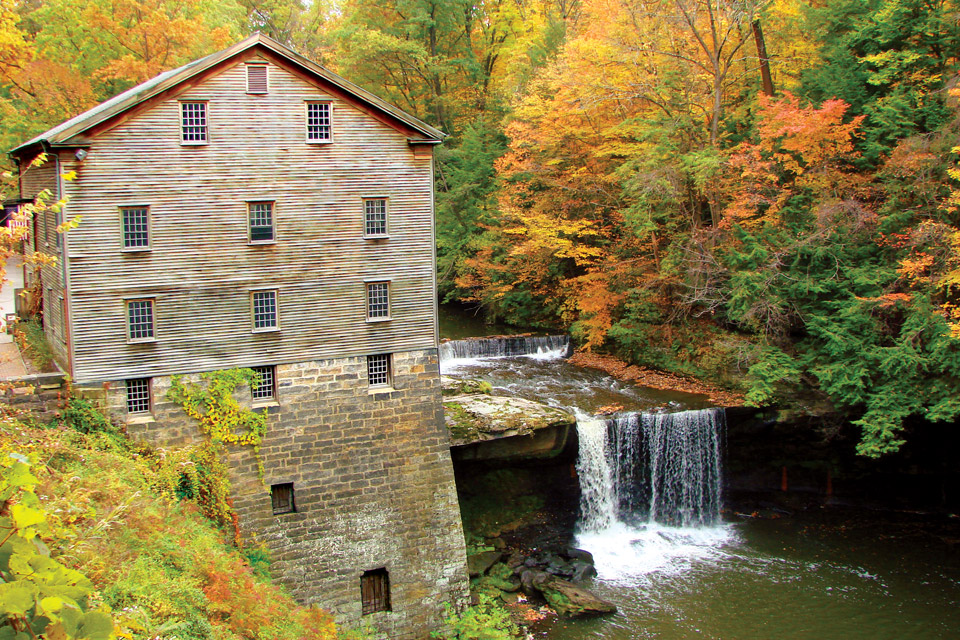 Photo Opp: This 1846 gristmill is the most famous feature of Youngstown’s Mill Creek Park. Located a short walk from the parking lot, Lanterman’s Mill offers an ideal setting for capturing the fall color in the surrounding gorge, which is home to maple and oak trees. millcreekmetroparks.org

Arboreta
The Holden Arboretum in Kirtland and The Dawes Arboretum in Newark provide beautiful showcases of fall color this time of year. Here are a few of the numbers behind these destinations that offer a diverse collection of tree species.