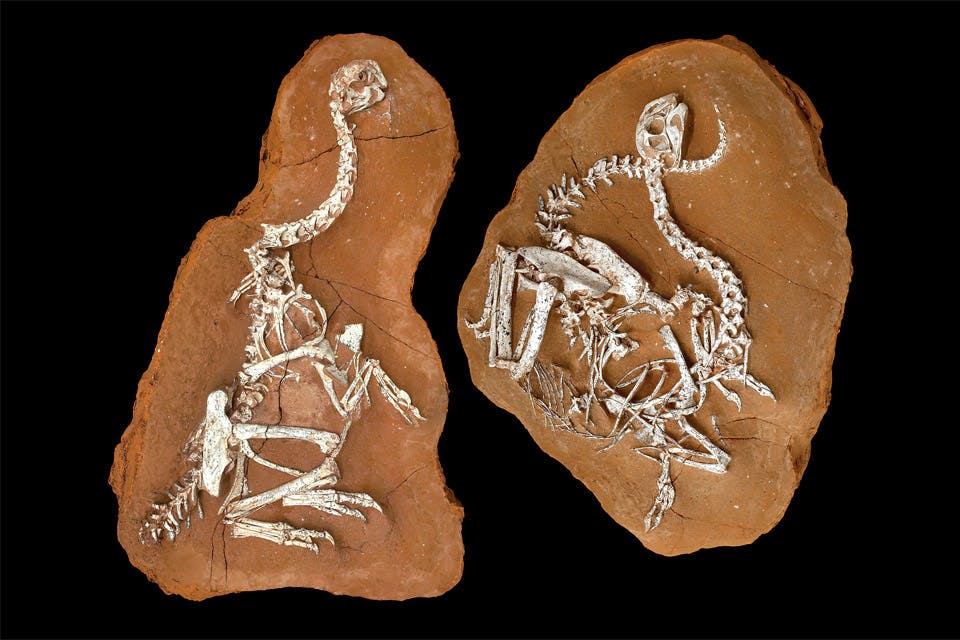 The Columbus science center’s collaboration with New York’s American Museum of Natural History brings a new permanent gallery and a fresh perspective on the creatures we only think we know.

“We wanted a dramatic shot when you walked in,” says Josh Kessler as he steps into the exhibition space and nods up at the cast of the open-mouthed Tyrannosaurus rex staring back. Kessler, director of experience production at Columbus’ Center of Science and Industry, pretends to stick his head in the dinosaur’s mouth.

“Isn’t this a fantastic selfie spot right here?” he jokes. “Me and the T. rex.”

A silver-painted Brontosaurus and an 8-foot-long femur of a Titanosaur stand nearby, while lakeside dioramas and medicine ball-sized Stegosaurus footprints tower over the packaging tape, Shop-Vacs and loose debris that serve as reminders that the exhibition is still a few weeks away from its Nov. 18 grand opening.

Kessler, a wavy-haired 39-year-old in black Converse All-Stars, walks on, past a large placard that describes the oft-heard asteroid story of dinosaur extinction and into the largest area of COSI’s new American Museum of Natural History Dinosaur Gallery.

“We all know the story of extinction,” he says. “But all life on earth was not wiped out.”

The exhibition space opens up. There are glass plates featuring a variety of bird feathers; a 30-foot-long, quill-covered Yutyrannus; and a Tianyulong confuciusi, which looks like a cross between a raptor and a sparrow. There are alligator nests and sculptures that resemble turkeys. By this point in the exhibition, it’s clear to first-timers that this is unlike any of your past trips to a natural history museum.

“There were some survivors, it turns out,” Kessler explains. “Sure, we have our traditional natural history, but now it’s a little different. Because what we know now is dinosaurs weren’t completely extinct. No. They became birds.” 
What Kessler and his dozen-person team have been busy assembling since July is the largest and most pivotal permanent exhibit COSI has presented since its relocation in 1999. The 130-specimen, dinosaur-to-bird narrative also marks the American Museum of Natural History’s first long-term partnership with an Ohio-based science center and one of its seminal permanent exhibitions outside of New York.

AMNH president Ellen Futter and former COSI CEO and president David Chesebrough began talks in fall 2014, and a deal was underway by September 2016. It coincided with the hiring of Chesebrough’s replacement, Frederic Bertley, senior vice president for science and education at the Franklin Institute in Philadelphia. When he heard about the proposal — made possible by a $5 million grant from the state capital budget and $2 million from Leslie and Abigail Wexner — Bertley was ecstatic. Not only was the exhibition making the most of the latest science, it was also one that was ideal for COSI’s evolution.

“We’ve had ‘Titanic.’ We had ‘Body Worlds,’” Bertley says. “But this is a permanent addition. We are permanently increasing the footprint of what COSI covers. Not just natural history in general, but also, ‘Oh my god, dinosaurs!’”

Working side by side with AMNH’s installation and curatorial team, as well as hired stagehands, installers and designers, Kessler got to work renovating the nearly 14,000-square-foot space that would become the AMNH Dinosaur Gallery.

All the electric, HVAC and plumbing were updated for a black box gallery. Crates containing faux hummingbirds and raptors began arriving in July, and for four months, Kessler oversaw the installation of the casts, edited graphics and helped position the enterable mound nest of Crocodylus.

Besides COSI’s goal to make a huge footprint — as reads one banner above the entrance — the exhibit carries with it some serious science. Readers of Scientific American or any paleontology journal know that dinosaur research no longer bears the face borne by Steven Spielberg in his famous 1993 film based on Michael Crichton’s 1990 novel.

With the discovery of the Archaeopteryx in 1861 — “the first proto-bird,” as Kessler calls it — scientists found the missing link between modern birds and small-skulled dinosaurs. In the 1990s, a wave of Chinese fossils suggesting quill-like features furthered the connection, and several other reptile species crossed the bird-dinosaur continuum. 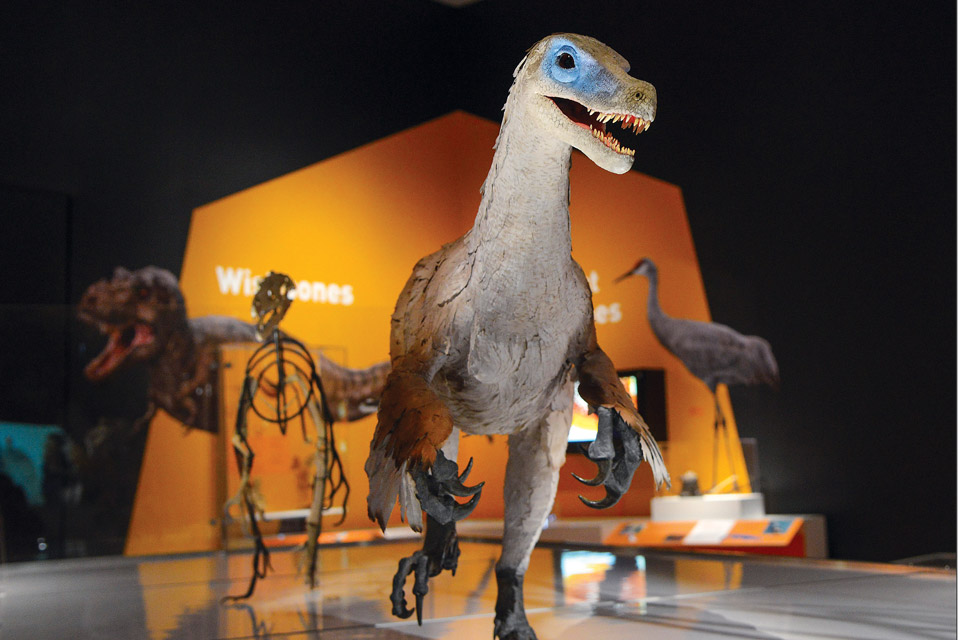 The bird-like traits of Velociraptor mongoliensis included hinged ankles, swivel-jointed wrists, and a furcula, or wishbone. The animal's feet were birdlike, too. (photo courtesy of AMNH / R. Mickens)

By the millennium, more and more paleontologists were in head-nodding agreement: Birds are modern-day dinosaurs. Although the cutting-edge data backing the evolution is accurate, it doesn’t mean the initial sight of a chicken-like raptor isn’t a tad bit strange.

“I would never have thought that we’d be looking at a re-creation of a Tyrannosaurus that looked, well, fuzzy,” Kessler says, standing in front of the sharp-teethed “beautiful feathered tyrant” known as Yutyrannus. Kessler moves on to a 4-foot raptor resembling a bipedal hawk. “And this. This is a Velociraptor. Definitely not what we saw in ‘Jurassic Park.’ ”

For AMNH’s standards, the revolutionary research on display at COSI is nothing unfamiliar to the New York-based science museum. For one, its 70-ton, 120-foot-long Titanosaur is one of the largest paleontological finds in the past two decades. It arrived at AMNH in 2015, a year after a researcher there discovered it in Argentina’s Patagonia region. Although AMNH has struck traveling collaborations with museums from San Francisco to Pittsburgh to Boston, the permanent nature of the Columbus exhibit makes it a breakout partnership for a Midwestern science center.

“It’s a different variation on a theme,” says Ellen Gallagher, senior vice president and chief financial officer at the American Museum of Natural History. “It’s due to the long-term nature of it. We think that if we maintain this strong basis of a relationship with [COSI], then there’ll be a win-win in every case.”

As Kessler orchestrates the final installations of Brontosaurus video projections, helps unwrap and mount all the model bird brains and “half-pint” raptors, he says he hopes the AMNH Dinosaur Gallery will further ramp up the popularity of the museum he has watched grow for more than a decade. Although Bertley isn’t predicting exact numbers for a member spike come spring 2018, he anticipates a “surely progressive bump.” He and Kessler both say the reason why is nothing other than scale: Dinosaurs make us feel like kids again. Small.

Near the end of Kessler’s tour, he shares the story of his childhood favorite, Archaeopteryx, a late Jurassic Period proto-bird that translates as “ancient wing.” For a minute or so, he can’t find it in the exhibit. “You would think I would know where it is,” he says, “of all people.” Kessler finally spots it — it’s near the bird feathers in glass — and starts beaming like a teenager on Christmas. “The Archaeopteryx,” he says, proud. “Isn’t it just excellent?”

Yet, as Kessler notes, this is the current version of what we know about Archaeopteryx. While walking toward the exit and past the remaining models, Kessler adds: “But still, who knows. Natural history is not just these fossil casts. I mean, this is what we ‘know’ a dinosaur looks like now, but what about in 20 years — in 30? I suppose we’ll just have to wait.”