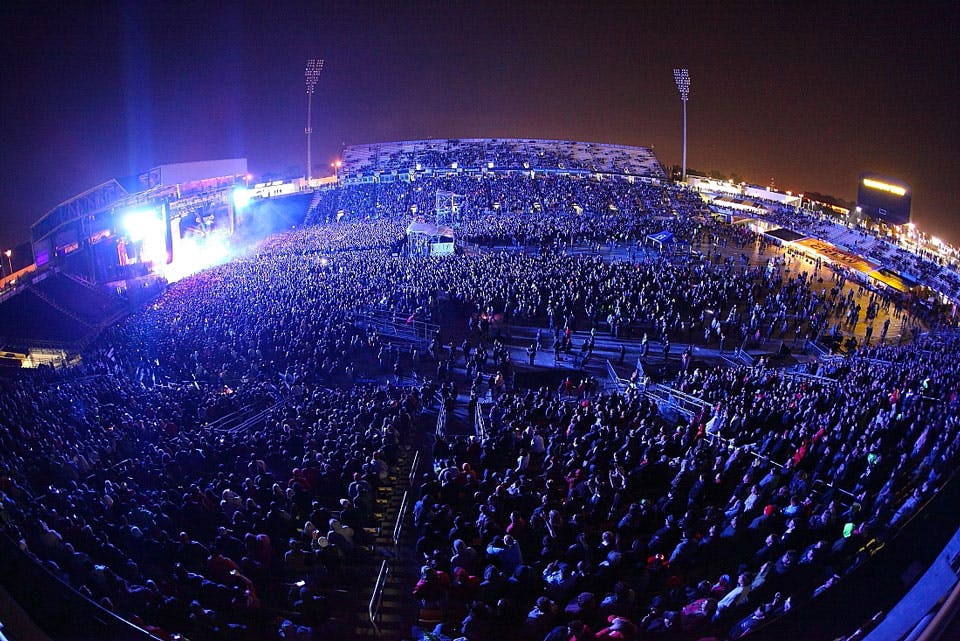 From COSI to Rock on the Range, these Columbus events and attractions are proven winners.

You’re a spy with a crucial mission. The world’s most powerful computer chip has been stolen, and you’ve been tasked with finding it. Along the way, you glide past laser sensors, don night-vision goggles and try your hand at code breaking.

After appearances in Australia and Europe, “Top Secret: License to Spy” is making its North American debut at COSI. The mission-based museum exhibition offers a glimpse into the world of espionage and the practices behind it.

The artifact portion of “Top Secret: License to Spy” showcases that fact with authentic pieces from 20th century U.S. intelligence operations, including a World War II-era cipher machine used to decipher secret messages, a Steinbeck wristwatch outfitted with a miniature hidden camera and the remnants of the U-2 Spy plane shot down by the Soviet Union during the Cold War.

“The exhibit … shows that truth can be stranger than fiction,” says project manager Josh Kessler. “One piece that shows this is the Ghost Army tank.”

The Ghost Army was an American special unit in WWII whose mission was deception. This unit of 1,100 men had the task of impersonating an army of 30,000. To do this, they created fake camps using life-size rubber tanks and drove around while playing audio recordings that sounded like a massive group of tanks rolling through.

The soldiers, who were a group of architects, artists and engineers, would also drive the same truck back and forth through an area German intelligence agents were watching — each time with a different logo painted on its side to create the illusion of a much larger force. “Top Secret: License to Spy” includes a replica of one of the rubber tanks used by the Ghost Army, which had been kept a secret until 1996.

Kessler says one of his favorite artifacts featured is the 40-foot Soviet missile. “It’s so impressive,” he says. “It’s in a big room and it still fills the space. To think about the stories behind it, the engineering that went into making it and the time it took to create it … it’s difficult to escape this sense of place and history in front of pieces like that.”

Don’t Miss: A trip to COSI also offers visitors the opportunity to walk through the streets of the ancient city at the heart of three religions in the National Geographic 3D film “Jerusalem.” This documentary, directed by Daniel Ferguson, glides above Jerusalem and explores caves beneath the Church of the Holy Sepulchre, creating a breathtaking portrait of this historical land. “Top Secret: License to Spy” runs through Sept. 7. Call or visit website for hours and admission prices and options (film requires separate admission); 333 W. Broad St., Columbus 43215, 614/228-2674, cosi.org

Each May, the home of the Columbus Crew professional soccer club transforms into the site of a full-on rock festival that spans an entire weekend. Rock on the Range will once again bring legions of music fans to town May 15 through 17.

The festival’s producers worked on a similar event in Kansas City and wanted to create another one somewhere else in the Midwest. They decided upon Columbus, and nine years later, Rock on the Range is a three-day event that sells out its 40,000 tickets daily.

Linkin Park, Slipknot and Judas Priest are the headliners at this year’s fest, but there are dozens of other bands, including Marilyn Manson and Of Mice & Men. In addition to the music, there is a comedy stage with comedians such as Rob Schneider and Jim Norton, as well as a battle of the bands competition where the winner gets to play on one of the three music stages.

“The festival has evolved and we’ve tried to widen the net of the lineup,” says festival co-executive producer Joe Litvag. “It’s still a hard rock festival, but we add in hip-hop, alternative and metal bands. We focus on elevating the overall experience and expanding the horizon of music for the people.”

Some on-site camping is available for those who want to fully immerse themselves in the festival, but it always sells out quickly. There are, however, hotel packages available for attendees who want to buy their tickets and line up accommodations at the same time.

“Being in a metropolitan area has a lot of advantages,” says Litvag. “If people want to go get dinner in the city or do local activities, they have the ability to do that since we are right in the middle of Columbus.”

As a child of ’80s rock, Litvag says some of his favorite Rock on the Range festivals from years past included performances by Guns N’ Roses and Motley Crue, but he also points out that many musicians have grown along with the festival. “We’ve seen so many bands start out on the third stage and over time been elevated to the main stage,” he says. “It’s pretty incredible.” Visit website for ticket information; 1 Black & Gold Blvd., Columbus 43211, rockontherange.com

Dragon boat races, martial arts performances and a parade of countries are just a few of the attractions at the city’s annual Asian Festival. This year, the vibrant cultural celebration, held at downtown’s Franklin Park, is marking its 21st year May 23 and 24.

The event was launched in 1995 with 12,000 people attending. Now, the two-day affair brings in more than 150,000 guests. “We started the festival with the goal of sharing the traditions and cultures of different Asian countries,” says festival organizer Manju Sankarappa. “We want to promote the importance of cultural diversity by building a vibrant, prosperous and healthy community.”

Each year, the festival showcases two Asian countries. For 2015 those highlighted nations are India and China, although a variety of other Asian countries are featured throughout the celebration.

Visitors can sample an array of Asian cuisines, such as Indonesian satay skewers or Chinese spicy home-style noodles, and children can try their hand at making origami creatures and learn about Japanese printmaking.

Three years ago, the Columbus Zoo and Aquarium had a dream to turn a soybean field into a savanna. Now, a year after its unveiling, the zoo’s Heart of Africa has proven to be one of its most interesting and captivating attractions.

“We wanted the exhibit to be an immersive experience that felt like you were in Africa,” explains the zoo’s CEO and president Tom Stalf. “Being in Columbus, that’s difficult to do.”

But careful planning and more than a year’s worth of construction created an experience that was a hit with zoo visitors. Last year, attendance was up 500,000 over the previous 12 months, says Stalf.

Heart of Africa includes an area to feed giraffes, a cheetah run where visitors can watch the animals reach top speeds while chasing a lure and a shared watering hole where a variety of animals roam freely. The animals at the watering hole change throughout the day, which allows guests to see something different every time they visit. This year, hyenas are being added to the lineup.

The zoo has also added a special-event breakfast called “Sunrise on the Savanna.” Here, visitors can come and be the first to see the animals wake up and roam around the watering hole. It provides an intimate experience and a different perspective.

Stalf says one of his favorite parts of Heart of Africa is the vintage WWII plane that is part of the lion enclosure. The animals hang out next to the plane while visitors take a seat in the cockpit. “I like to stand back and watch as the kids test out the plane,” says Stalf. “It’s always a great hit and really creates some smiles.” Call or visit website for hours and admission prices; 4850 W. Powell Rd., Powell 43065, 614/645-3400, columbuszoo.org

Don’t Miss: Zoombezi Bay waterpark opens for its eighth season on May 16. Located next to the zoo, the park now has 17 slides, a Croctail Creek lazy river ride and more. If you stay after dark on selected summer Fridays, the Wild Tides wave pool hosts Dive-In Movies. Call or visit website for ticket prices (includes zoo admission); opens at 10:30 a.m. and closing times vary throughout the season; 4850 W. Powell Rd., Powell 43065, 614/724-3600, zoombezibay.com

Save The Date
A few other Columbus events to put on your calendar this month:
• Columbus Craft Beer Week: Nine days of great brews capped by the Six One Pour craft beer fest finale. May 1–9, columbusbeerweek.com
• Picture Perfect: This Ohio Wildlife Center family photography workshop offers an opportunity to get up-close photos of native Ohio animals.
May 16, ohiowildlifecenter.org
• The Rolling Stones: Mick, Keith, Charlie and Ronnie are back at The Horseshoe. May 30, ticketmaster.com