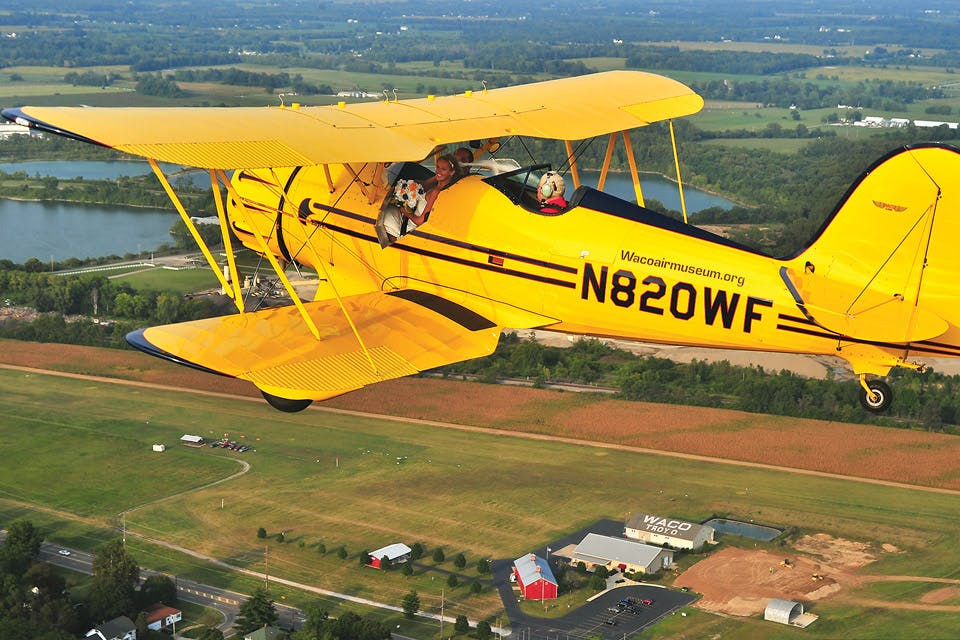 By the late 1920s, WACO Aircraft Co. in Troy was the largest civil-aircraft manufacturer in the country. Today, you can ride in a plane just like the ones once made here.

Biplanes are a throwback to the first half of the 20th century and the decades following the Wright brothers’ initial flights. Troy’s WACO Aircraft Co. was founded during that era, and by the late 1920s, it was the largest civil-aircraft manufacturer in the United States.

“WACO was just a very aerobatic [plane],” explains Gretchen Hawk, executive director of the WACO Air Museum. “It wasn’t the cheapest airplane, but it was the one that pilots really wanted.”

Today, the museum in Troy tells the story of the company and its impact. But some days, you'll see Sunny — a bright yellow biplane — sitting out on the edge of the airfield next to the museum, ready to lift one or two passengers at a time into the sky. Sunny isn’t an antique. WACO Classic Aircraft Co. — a Battle Creek, Michigan, company that makes new planes like the ones once manufactured here — built it in 2004. The aircraft has an open cockpit in the front for passengers, while the pilot sits in a second open cockpit behind them.

Once we’re buckled in, the plane’s engine sputters to life before growing into a roar. As the aircraft gently bounces down the grass runway, its nose starts gradually rising into the air and soon the ground falls away completely. Our pilot follows the Great Miami River up to the Eldean Covered Bridge, before heading out over the patchwork of farm fields that crisscross the rural countryside. All the while, we scan the landscape for the two octagonal barns he told us to look out for. Within several minutes, we’ve spotted the first one.

As the aircraft banks left and then right we get plenty of chances to photograph the landscape passing by below. As the 30-minute flight nears its end, the pilot points us back toward the airfield and gradually spirals us down to a soft landing where we started. The flight is exhilarating and surprisingly peaceful, but it also provides a newfound appreciation for the aviation adventurers who first took to the skies.

WACO Airfield is located at 1865 South County Rd. 25A, Troy 45373. Flights must be scheduled at least 48 hours in advance and are dependent on weather and pilot availability. For more information, call 937/335-9226 or visit wacoairmuseum.org.