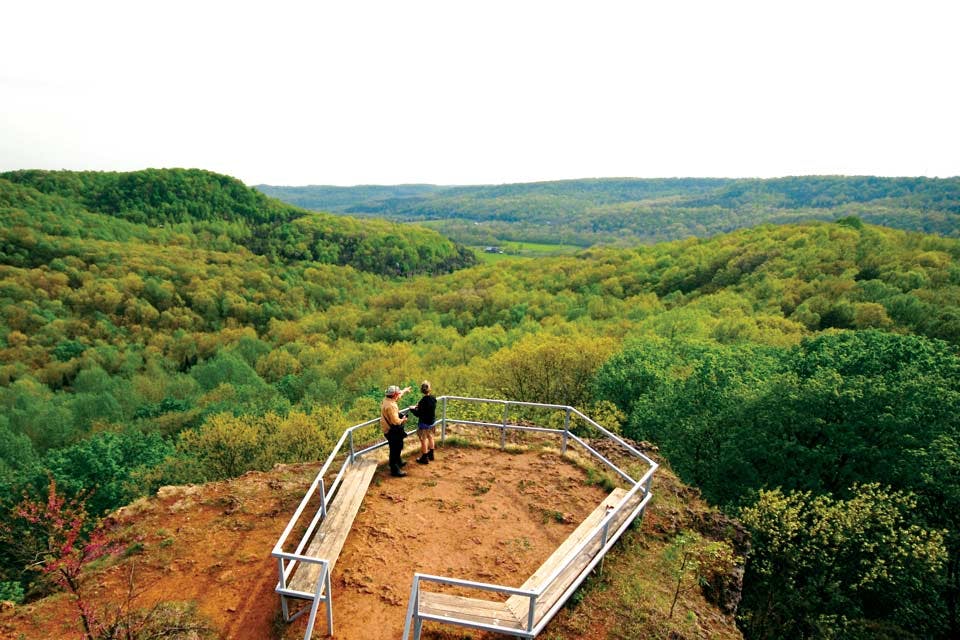 Ohio’s Appalachian counties are filled with hiking adventures. Here are four of our favorites.

July 2018
BY Jill Sell | Photo by Randall Schieber, Courtesy of The Nature Conservancy

July 2018
BY Jill Sell | Photo by Randall Schieber, Courtesy of The Nature Conservancy

The view from the top of Buzzardroost Rock, perched 900 feet above Ohio Brush Creek, is one of the most incredible in the state. Nearly 1,400 plant species have been recorded in the surrounding forests, and the trees here are almost as diversified as those in Great Smoky Mountains National Park, according to Rich McCarty, preserve naturalist for the 18,000-acre Edge of Appalachia Preserve in Adams County.

“We’ve made some trail changes over the past five years to get away from some of the real steep inclines and multiple switchbacks, but it’s still difficult,” McCarty says of Buzzardroost Rock Trail, adding that hikers are likely to see turkeys and black buzzards flying and nesting throughout the park.

Fall is the most popular time to visit because of the colorful oak and hickory forest, but the brilliant greens of emerging leaves in spring and the snow-covered trees in winter are captivating as well. During summer, the trail is covered by foliage, giving hikers a respite from the hot sun.

McCarty also suggests taking the short loop to see Steward Grasslands, a former homestead in a low valley that offers stunning prairie plants, particularly in late summer and fall. But it’s not just botany lovers who are impressed with the area.

“The geology is super interesting. That’s one of the reasons the park is here,” says McCarty of the preserve, which is overseen by The Nature Conservancy. “The trail passes over rocks, so you are up close and personal, but in some places you can look across and see exposed rocks and cliffs.” nature.org 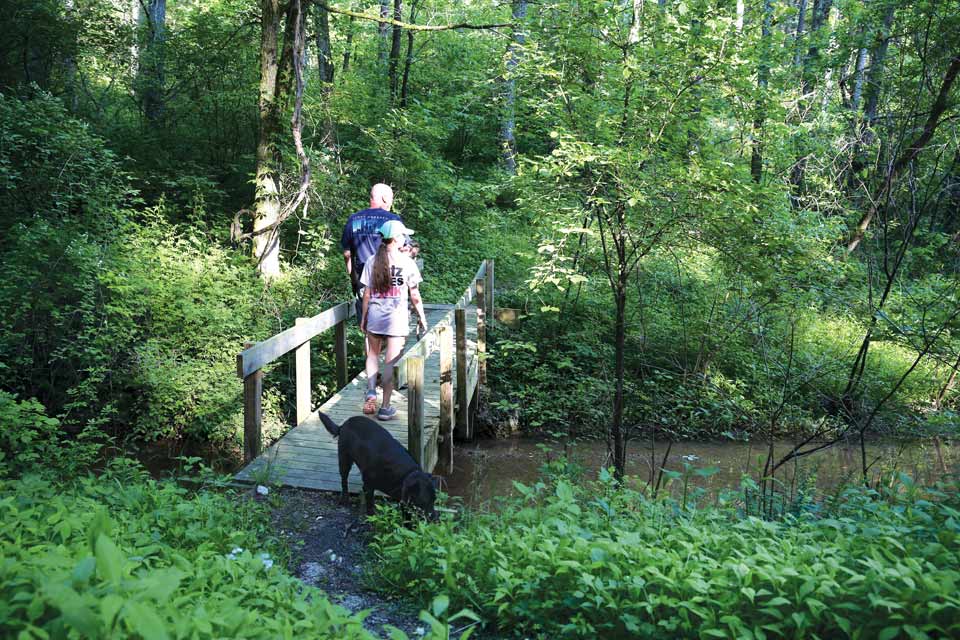 Not much is known about the Lamping family, who lived in this area in the 1800s and whose name identifies this isolated trail. No trace of their homestead is left today, but a small family cemetery filled with weathered tombstones remains.

“Lamping is one of the most remote and peaceful trails in Wayne National Forest,” says Jason Reed, Athens district ranger for Wayne National Forest, which covers more than a quarter million acres and offers more than 300 miles of trails. “It’s lightly used, so it’s a great place for hikers who want to get away from civilization and feel like they are alone in the woods.”

The 2-acre Lamping Pond near the trailhead is stocked with bass, bluegill and catfish, and fishing is permitted with a license. It also attracts a variety of birds, so be sure to bring binoculars with you.

The nearby Clear Fork Creek, a tributary of the Little Muskingum River, is another good fishing spot as well as a great place to cool off by wading in the water.

Along the trail, hikers may encounter white-tailed deer, wild turkeys, squirrels, rabbits and forest songbirds, as well as an array of reptiles and amphibians. Bobcats and black bears have been seen in the area but are very rare. More of a concern is the poison ivy and stinging nettles, so stick to the trail.

Although they’re not much of a problem in dry weather, several stream crossings along the trail have slippery rocks that may present a challenge. Terrain is varied with ravines, deep woods and steep hillsides. Lamping Homestead Recreation Area also offers a show once the sun goes down.

“[It has] some of the darkest night skies in Ohio — perfect for stargazing,” Reed says. fs.fed.us 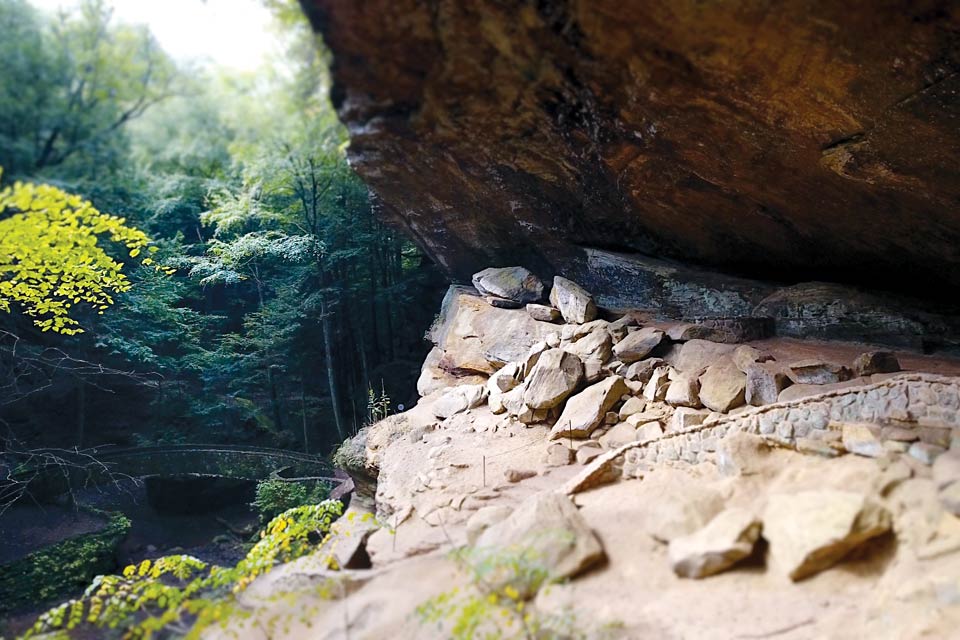 In 1955, Ohioan Emma Gatewood became the first woman to hike the entire Appalachian Trail solo and in one season. This southeast Ohio trail named in her honor extends from Old Man’s Cave to Ash Cave, two of Hocking Hills State Park’s most famous natural landmarks. The hike is also part of the larger Buckeye Trail, the North Country Trail and the American Discovery Trail.

“You go through a gorge, which gives you a view of all the Canadian hemlock, and then up to the top of the ridge, which gives you a true Appalachian heartland forest with beech, maple and oak trees,” says Patrick Quackenbush, naturalist supervisor for Hocking Hills State Park. “You get both types of forest on that trail — a true sense of Appalachia.”

Along the way, hikers encounter Devil’s Bathtub, a swirling pool of water near Old Man’s Cave, multiple waterfalls and an old fire tower.

“You can climb the stairs of the tower, but can’t go into the building,” Quackenbush says. “You get an amazing view. The tower is on a 1,100-foot-high hill and, once up the stairs, you are above the trees.”

If the 10-mile, out-and-back trail is too long, Quackenbush suggests leaving a car at both ends of the hike, so you can see everything while cutting the distance in half. There is no correct way to hike the trail, meaning you can start at either Old Man’s Cave or Ash Cave. Plus, you can bring your dogs with you as long as they are on a leash. parks.ohiodnr.gov/hockinghills 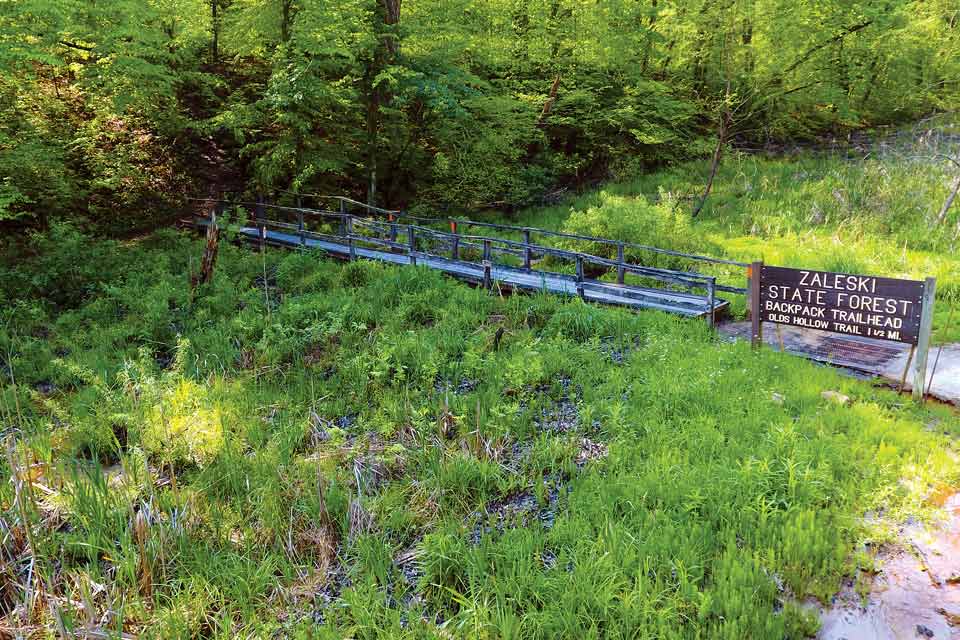 Self-proclaimed “tree nerd” Stephen Rist, District 4 manager for the Ohio Department of Natural Resources’ Division of Forestry, says his favorite part of this trail is where it passes through the 60-acre Doolittle Forest. The area is home to the two largest eastern white pines in the state, and plantings in the area date back to 1906, when the state of Ohio first began to manage forestry efforts.

The trail varies in width, from narrower one-to-two person paths to former service roads 8 feet wide. Hikers pass rock outcroppings with visible drilling marks, reminders of the time when the site was a stone quarry. Also visible from the trail is a ceremonial mound dating to the ancient Adena culture.

“We have a fair amount of small ceremonial mounds in the area, which aren’t marked, but the best one is right by the trail,” says Rist, adding that wild turkeys, spring wildflowers and the beautiful oak and hickory trees are among the area’s sights. If you believe in ghost stories, a former train brakeman killed near Moonville Tunnel is said to still haunt the area, swinging a lantern in the dark of night.

Because the full Zaleski State Forest Backpack Trail covers nearly 29 miles, it’s best for seasoned hikers and campers, although a 10-mile portion of the trail can be hiked in a single day. For those in need of a place to stay, a designated campground is located on the ridgetop and scattered tent locations are available on a first-come, first-served basis. Travelers must bring in their own food and water, and hikers are required to register at trailhead boxes. forestry.ohiodnr.gov