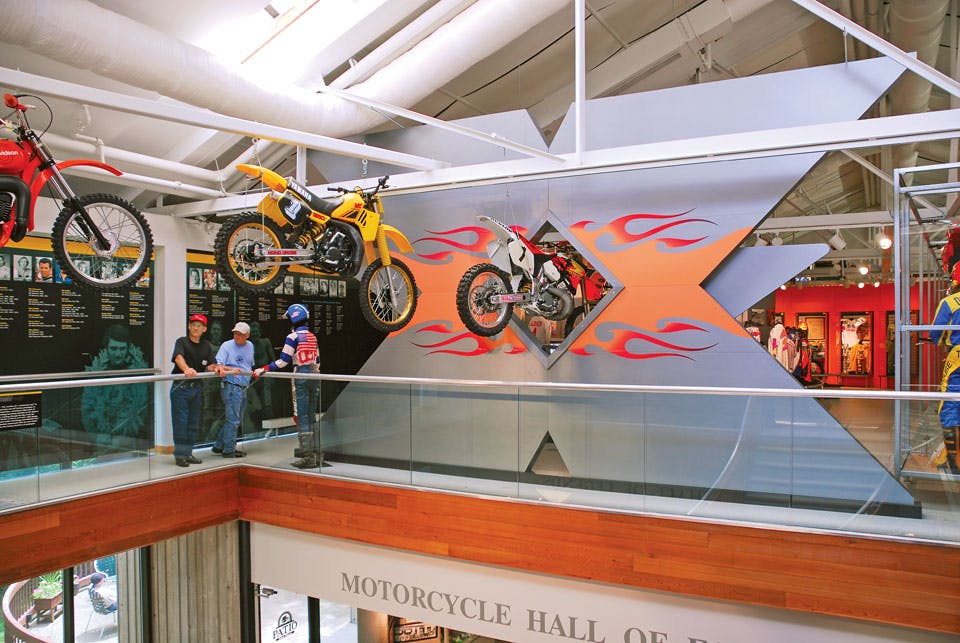 The American Motorcyclist Association operates this tribute to motorcycle and their riders.

Maybe you’re a rebel circa-1965, all denim, leather and open road. Maybe you’re more into bright helmets and stunts, or perhaps you’re all about riding rough terrain. Maybe it’s simply fandom or nostalgia that leads you through the doors of the American Motorcycle Hall of Fame in Pickerington. But no matter the motivation, this place has a bike for everybody.

“All the bikes on the main floor are directly associated with people that have been inducted into the Hall of Fame,” says Jeff Massey, chief operations officer for the American Motorcyclist Association, which operates the attraction. “It’s really as much or more about the people than it is the machines.”

Each year, the American Motorcycle Hall of Fame inducts new members. They’re not all daredevils, although famed stunt rider Evel Knievel is recognized here. Other honorees include motorcycle-rights advocates and longtime ambassadors for the sport. It’s the bikes, though, that seem to grab visitors’ attention the most.

“You never really know what bike is going to strike a chord with what person. So many of them relate to their first bike, or their dad’s bike or grandpa’s bike,” says Massey. “We have this little Honda Trail 50 that is one of the smallest bikes in the collection, and I would bet that there are more people that stop and look and talk about that bike than most any bike in the museum, mainly because it’s the bike that everybody started on.”

The museum even houses a bike that broke a land speed record.

“We’ve had people climb inside of it, close the hatch, and they start tapping immediately because it’s so claustrophobic,” says Massey. “It just looks like a rocket on two wheels.”

The Hall of Fame also offers a virtual-reality experience meant to simulate the feel of riding a motorcycle. But while the museum is a tribute to an adventurous spirit, Massey is a stalwart believer in promoting motorcycle safety. Not only does he recommend a class for first-time riders, but he encourages Hall of Fame visitors to look beyond the replica of Knievel’s stunt bike to inspect some of the famous daredevil’s X-rays, which are also on display.

“You can see all the pins and rods in the bones that he broke,” says Massey. “You don’t want to do what Evel did. Here’s the proof!”