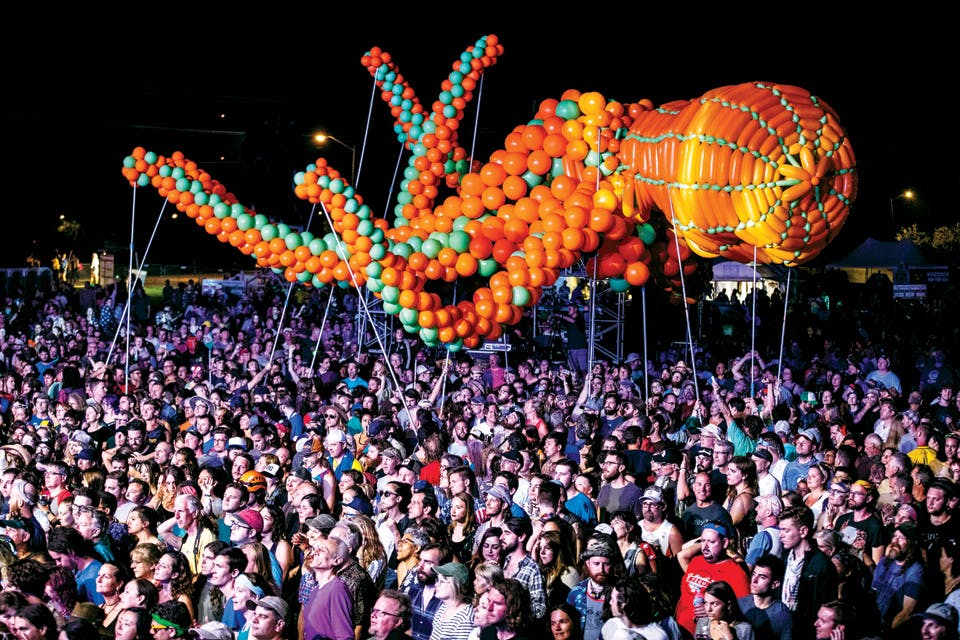 Check out Death Cab for Cutie and many more at the Nelsonville Music Festival , explore the imagination of Jim Henson at COSI and celebrate the recovery of the Cuyahoga River in Cleveland.

May 2019
BY Hallie Rybka | Photo courtesy of Nelsonville Music Festival

May 2019
BY Hallie Rybka | Photo courtesy of Nelsonville Music Festival

6/1: Paint the town red! The 43rd annual Troy Strawberry Festival is bringing “A Berry WACO Weekend” to the historic downtown and Great Miami River levee, with three stages of nonstop entertainment, activities for kids, over 100 arts and crafts exhibitors and, of course, a bunch of strawberry delights. June 1–2, troystrawberryfest.com

6/2: Spread peace and love at the Hessler Street Fair. Now celebrating 50 years, the event offers a mix of music and shopping with a Haight-Ashbury vibe in the city’s University Circle neighborhood. Hessler Court is Cleveland’s only remaining street with wood-block paving: smooth Norfolk pine. June 1–2, hesslerstreetfair.org

6/5: With just a little pixie dust, the tale behind Peter Pan springs to life at Columbus’ Ohio Theatre. Follow the musical, heartwarming adventure of “Finding Neverland” as playwright J.M. Barrie takes a leap of faith and shares the story of a boy who never grows old and a world where nothing is impossible. June 4–9, capa.com

6/6: Nestled in the rolling hills of southeast Ohio, the intimate setting makes the Nelsonville Music Festival feel like a well-kept secret. Celebrating its 15th year, more than 60 musical acts are ready to take the stage, from Death Cab for Cutie and The Breeders to The Wood Brothers and Mavis Staples. June 6–9, nelsonvillefest.org

6/8: Yes, Ohio Stadium is dedicated to the scarlet and gray. But for one day, music is king and cowboy hats are welcome as George Strait, Blake Shelton, Chris Janson, Midland and RaeLynn take the stage for the Buckeye County Superfest. buckeyecountrysuperfest.com

6/9: Whether you’re new to paddling or you’re an expert on the water, the 15th South Bass Island Kayak Rendezvous has plenty of options for exploring the western basin of Lake Erie, from Put-in-Bay Harbor to miles of island coastline. Plus, this annual gathering is just as focused on camping and socializing as it is about getting active. June 7–9, sbikayakrendezvous.com 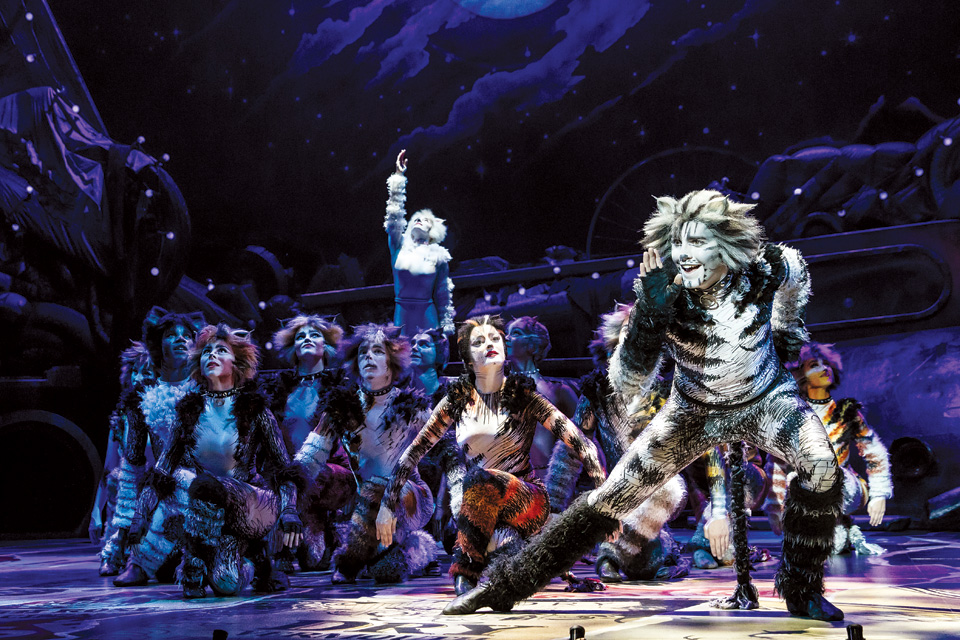 6/11: A new day has begun — and Andrew Lloyd Webber’s “Cats” purrs to life inside Cincinnati’s Aronoff Center. Relive the magic, nostalgia and joy of this record-breaking musical with treasured songs such as “Memory” as it follows a tribe of cats who rejoice at a ball and prepare to decide which feline will be reborn. June 11–16, cincinnatiarts.org

6/12: Celebrate summer, history and community at the Fort Recovery Harvest Jubilee. On Wednesday, the fun kicks off with the Taste of Fort Recovery, where you can sample local eateries and discover new favorites. The fun continues with duck races, inflatables, rides, softball games and live music throughout the weekend. June 12–16, fortrecovery.org

6/13: Sweet 16 is a good excuse to party, and the 16th annual Avon Heritage Duck Tape Festival is rolling into town with all sorts of colorful fun. The toolbox staple gets a new life in a rainbow of hues and takes shape in the form of parade floats, creative sculptures and even some bright fashion. June 13–15, ducktapefestival.com

6/14: Step aboard the Valley Gem sternwheeler and cruise down the Ohio River. Marietta’s annual Jazzin’ Up the Museums benefit features a buffet-style meal and a night of dancing while a live band plays favorite tunes from the ‘40s, ‘50s and ‘60s. mariettamuseums.org

6/15: The Cincinnati Reds are celebrating their 150th season, and there’s no shortage of fanfare. Watch the Reds take on the Texas Rangers at Great American Ball Park. They’ll be sporting the team’s 1935 throwback jerseys, and you can take home a bobblehead tribute to 1990 World Series champion Barry Larkin. mlb.com/reds

6/16: Embrace the open road at the Toledo Museum of Art. Explore how automobiles reshaped America’s landscape, identity and attitudes at “Life is a Highway: Art and American Car Culture,” featuring more than 100 works in a range of visual mediums. June 15–Sept. 15, toledomuseum.org 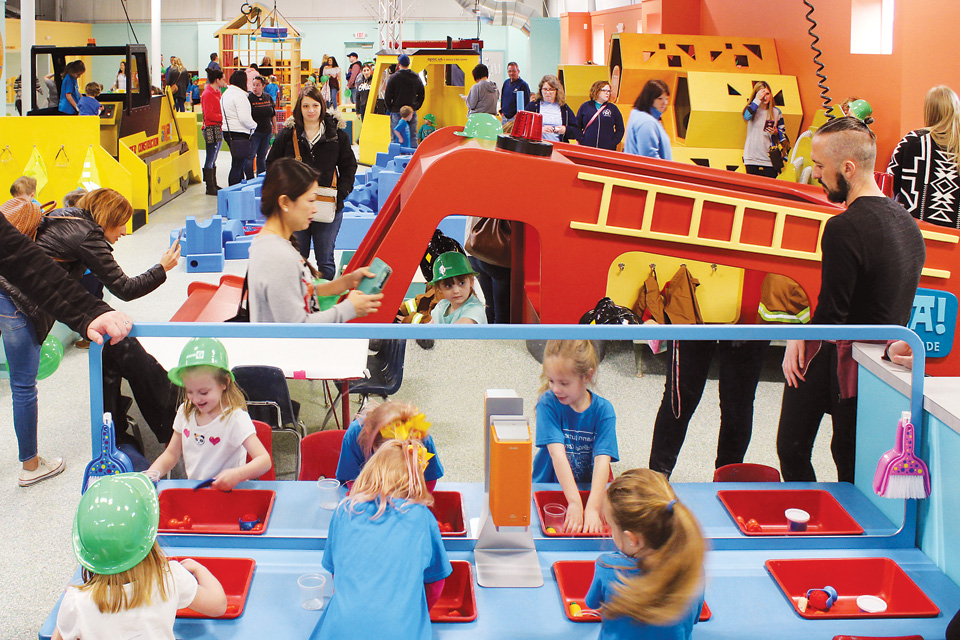 6/17: Curiosity, discovery and imagination guide your little ones at Lancaster’s AHA! A Hands-on Adventure, A Children’s Museum. The interactive escape is home to more than 60 exhibits as well as the new Raymond B. Martens Nature Playscape. aha4kids.org

6/19: It’s about to get saucy at the 61st annual Bucyrus Kiwanis Chicken Barbecue. The grills are fired up for this tradition that brings the town together for a taste they’ve come to expect, and the funds from the barbecue go back into supporting the community. bucyrusohio.com 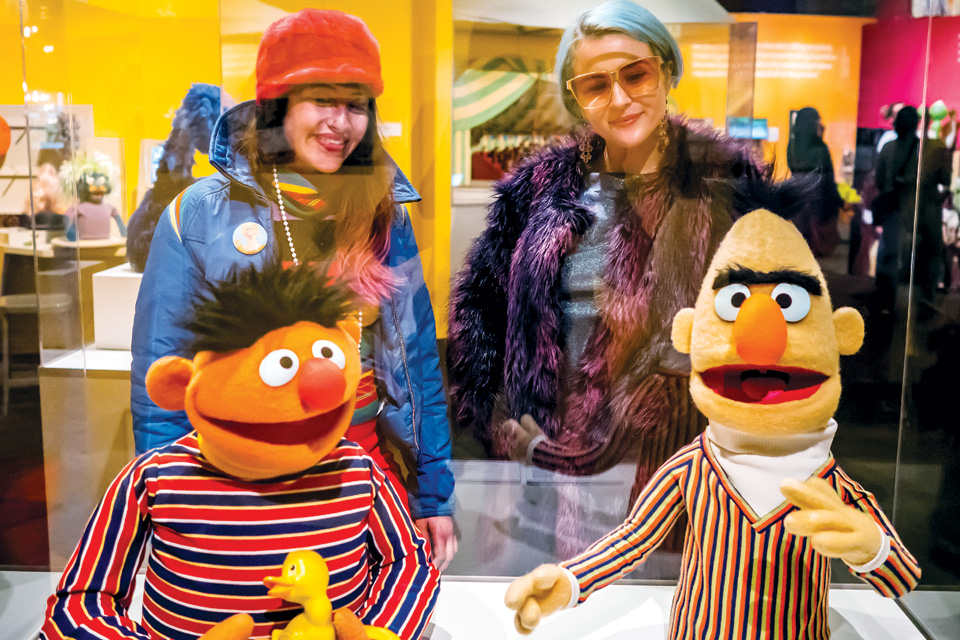 6/20: “The Muppet Show,” “Sesame Street” and “Fraggle Rock” are just a few of the whimsical worlds that populate our memories thanks to the work of Jim Henson. Learn how he and others brought the beloved characters to life and see some of those creations on display at COSI’s “The Jim Henson Exhibition: Imagination Unlimited.” May 25–Sept. 2, cosi.org 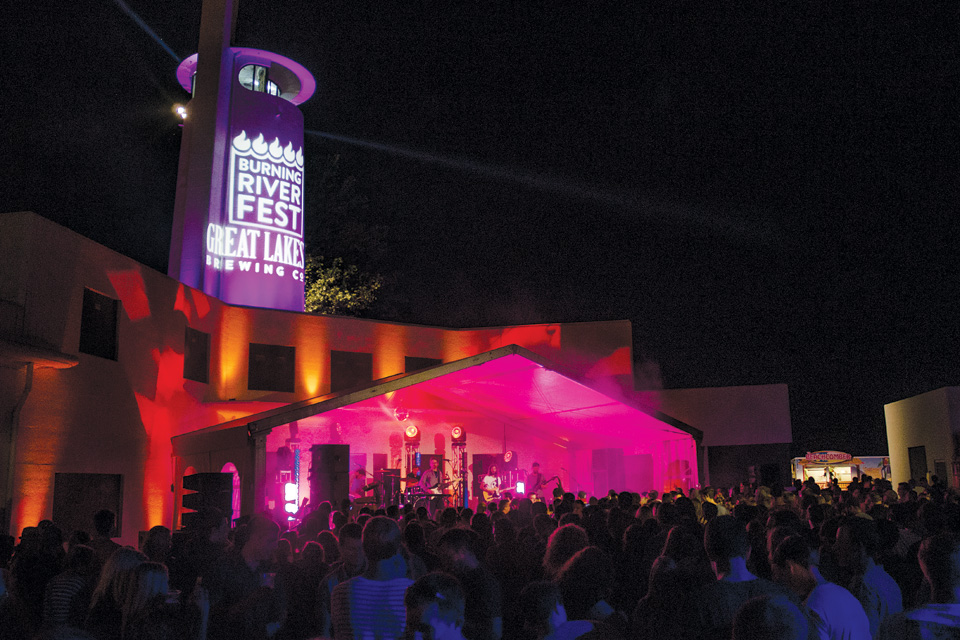 6/22
Sparking a Movement
Half a century after the city of Cleveland’s now-famous river fire made national news, Cuyahoga50 celebrates the environmentally minded thinking the blaze ignited.

The truth is the Cuyahoga River went up in flames more than once due to industrial pollution, but it was a blaze on June 22, 1969, (and a photograph of an earlier fire published a month later in Time magazine) that caught the nation’s attention. The years of cleanup that followed have made the Cuyahoga River an environmental comeback story. This summer’s Cuyahoga50 features nearly four dozen fun and educational events leading up to a weekend of festivities that focus on the progress that has been made.

Burning River Fest: June 21–22: This two-night waterfront event annually hosted by Great Lakes Brewing Co. serves up local music, food trucks and beer, including a special summer release of the brewery’s popular Christmas Ale. Proceeds from the event support the restoration of Cleveland’s freshwater resources. “It’s a giant party for water,” says Matt Gray, chief of sustainability for the city of Cleveland. “You’re on this narrow strip out into the lake, basically, and the bands and activities are out there in this amazing setting for an event.” Historic Cleveland Coast Guard Station, 1000 Cuyahoga River Rd., Cleveland 44113, burningriverfest.org

4 Miles 4 Water: June 22: Featuring a 4-mile race and a 1-mile walk, this festival is both educational and recreational. The length of the race course encourages participants to travel the average distance it takes people in some parts of the world to get water. “Hang out a little bit, eat down there, maybe have a beer and just enjoy being down by the river,” says Erin Huber Rosen, executive director and founder of Drink Local Drink Tap. Nautica Entertainment Complex, 1231 Main Ave., Cleveland 44113, 440/381-6430, drinklocaldrinktap.org

6/24: No, you haven’t left Ohio. But at The Wilds, it’ll feel like you stepped right into a safari. Get close-up views of endangered species from Asia and Africa roaming the 10,000-acre conservation center and safari park. Pack the day with open-air safari tours, zip lining and birding, then relax at the Cabins at Straker Lake. thewilds.columbuszoo.org

6/25: It’s become a summer tradition for O.A.R. to rock the Jacobs Pavilion amphitheater along the banks of Cleveland’s Cuyahoga River. Enjoy hits such as “Love and Memories” as well as tunes from the band’s new album, “The Mighty O.A.R.” American Authors opens the show. livenation.com

6/26: Sometimes it takes surprising ingredients to perfect your recipe for happiness, and that comes in the form of courage and change (and a little serendipity) in “Waitress.” Experience the Tony Award-nominated musical with original music and lyrics by Sara Bareilles at Dayton’s Schuster Center. June 25–30, victoriatheatre.com 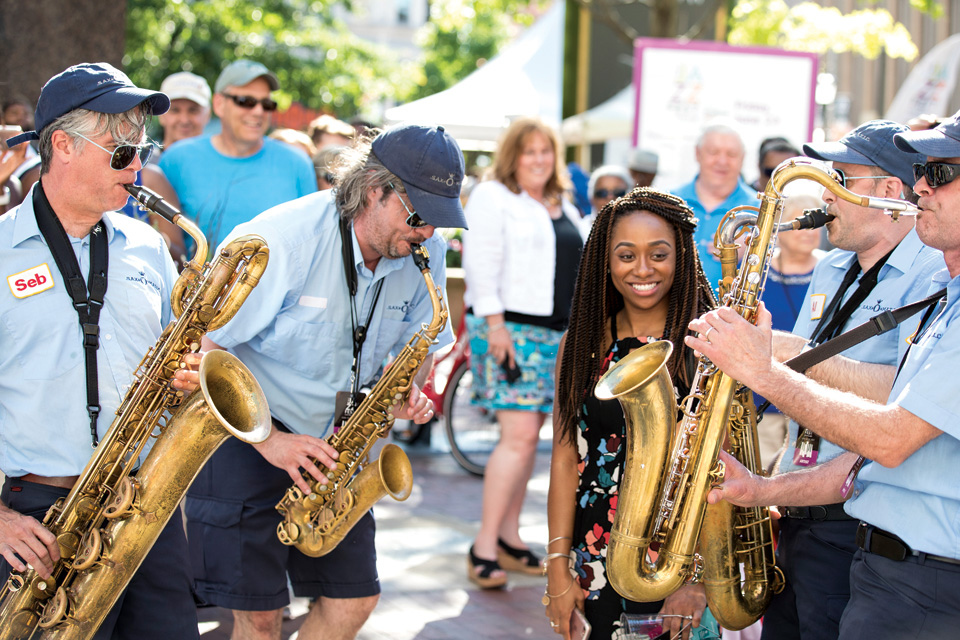 6/27: Tri-C JazzFest Cleveland is still going strong at 40. Playhouse Square’s historic theaters host nine acts, including tributes to Cleveland legends Bobby Womack and Tadd Dameron. On Friday and Saturday, local and regional bands perform live outside, so you can dance along under the world’s largest outdoor chandelier. June 27–29, tri-c.edu/jazzfest

6/28: Tucked amid the tranquility and natural beauty of the Toledo Botanical Garden, the Crosby Festival of the Arts celebrates artistic excellence. Browse works (from painting to sculpture to glass) by more than 200 artists during Ohio’s oldest juried art festival held outdoors. June 28–30, toledogrows.org

6/29: Head to Champaign County for the Historic Home and Garden Tour. Meander through serene gardens, enjoy entertainment and explore a range of architectural styles. You might even be inspired to transform your own abode. June 29–30, ccpapreserveohio.org