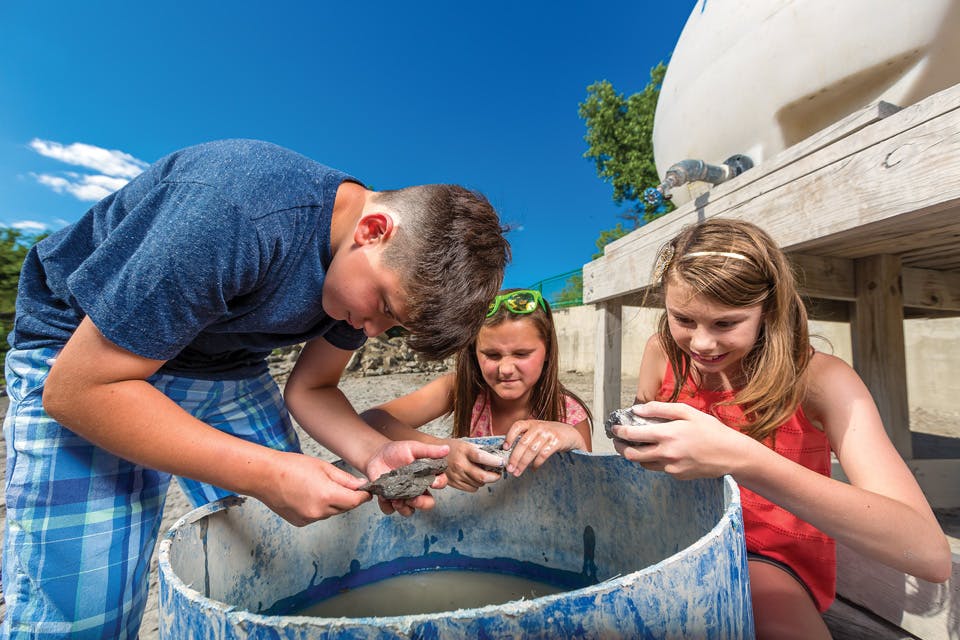 May 2019
BY Hallie Rybka | Photo courtesy of Fossil Park

May 2019
BY Hallie Rybka | Photo courtesy of Fossil Park

7/1: Kids can add brachiopods to their vocabulary (and to their treasure collection) at Fossil Park. The 5-acre rock quarry at Sylvania’s Olander Park System is teeming with fossilized brachiopods, coral and other examples of prehistoric life just waiting to be unearthed. Plus, you can take your discoveries home. olanderpark.com

7/2: Dave Matthews Band returns to Cincinnati’s Riverbend Music Center. The Grammy Award-winning group is beloved for hits such as “Crash Into Me” and “Satellite,” but it’s also known for improvised jamming, so each live performance is a unique experience. riverbend.org 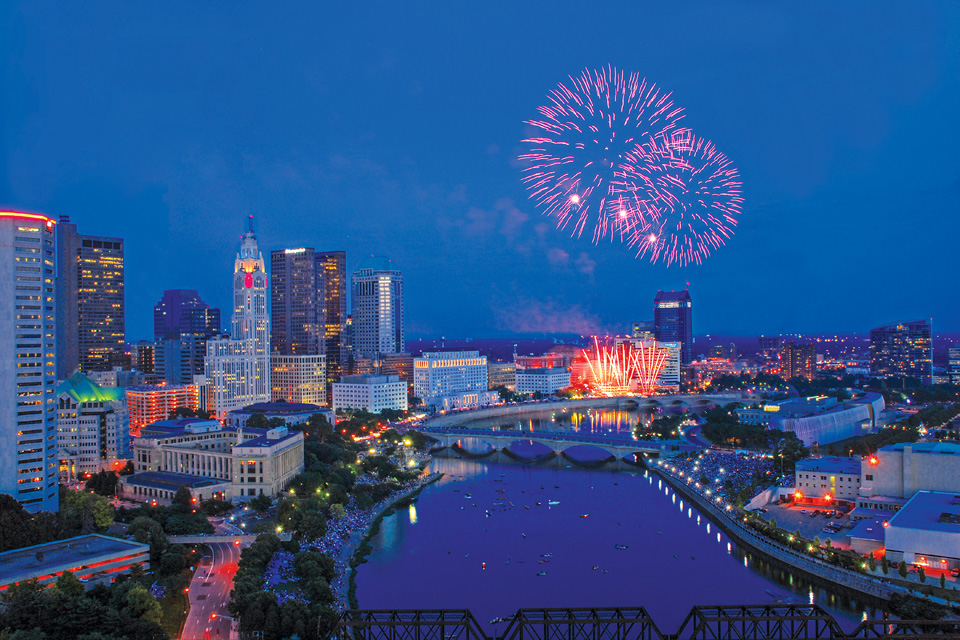 7/4: The Centerville-Washington Township Americana Festival lights up the skies to celebrate Independence Day. Take part in a 5K run, watch the parade, and browse the street fair featuring 300 craft and food booths, artists, live music and a children’s game and activity area. americanafestival.org

7/5: During Sauder Village’s Old-Fashioned Fourth of July Weekend, enjoy a blast from the past while making hand-cranked ice cream, playing croquet, participating in hoop-rolling contests, listening to patriotic songs and watching the naturalization ceremony. July 4–6, saudervillage.org 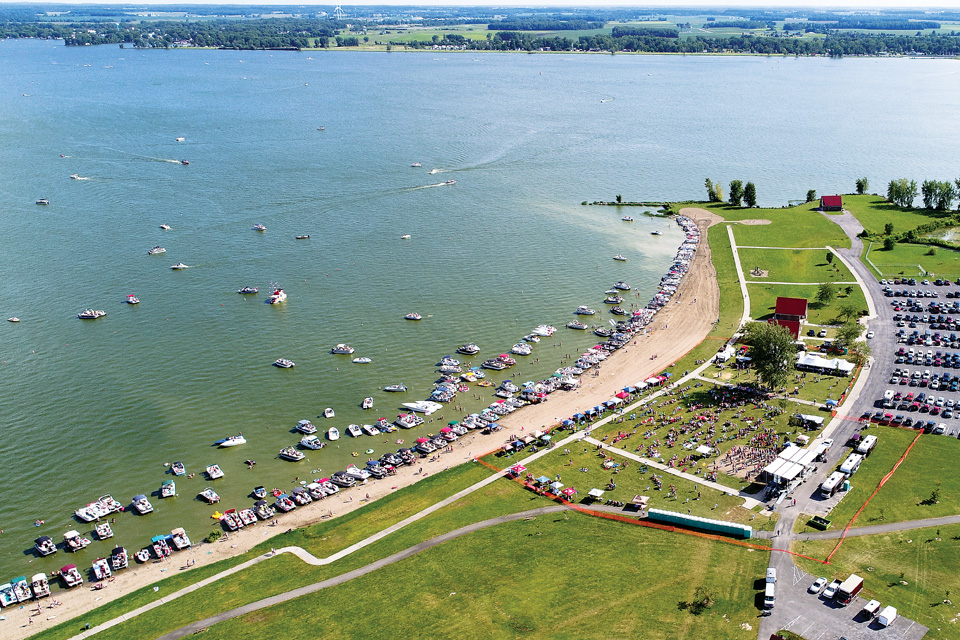 7/7: The Toledo Harbor Lighthouse was first illuminated in May 1904. Today, you can see that original lens at Maumee Bay State Park, which also hosts the Toledo Lighthouse Festival. Honor local history with nautical arts and crafts, entertainment, boat rides and storytelling about this local landmark. July 6–7, toledolighthousefestival.com

7/8: Step straight into history at Historic Roscoe Village. Costumed interpreters bring this 19th-century canal town to life. Board the Monticello III for a horse-drawn canal boat ride, and find treasures at a variety of shops, including River Ridge Leather and Roscoe Village Sweets & Treats. roscoevillage.com

7/10: Competitors at the USRowing National Championships have 20/20 vision — the 2020 Tokyo Olympics, to be specific. East Fork State Park’s Harsha Lake in Clermont County will welcome nearly 2,000 athletes. National champions in the U17, U19 and intermediate and elite/senior categories will compete. July 9–14, usrowing.org

7/11: A quirky and interesting collection of sculptures blossoms across Hartman Rock Garden in Springfield. Crafted by Harry George “Ben” Hartman between 1932 and 1944, the amalgam of visionary art creates a fascinating world complete with a 12-foot castle, a 7-foot Tree of Life and more scenes. hartmanrockgarden.org

7/12:Sip and stay awhile at the Ohio Wine Festival as a collection of Ohio wineries unite at Columbus’ North Market. Sample old and new favorites, relax to ongoing entertainment and browse for tasty treats to carry home with you inside as well as outdoors at Saturday’s farmers market. July 12–13, northmarket.com

7/13: The valley is alive with performing and visual arts at Youngstown State University’s 21st annual Summer Festival of the Arts. A juried art show is at the center of this celebration. It is complemented by dance, theater and jazz concerts as well as the food-focused Festival of Nations and a children’s hands-on art tent. July 13–14, ysu.edu/sfa

7/14: If you’re waiting for pigs to fly, you might get close at Ham Bone Express 3, the hilarious (and adorable) pig racing at the Franklin County Fair. Traditional fair favorites return, too, so fill up on fun with rides and games, a monster truck thrill show, harness racing, a rodeo and more. July 13–20, fcfair.org

7/15: Bottoms up! Ohio Brew Week is back for its 14th year with a lineup of events to remind us that craft beer is booming here. While many Ohio University students head home for the summer, Athens’ breweries, restaurants and bars are in full swing. July 12–20, ohiobrewweek.com 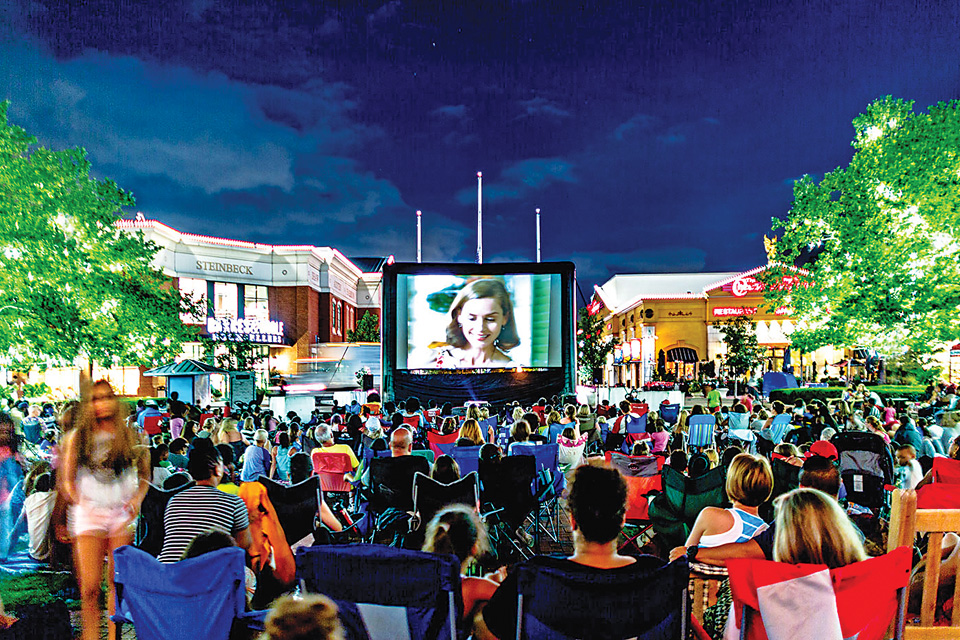 7/16: Grab the popcorn and head outdoors to catch your favorite family flicks under the stars. Movies by Moonlight presents films from recent animated hits to live-action classics on a jumbo screen in the heart of Easton Town Center on Tuesday evenings throughout the summer. June 4–Aug. 27, eastontowncenter.com 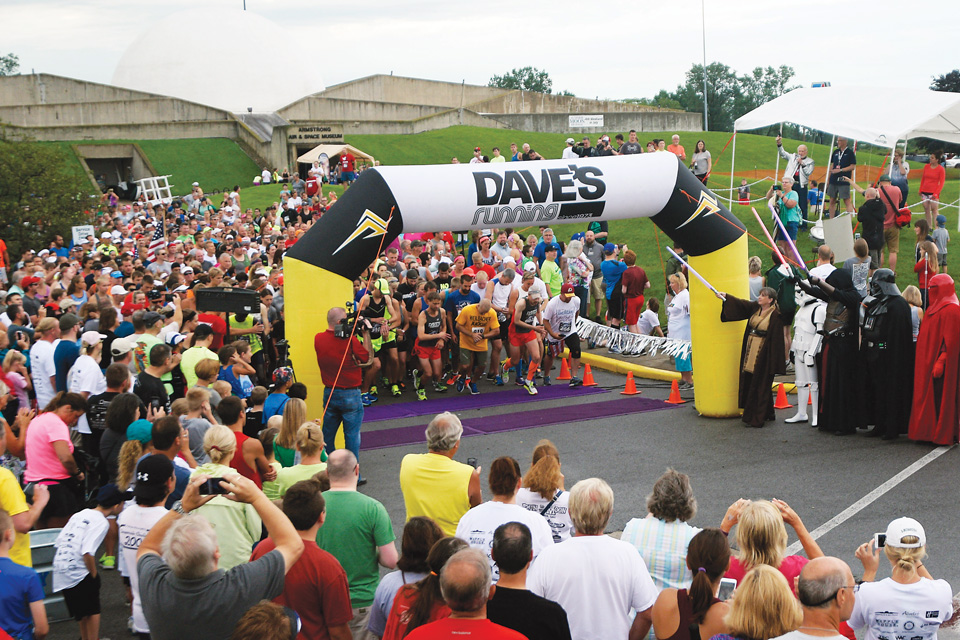 One Small Step
Wapakoneta’s Summer Moon Festival goes big to celebrate the 50th anniversary of the Apollo 11 mission and the legacy of Ohioan Neil Armstrong.

The northwest Ohio town of Wapakoneta isn’t the only Ohio spot astronaut Neil Armstrong has ties to. His family moved 16 times over 14 years, living in Warren and Upper Sandusky before landing in Wapakoneta, the place he would come to call home. That’s where he got his pilot’s license as a teenager (before his driver’s license, in fact), riding his bicycle to the airstrip every morning for flying lessons.

Wapakoneta honors Armstrong’s legacy each year at the Summer Moon Festival. Normally hosted over a weekend, the event is being extended to a 10-day celebration this year, from July 12 to 21, in a grand tribute to the Apollo 11 mission to the moon.

This year, they’re ramping it up to the 1,000th percent, says Donna Grube, executive director of the Greater Grand Lake Region Visitors Center and an Armstrong Air & Space Museum trustee. Festivities are set to take place at the museum and throughout downtown.

The celebration begins with a hot air balloon rally and ends with a performance by the Lima Concert Band. The packed schedule also includes a parade, a summer-fun concert with food trucks, a 1960s-themed day at Wapakoneta WaterPark, model rocket launches, STEM demonstrations, a Neil Armstrong impersonator and the Run to the Moon 5K and 10K.

“Run to the Moon is a huge event, and it’s so fun,” Grube says. “We have astronauts send you off with high fives ... and along the route, there are these outer-space tidbits about planets and moons. So as people run, they learn all about the solar system.”

Festivalgoers can explore downtown to see the world’s largest moon pie and visit the Armstrong Air & Space Museum to see costumed Star Wars characters, presentations by NASA astronauts and interactive science experiments. This year’s event is the culmination of three years of planning, and the event’s organizers wouldn’t have it any other way.

“Five hundred years from now, whose name will people still be putting in the history books?” Grube asks. “The first person on the moon, that’s still such a major event. ... We really wanted to honor Mr. Armstrong and do it in a fun way to get people involved.”

For more information about the Summer Moon Festival and a full schedule of events, visit firstonthemoon.org or summermoonfestival.com.

7/19: Smile ear to ear at the Marietta Sweet Corn Festival. You won’t be able to resist Ohio’s star summer crop at this event honoring the region’s agricultural history with children’s activities, games, an antique merry-go-round, rides and a corn-on-the-cob-eating contest. July 19–20, mariettasweetcorn.com

7/20: Ready for blastoff? The National Museum of the U.S. Air Force is dedicated to aviation and aeronautics, from early flight to military aircraft to space exploration. This month’s Family Day commemorates the 50th anniversary of the Apollo 11 mission with hands-on activities and aerospace demonstrations. nationalmuseum.af.mil 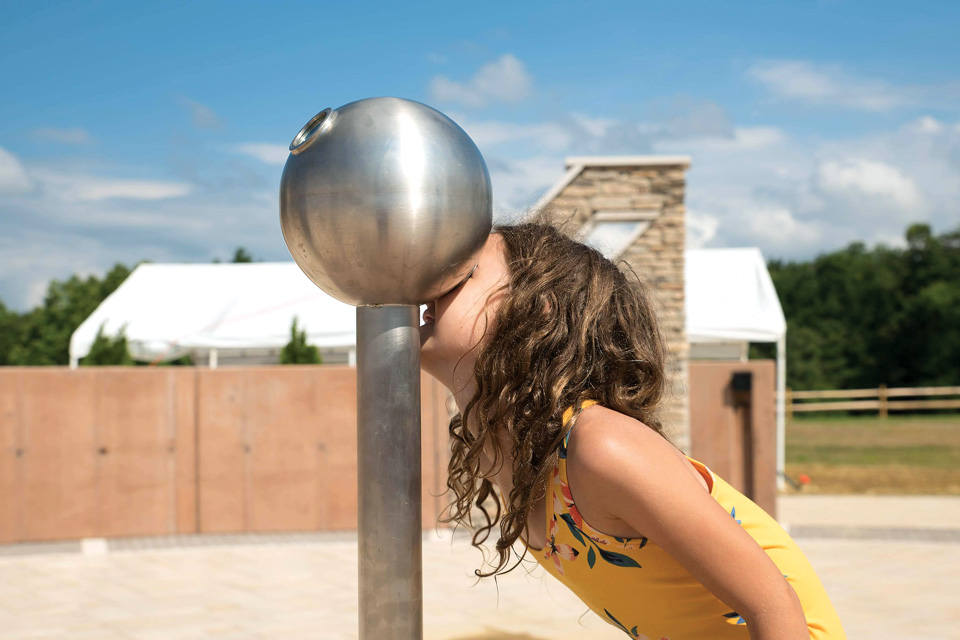 7/21: Leave behind the lights and sounds of city life and revel in the majesty of the constellations above. John Glenn Astronomy Park opened in 2018 and provides visitors to Hocking Hills State Park pristine views of the night sky. Look through the 28-inch telescope during special programs throughout the summer. jgap.info

7/22: The Lancaster Festival continues to hit the right notes. What started as a picnic-and-pops concert in 1984 has grown to a multiple-day festival. Enjoy concerts by the Lancaster Festival Orchestra as well as national acts, fair-style activities and the popular ArtWalk, featuring works by local and regional artists in downtown galleries and businesses. July 17–27, lancasterfestival.org

7/23: Find yourself on an island paradise as the Ohio Light Opera takes on “South Pacific,” the Rodgers and Hammerstein classic that introduced musical theater standards such as “Some Enchanted Evening” and “Younger than Springtime.” This summer, the acclaimed Wooster-based opera company also performs “Into the Woods,” “The Pirates of Penzance” and more. June 15–Aug. 10, ohiolightopera.org

7/24: A little bit rustic and very much modern, Lord Huron performs with an atmospheric quality that appeals to a range of musical tastes. Formed in Los Angeles but with roots in Michigan (hence the name), this indie folk ensemble comes to Express Live! in Columbus. promowestlive.com

7/26: The charming facades of Nelsonville’s historic Public Square are the backdrop to creativity during Circle ’Round the Square and the Final Fridays Art Walk. The town’s businesses, from galleries to shops, swing open their doors and welcome visitors with treats, music and art. facebook.com/nelsonvillefinalfridays 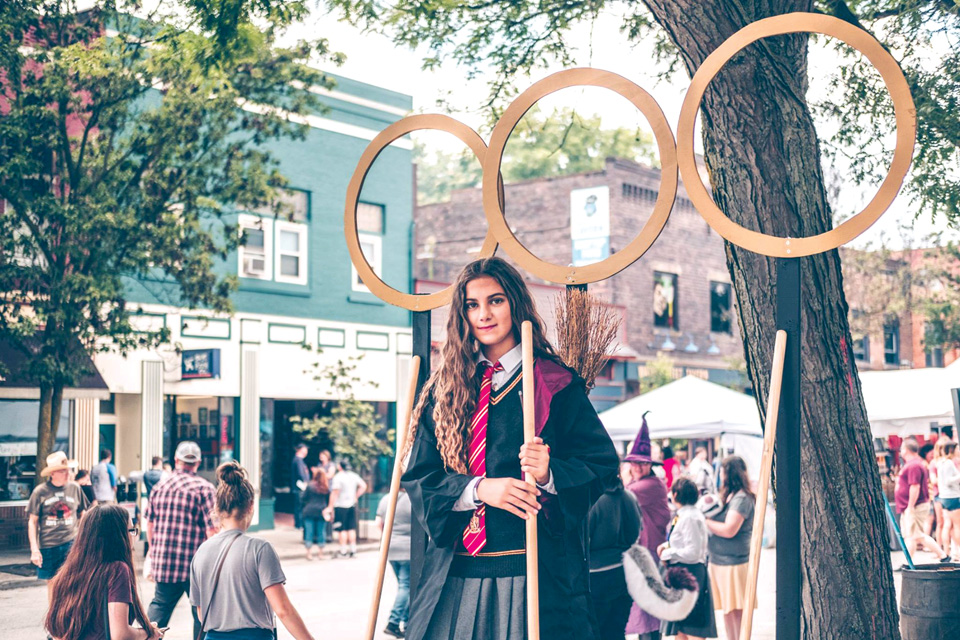 7/27: Muggles, rejoice! Acorn Alley once again morphs into the Diagon Alley of the Harry Potter realm during Wizardly World of Kent. Practice your spells and have your wand ready, this magical event features live entertainment, costume contests, special menu offerings and more that would make Professor Dumbledore proud. mainstreetkent.org

7/29: The Ohio State Fair is back, sparking beloved memories and offering the chance to create new ones. Find your favorites, from thrilling rides to the butter cow, and seek this year’s special events, including performances by Toby Keith and more musical headliners. July 24–Aug. 4, ohiostatefair.com

7/30: Visit a Portsmouth institution for “Moonlighting Making Museums by Day and Art by Night.” Explore works by current and former employees, including the sculptures of Bryan Sieling, now head of design at the National Museum of African American History and Culture. June 29–Aug. 17, somacc.com

7/31: Family is no laughing matter. Well, don’t tell Jim Gaffigan that. The Grammy Award-nominated stand-up comedian brings his highly relatable humor to the Toledo Zoo Amphitheater, where his observations on life and fatherhood turn even the most mundane situations into laugh-out-loud moments. livenation.com