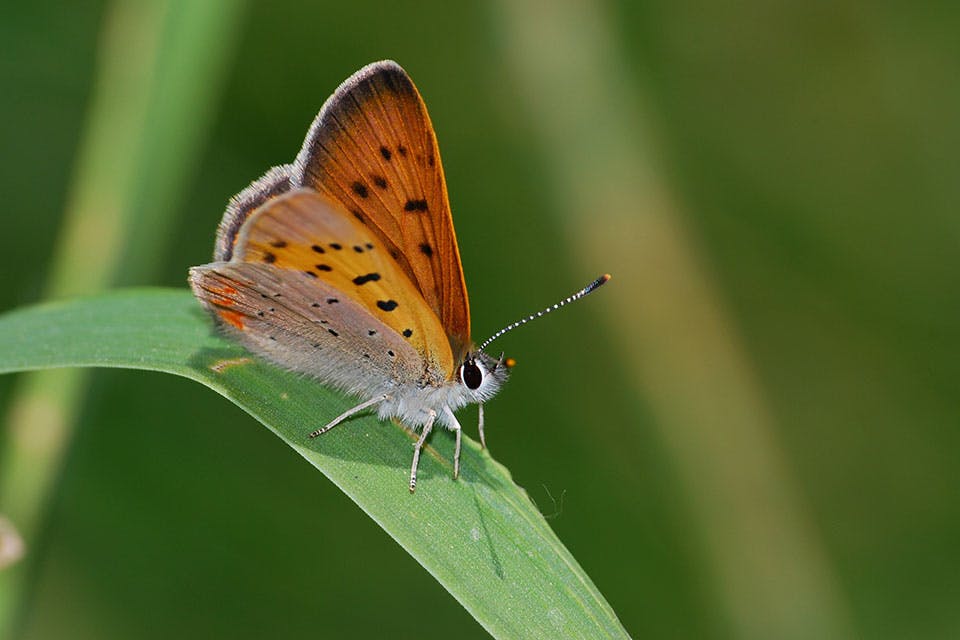 Jerome Wiedmann has learned that you never take your eye off a butterfly when trying to identify it. “Many fly faster than you can walk, and they don’t fly in a straight line,” he says. “So you don’t look down to see where you’re going.”

Of course, this approach has the occasional pitfall, like the time Wiedmann stumbled across a three-foot hole in the ground. He sprained his ankle, but that didn’t deter him from spending hours in the field that day.

“I used my butterfly net as a cane and kept going,” says Wiedmann, coordinator of the Ohio Lepidopterists Long-term Monitoring Program. “By the end of the day I could hardly walk. Fortunately, my car had cruise control so I didn’t have to keep my foot on the accelerator, although I had 250 miles to drive.

“The next day I went out again. I had a cane in one hand and a butterfly net in the other. Some people are just more stubborn than others.”

Clearly, the study of lepidoptera — an order of insects that comprises butterflies and moths — is one of Wiedmann’s passions. The Painesville resident works as a chemist by day, but his interest in butterflies dates back to growing up on the family farm.

“What else can you put into a jar, watch it change into something beautiful and entirely different… and then release it?” he asks.

As a child, Wiedmann used a tin can to catch butterflies that gathered near mud puddles created for the family’s pigs during a drought. Many butterfly species use wet or muddy spots to ingest the nutrients they need to carry out essential life functions.

Wiedmann and fellow researchers throughout the state help provide early conservation alerts based on what they observe in the field. The Ohio Department of Natural Resources and Cleveland Museum of Natural History evaluate the information the group collects.

Aullwood Audubon Center and Farm in Dayton has participated in the Ohio Lepidopterists Program since 2000, five years after it began. It is one of about 70 monitoring sites throughout the state and a location of one of Wiedmann’s butterfly identification workshops. 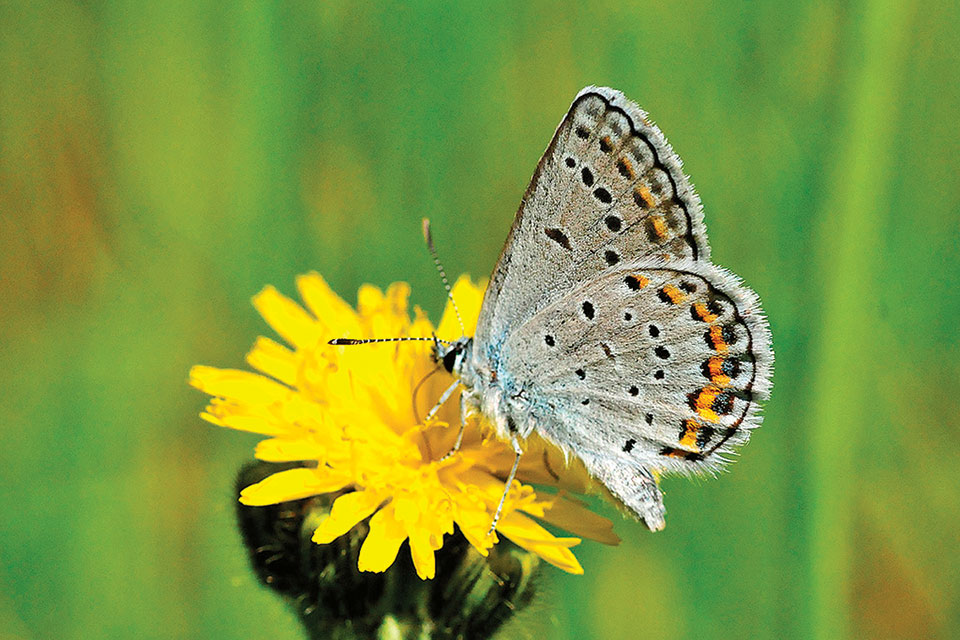 Sarah Alverson, Aullwood’s environmental education and land management specialist, and others participate in weekly counts during warm-weather months. To complete a Pollard Transect Walk — a fancy name for a butterfly safari — monitors follow a predetermined path from April through October.

They are encouraged to take field notes and photos, addressing weather conditions and other factors. Volunteers count butterflies they see within 7 1/2 feet on both sides on them, as well as 15 feet in front and 15 feet above them. Any farther makes it impossible to see smaller butterflies.

“I struggle with identifying skippers; they challenge me,” confesses Alverson, referring to a butterfly family that is fast, brown and look similar to one another. “You really have to get a good look at them to know what they are. But it helps where they land because different species prefer different plants.”

Even if a volunteer can’t identify a particular butterfly, just pointing it out to someone who can helps. Aullwood Audobon Center volunteers also participate in the North American Butterfly Association’s Fourth of July Count, which tallies butterflies within a 15-mile diameter.

Wiedmann participates in the July count and helps monitor monarch butterflies. A couple of times, he’s tagged 200 of the black-and-orange beauties in one afternoon. The tiny tags don’t interfere with a butterfly’s flight, and the identification system helps researchers track how monarchs migrate from the Great Lakes to the Gulf of Mexico and back — a round trip that spans several butterfly generations.

But monarchs aren’t the only butterflies that migrate. Wiedmann says the migratory behavior of some smaller butterflies, including red admirals, is just as miraculous. Also, when there is less food for insects to eat during droughts, he says some butterflies mature to a smaller size than normal, requiring less nourishment to survive. 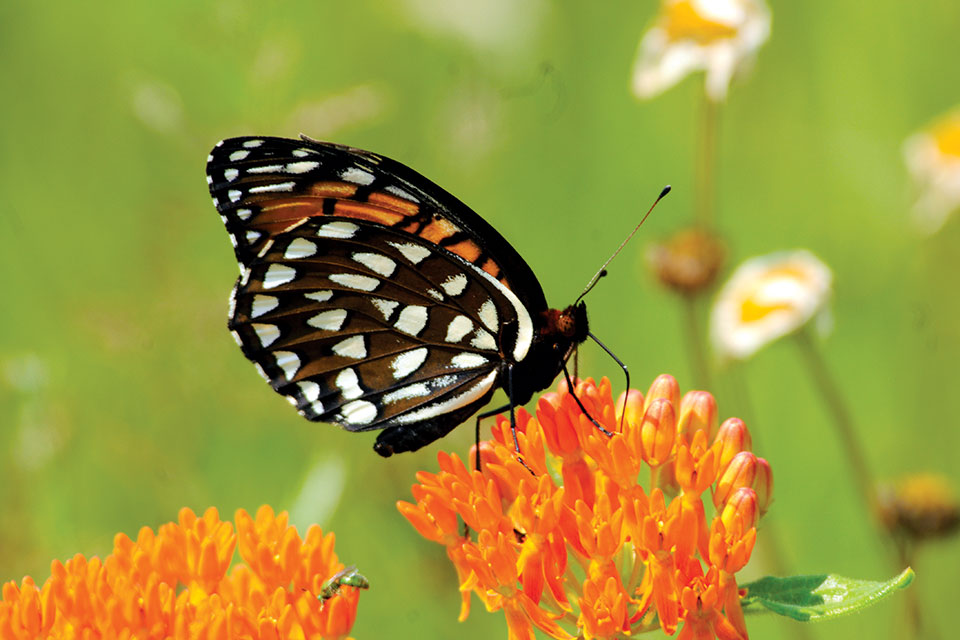 According to Wiedmann, Ohio’s three most common butterflies include European cabbage white, which can be a destructive vegetable garden pest; the native Ohio pearl crescent, orange with black borders; and the burnt orange European skipper.

“As a state, we are doing fairly well in providing decent habitat, not just for butterflies and skippers, but for all species associated with that habitat community,” says Carolyn Caldwell, ODNR’s recently retired terrestrial endangered species and wildlife diversity administrator. “But things are vulnerable. You can have catastrophes.”

Wiedmann says 2012 was an excellent year for butterflies in Ohio, especially migratory species. The monitoring program recorded its 1 millionth butterfly that year. But 2013 saw few migrating butterflies in the state and roughly half of the amount of butterflies compared to the previous year. Wiedmann predicts 2014 will also be “very thin” for the migrating insects. He says prolonged wet summers, cold springs and an increase in predators all take a toll on the beautiful insects that bring such joy to our gardens.

“And anyone who has a green, golf-courselike lawn isn’t helping,” adds Wiedmann. “All those herbicides to kill dandelions are also killing the nectar sources that supply a lot of little butterflies.” Educating people about habitats will help populations over time, says Alverson. And while most of us observe butterflies that flit through our field of view with little thought about where they are going or where they have been, she says there are rewards for those who devote time to observing them.

“One year, I saw a zebra swallowtail,” Alverson recalls. “We don’t see a ton of them here. But this was a female [laying an egg] on a leaf. That was neat. We tried to keep an eye on the egg, but it just kind of blended in and disappeared. But it was exciting and something I probably won’t ever see again.”