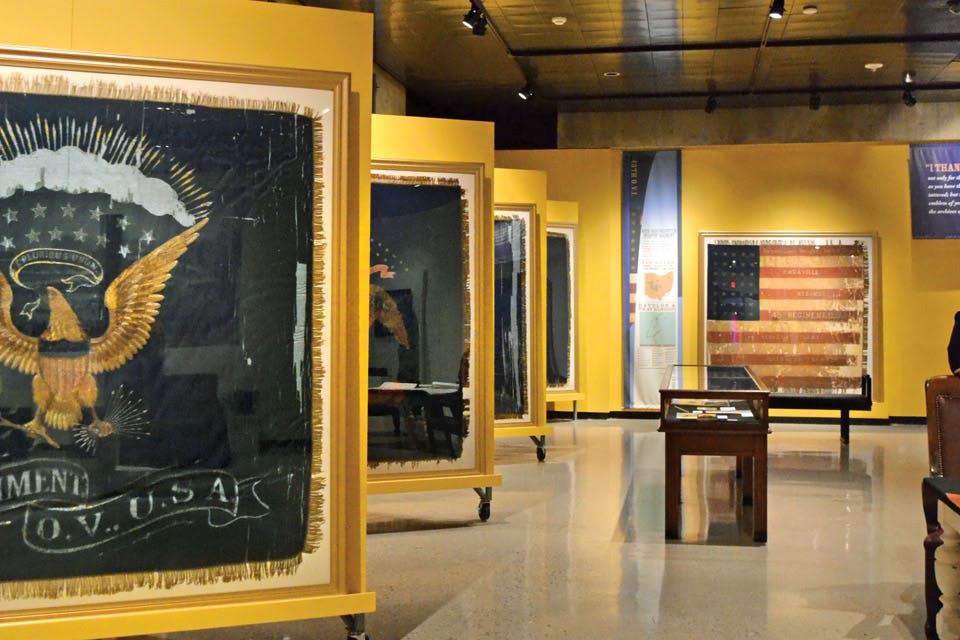 Travel Through Time at the Ohio History Center

This museum outside downtown Columbus is the keeper of our state’s history and heritage, with a vast collection that offers insight into who we are.

Many times driving south on Interstate 71, I would see the Ohio History Center and think, I really should go there someday. Although the boxy, gray structure was completed in 1970, it was years before I finally stepped inside.

To be fair, I was usually in a hurry when I passed by, but the building isn’t exactly inviting. The imposing structure is an example of Brutalist architecture, an unadorned style that rose to prominence in the mid-20th century. When it was completed, Architectural Record called it “the most architecturally significant public structure built in Ohio” since the Ohio Statehouse. I won’t argue with that, and once you get past the building’s bulky exterior, you’ll find the very soul of our state contained inside.

The Ohio History Connection, which operates the museum, owns nearly 2 million artifacts (although just a fraction is on view at any one time) spanning natural history, culture and archaeological collections. It’s easy to see why kids love the huge skeleton of the Conway Mastodon, which roamed our state during the Ice Age (this one got stuck in a swamp on the border of Champaign and Clark counties), and I appreciate the artifacts and displays that share what we do know about Ohio’s ancient mound-building peoples.

But I’m most drawn to the everyday objects: ones used in pioneer times, during the war years and right up to my lifetime, be it a lantern from a one-room cabin or a Firestone tire made in Akron. One of my favorite pieces is a lady’s desk crafted in Portage County between 1820 and 1840. It is a simple piece of furniture, but I wonder about the woman who sat at it. Did she use the desk to write letters to a relative or perhaps a secret love

Among the most poignant Ohio History Center artifacts are the authentic Civil War flags carried in battle by Ohio military companies. Ten are displayed behind glass, while others are stored in a climate-controlled case. If you are lucky enough to visit the gallery when a staff member opens it, take a sniff to see if you can pick up on the ever-so-faint hints of battlefield smoke that still cling to the flags’ fabric.

The Ohio History Center has never been an institution to shy away from subjects that stir deep emotions. In 2011, the exhibition “Controversy: Pieces You Don’t Normally See” included Old Sparky, the nickname for the wooden electric chair the state used to execute 315 people between 1897 and 1963. It is a jarring artifact, no doubt, but also one that shows Ohio history is not all canal boats and hardwood forests.

In many ways, this is the Ohio History Center’s greatest strength: We learn who we were, who we are and maybe even get a hint of who we want to become. The museum unites us, whether we live along the lakefront, in farm country or in the hills of Appalachia. It offers a deeper understanding of what it means to be an Ohioan by shining a light on the rich history we all share. 800 E. 17th Ave., Columbus 43211, 614/297-2300, ohiohistory.org