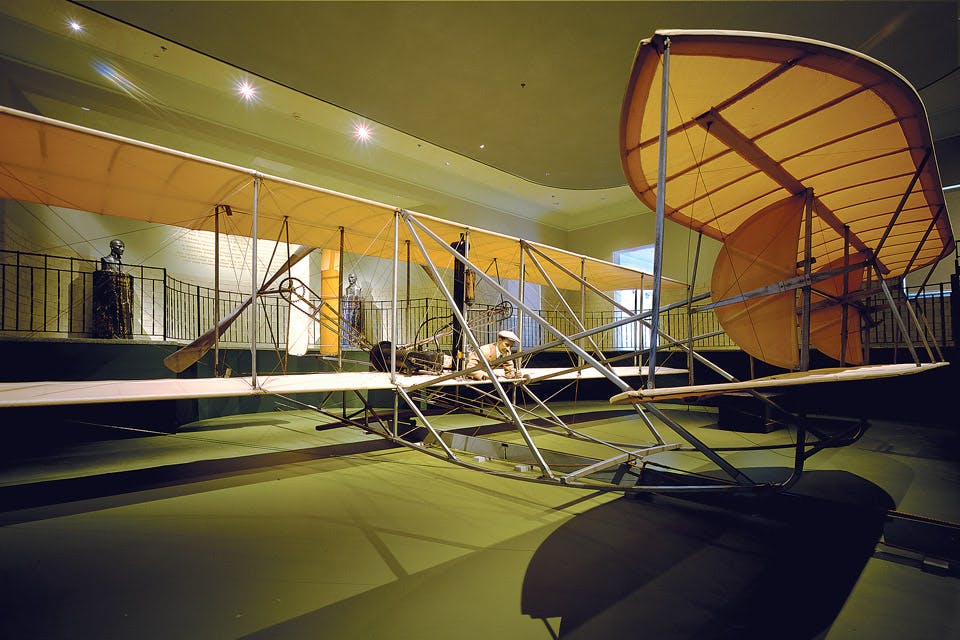 Take a closer look at the flying machine the Wright brothers called their most significant invention in a building built specially for it.

Orville Wright was a lifelong tinkerer, and his last undertaking was a grand one. In 1946, his friend Edward Deeds, a Dayton industrialist who worked with Charles Kettering to invent the automobile self-starter, announced plans for Carillon Historical Park, a new museum celebrating the region’s revolutionary role in transportation history.

The Wright brothers would be highlighted at the new Dayton attraction, and Deeds proposed building a replica of their 1903 Wright Flyer for display. Orville had a different idea: The 1905 Wright Flyer III was in storage, although it needed some restoration. Deeds jumped at the thought. Not only did the plane fly in Dayton (taking off and landing from a small cow pasture known as Huffman Prairie), Orville considered it the most important aircraft he and his brother had ever built.

The 1905 Wright Flyer III is considered the world’s first practical airplane. The Wright brothers’ 1903 design that flew at Kitty Hawk, North Carolina, was airborne for less than a minute during each of its four B-line flights (Orville was the pilot during the first one), and a reimagined 1904 version failed to fix significant control issues. But the brothers’ 1905 craft could turn figure eights, land and take off again. On Oct. 5, 1905, Wilbur flew the plane for nearly 40 minutes — so long he ran out of gas.

Orville oversaw the restoration of his Wright Flyer III and helped design Wright Hall, the building that houses the plane at Carillon Historical Park. Visitors encounter the legendary machine displayed in an open pit, offering an impressive view of the plane’s more than 40-foot wingspan. This was Orville’s idea. His wish was that visitors look down on the plane to understand how the controls really work. Today, a figure of Wilbur lies flat on his stomach across the middle of the machine. There was no seat. Instead, the pilot was nestled in a hip cradle, with a joystick-like mechanism in his left hand and a paddle-like mechanism in his right. Together, they controlled the plane’s three primary axes: roll, pitch and yaw.

When the Smithsonian debuted the 1903 Wright Flyer in December 1948 on the 45th anniversary of flight, it hung from the ceiling. Many planes were displayed this way during Orville’s time. But at Carillon Historical Park, visitors stand within a few feet of the aircraft. Like a massive bird spreading its wings across an open abyss, the machine has a primitive magic to it — one that is palpable the moment you enter Wright Hall.

In 1990, the Wright Flyer III became the only airplane ever to be designated a National Historic Landmark. Shortly after, in 1992, the historic aircraft became part of the newly created Dayton Aviation Heritage National Historical Park.

Orville didn’t live to see the public enjoy Wright Hall. He died on Jan. 30, 1948, more than two years before Carillon Historical Park opened. When it did on June 3, 1950, crowds swarmed the city’s new attraction, and Wright Hall in particular, eager to catch a glimpse of the newly restored plane that changed everything — the world’s first pilot’s last project. 1000 Carillon Blvd., Dayton 45409, 937/293-2841, daytonhistory.org