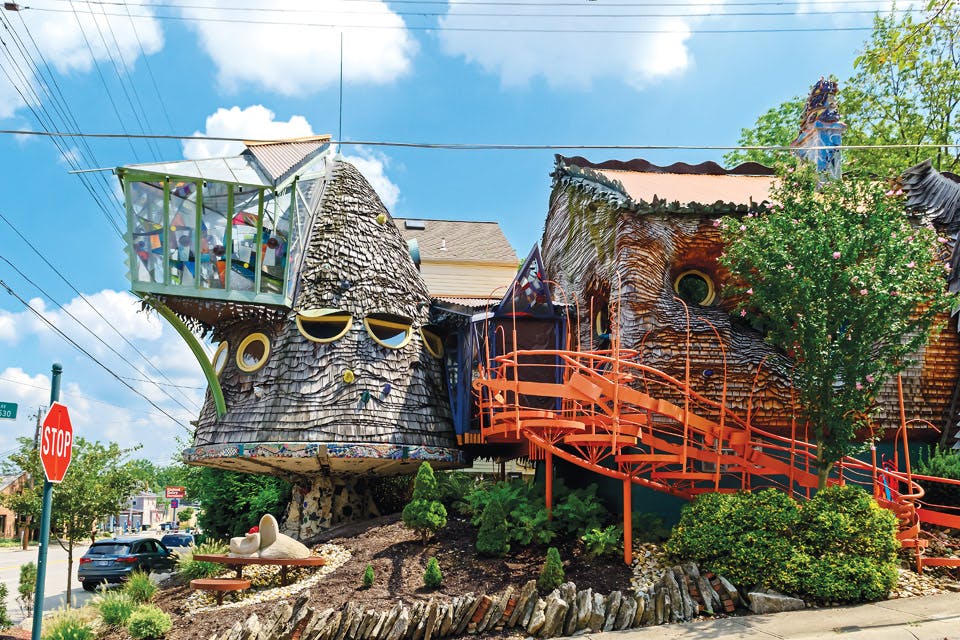 Architect Terry Brown’s landmark is the result of a lifetime of inspiration and more than a decade of construction.

At the corner of Tarpis and Erie avenues, down the street from trendy eateries and a 10-minute walk from the Cincinnati Observatory, sits a house that looks plucked out of a children’s fairy tale.

Porthole windows are inset against a swirling, cedar-shingled exterior, while a glass room juts from a cone-shaped addition to the main structure, and an orange metal staircase winds up to a breezeway between the home’s two parts. This is the Mushroom House, a product of late architect Terry Brown’s lifetime of design and inspiration and more than a decade of construction.

“That was his architecture studio,” explains Paul Lashua, a friend of Brown and part of the project since its inception in 1992. “It was just a small bungalow house to begin with.”

Brown hailed from Iowa, and the more he practiced his trade, the more he realized how connected space and people are. Lashua explains that his approach was to create smaller structures that featured intimate spaces people can relate to.

“That’s how he was defining architecture, not as these big buildings that don’t relate to human dimension or human activity,” adds Lashua.

What appears to passersby as a magical, sort of flowing structure is actually the result of meticulous drawings and hard geometry.

“It was really experiential and experimental architecture at the same time,” Lashua explains. “He was looking at using materials in a way that they might not be typically used, either as a material itself or in combination with other materials. I think that’s why it takes on such a sculptural flavor.”

With help from a team of metalworkers, glass artists and his architecture students from the University of Cincinnati, Brown reworked what was once a Midwestern cottage into a studio of unique components, from the layers (in some places 10 inches thick) of hand-cut shingles to bright swatches of stained glass.

Following Brown’s death in 2010, Lashua and others continue to care for the privately owned property that has become a Cincinnati landmark.

“He took that building and that became a life’s work for him,” says Lashua. “It was a work in progress. It morphed. It was very much a process of design and building.”