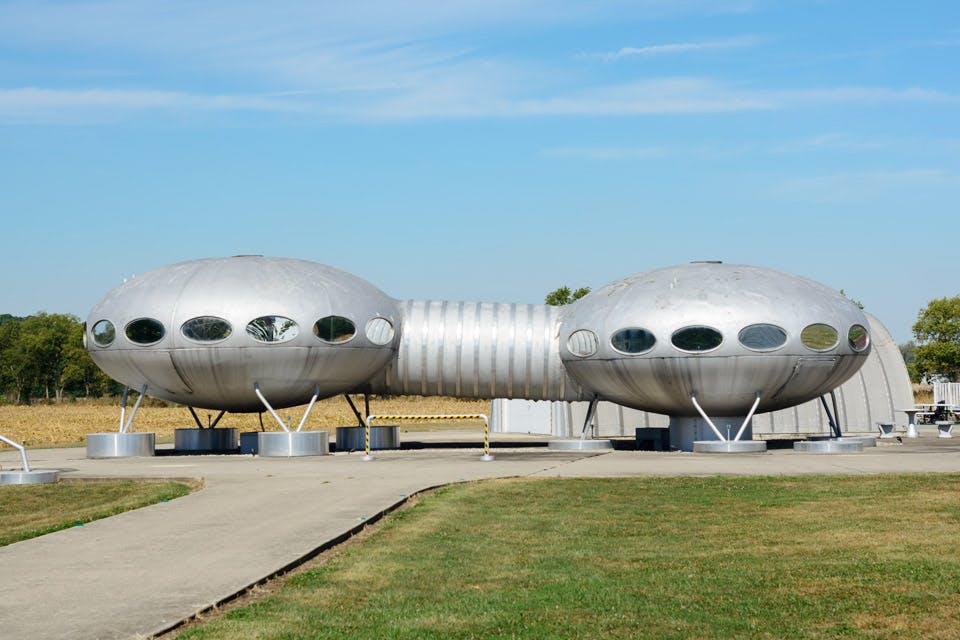 This short-lived design for a space-age abode lives on in Carlisle, Ohio.

As you near Carlisle, Ohio, on state Route 123, the scenery becomes a little extraterrestrial. Located among the country homes and open fields are what appears to be two flying saucers joined by a tubular walkway.

The gray pods give the feel of a B-movie space invasion, but the private residence is actually a rare example of a short-lived futuristic design. In 1965, Finnish architect Matti Suuronen began drafting plans for a custom ski chalet that was lightweight, easy to heat and simple to transport.

“He always said it was based on the number pi — the design was mathematical rather than prompted by spaceships and flying saucers,” says Simon Robson, owner of the website thefuturohouse.com. Suuronen’s prototype first garnered press in 1968, when sighted aboard a Finnish ship docking in London. Nearly two dozen companies signed on with plans to manufacture the 26-foot-wide, 14-foot-tall prefabricated homes. But at the cusp of mass production, Futuro hit a speed bump.

“We ran into the oil crisis, and the price of oil tripled, and that meant the price of plastic tripled. The bubble burst,” says Robson. “We think somewhere between 80 to 100 were manufactured worldwide.”

Robson says it is believed only about 20 of those homes are in the United States today. While some fell into disrepair, a few made their way into museums and still others are today private homes, including the one in Carlisle. Each Futuro House features a modest kitchen and small bathroom and bedroom, but, at the time of its release, it was described as roomy enough for eight people.

“There were eight bed-chair units set around the curve,” says Robson. “You would need to be really, really close with those eight people to want to live in one of those things, because they are not that big.”

This Futuro House is a private residence. It is located at 9961 Central Ave., Carlisle 45005. For more information about the history of The Futuro House, visit thefuturohouse.com.