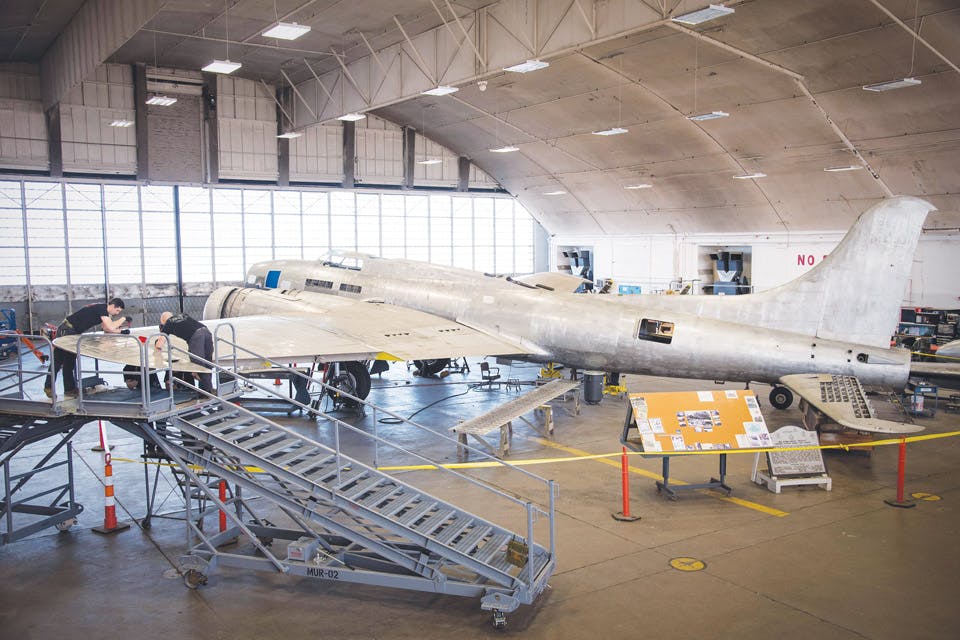 The celebrated World War II flyer moves closer to being displayed at the National Museum of the United States Air Force near Dayton.

May 2017 Issue
BY Nathan Havenner | Photo courtesy of National Museum of the U.S. Air Force

May 2017 Issue
BY Nathan Havenner | Photo courtesy of National Museum of the U.S. Air Force

When engineers at Boeing sat down to design the B-17 Flying Fortress during the 1930s, their main objective was to create a bomber that could fly deep into enemy territory, carry a heavy payload and be capable of defending itself from enemy attack. In just a few short years, the plane was called to do all of that during the darkest days of World War II.

The Memphis Belle, one of the most storied B-17s of the war and the inspiration for a 1990 feature film starring Matthew Modine and Eric Stoltz, has been undergoing an extensive restoration at the National Museum of the United States Air Force near Dayton for the past 12 years.

“There are certain objects that really encapsulate our nation’s history and the Memphis Belle is one of those,” says Jeff Duford, lead curator for the Memphis Belle project. “It’s primarily for that reason that the museum is committing these kinds of resources.”

In March, the museum celebrated the installation of the aircraft’s wing tips — what Duford describes as one of the many milestones in the long restoration process before the aircraft can go on public display.

“When it first came here it was in parts and pieces and the wings weren’t on the aircraft,” he adds. “It wasn’t standing on its own gear.”

Now that the wings are complete, the team will turn its attention to installing machine gun turrets, as well as the aircraft’s tail and instrumentation. Recreating the Memphis Belle’s wartime nose art will soon be another milestone to celebrate. Referencing color scenes from the 1944 film “Memphis Belle: A Story of a Flying Fortress,” an artist will painstakingly recreate the 1940s pinup girl that once adorned the planes aluminum fuselage. Although the Memphis Belle will soon resemble its wartime appearance, the aircraft’s flying days are over.

“It will not be restored to be flyable — that is typically how we do our restorations here,” Duford says. “By restoring in that fashion, we retain as much of the original artifact as we can.”

The plane is scheduled to take its place in the museum next year, on May 17, 2018, the 75th anniversary of its crew’s last mission. The plane will be the centerpiece of an exhibit on strategic bombing in Europe during World War II.

“I would really like our visitors to understand the sacrifice of those young men and that they didn’t give up,” Duford says. “They kept getting in the airplanes, and what they did helped us win the war.”