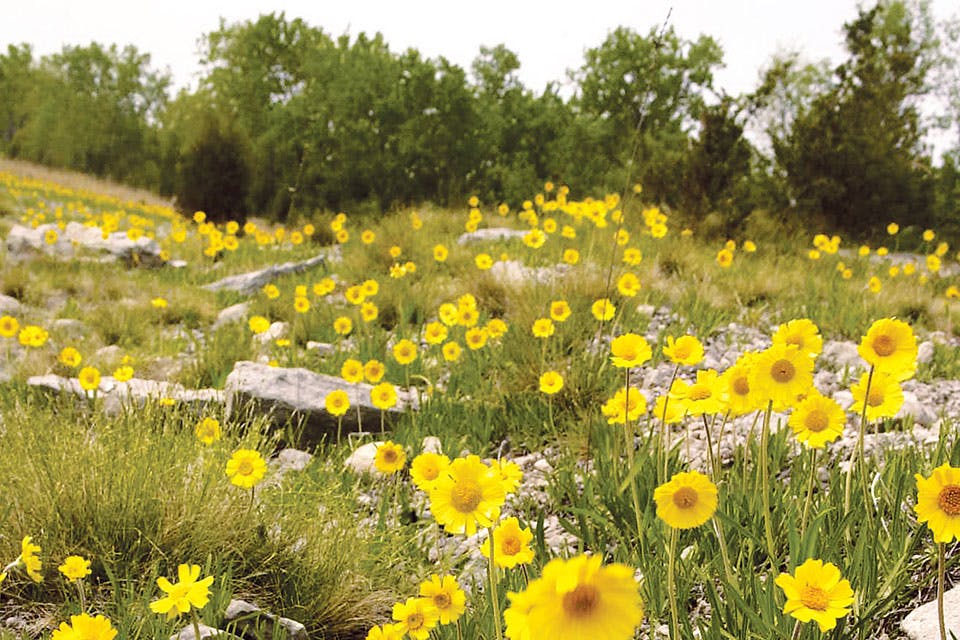 Designated in 1988, this Ohio preserve protects its namesake flower and is the only place in the nation where a substantial stand of them grow naturally.

Each May, the easternmost point of the Marblehead Peninsula is brushed with yellow — a bright, bold hue that smiles out from the petals of the tiny Lakeside Daisy. Just inches high, the small yellow flowers spring up from a generally bare, rocky surface. They’re short, unobtrusive and also a relatively rare find.

“[The flower] is naturally found in a habitat called an alvar,” explains Ryan Schroeder, manager of the Lakeside Daisy State Nature Preserve. An alvar occurs where limestone rock dominates the earth’s surface and soil depths are minimal or nonexistent. “Those habitats are really rare. Something like the Lakeside Daisy, you couldn’t plant it in your garden. It’s not going to be found in a natural prairie anywhere. It just cannot compete with taller vegetation.”

The 19-acre Lakeside Daisy State Nature Preserve is the site of a former limestone quarry and is the country’s only substantial natural stand of the Lakeside Daisy, which is federally designated a threatened species. (The flower can also be found in parts of Ontario, Canada, where it is also threatened.)

“A lot of the areas that have this [were] quarried away,” Schroeder says of the limestone. “So, most of those habitats were destroyed.”

Designated a state preserve in 1988, protection of the area was funded largely by tax-return donations.

“If you have Ohio income tax, you can donate a portion of your refund to various organizations or charities, and one of those is our nature preserve program,” Schroeder explains.

Scientists and rangers had long recognized the area’s importance. Balsam squaw-weed, rock sandwort and Great Plains lady’s tresses (a type of orchid) are other threatened species found at the preserve.

“It’s very fragrant; you’ll smell it before you see it,” Schroeder says of the orchid.

He explains that a lot of these plants are small because they’ve adapted to the harsh environment in which they grow. A short trail winds through the preserve and the Ohio Department of Natural of Resources asks that hikers stay on-trail to protect the flower and prohibits collecting the plants.

“May is always a popular time to visit,” Schroeder says. “Later in the summer, when the blazing stars and goldenrods are blooming, is also a good time as well.”